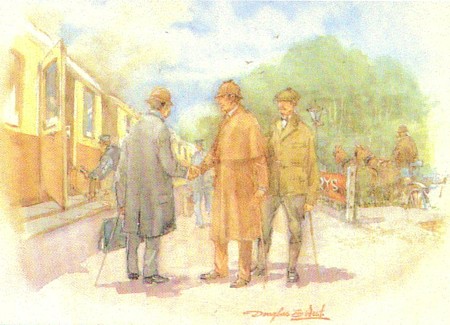 If you're in the Greater New York area this Spring, you're in for a treat. In addition to the regular happenings in and around town, there are two talks that you may want to attend.


The first takes place on at Yale University, where Glen Miranker, BSI ("The Origin of Tree Worship") will be giving the annual Adrian Van Sinderen Talk. You may remember Glen from Episode 79 of our show, where he told us all about his collecting mania. On Wednesday, April 20 at 4:30 pm in the Sterling Memorial Library Lecture Hall, he'll be giving a talk titled "When Is a Book More Than a Book?"


"a peculiar pastime. Why engage in such an abstruse and potentially costly activity when you can own reading copies at very modest expense? Pursuing and acquiring are only a part of bibliomania. Many books have a tale to tell beyond what's printed between their covers. Tracking down the backstory for my books is another thrill of the chase…and a principal reason to be interested in books as artifacts. We will explore this idea through a number of examples, demonstrating that book collecting is more than 'A Gentle Madness'—as Nicholas Basbanes so graphically describes it."

More information can be found here.


The Mystery Writers of America have a major Sherlock Holmes event coming up in June. The theme for the evening is Sherlock Holmes: Celebrating 125 Years of Perfection in Detection, marking the anniversary of Arthur Conan Doyle’s publication of “A Scandal in Bohemia” in The Strand Magazine, which became the first short story in the anthology The Adventures of Sherlock Holmes.

It should be a lively discussion of the lasting power of this iconic detective led by an all-star MWA-NY panel, including Lyndsay Faye, BSI ("Kitty Winter"), Otto Penzler, BSI ("The King of Bohemia"), and SJ Rozan, BSI ("The Imperial Palace of Peking").


We hope you enjoy some interesting and informative Sherlock Holmes-related events wherever your travels take you this spring.