The Adventure of the Peculiar Provenance — A Review 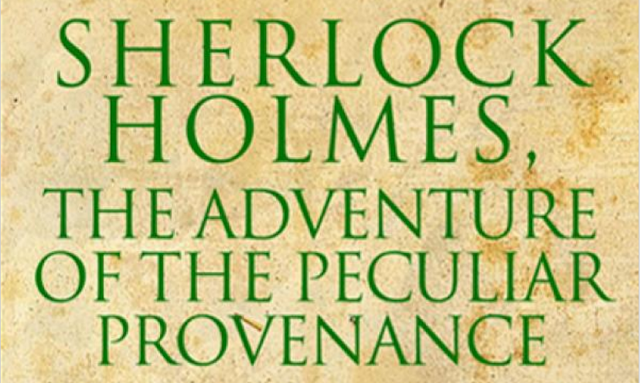 Sherlock Holmes and The Adventure of the Peculiar Provenance by Derrick Belanger is a traditional Victorian pastiche that brings Holmes to the fringes of the art collecting world in a case of forgery, robbery, and murder. [Editor's note: Derrick is a frequent contributor on I Hear of Sherlock Everywhere.]

It is winter in 1890, and Holmes and Watson are portrayed much like themselves. Watson has been absent from Baker Street, enjoying married life, but he is still the stalwart companion and admiring friend he always should be. Holmes has his feats of deduction, and moments of vanity, but most importantly gets to enjoy himself both in pursuit of the case and in everyday life. There are the occasional linguistic anachronisms, (for example, at one point Watson refers to a “cookie tin,” rather than a “biscuit tin,”) but they are few and minor.

Mr. Belanger does a wonderful job not only of reconciling Holmes’ friendship with Watson and Watson’s marriage to Mary, but of interweaving scenes of domestic life with the mystery plot. Mary even invites Mrs. Hudson and Holmes to supper, and Holmes not only accepts, but actually goes with full intention to enjoy himself with none of the uncomfortable awkwardness that would accompany so many modern incarnations of the Detective. It’s refreshing.

The Adventure of the Peculiar Provenance

is well-paced, with just enough action to balance the domesticity and deduction, and the plot is cleverly executed. I should have realized what was going on from the moment I read the words “criminal organization,” but I was having too much fun watching Holmes work.

The little forward at the beginning of the book explaining the ‘discovery’ of the story at first struck me as unnecessary (this story stands on its own just fine, I neither require nor desire justification for its existence as yet another ‘lost tale’ of Watson,) but the comments in the author’s afterword suggest it’ll come into play in future stories. Mr. Belanger has set himself up for a series, and he has started with a strong first installment.

To quote one of the more self-referential moments of the book,


“Why Holmes … this is beginning to sound like a vast conspiracy of crime one reads about in those penny dreadfuls.”

“Indeed, Watson,” Holmes agreed. “It does have the air of a well-crafted tale about it.”

A well-crafted tale is exactly what it is, and I look forward to more to come.

Sherlock Holmes and The Adventure of the Peculiar Provenance is available on Amazon in paperback and Kindle formats.