The Countdown to the #SherlockPBS Special Is On

"we have three days yet" [SCAN] 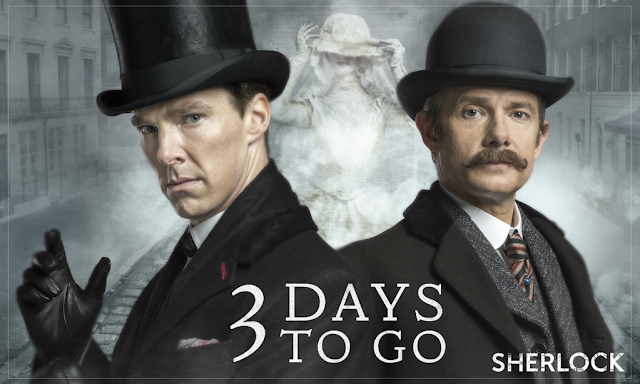 Once again, the excitement is mounting as fans await the latest installment of the Sherlock

franchise. This is the first new programming to air since the conclusion of Series three in January 2014, so the two-year wait has frustrated a number of fans of the show.

You may recall that I Hear of Sherlock Everywhere was tapped by MASTERPIECE Mystery for each of the previous three series to host a live Twitter chat during the premieres. We had a wonderful time and are honored to have been asked to fill that official capacity once again, along with Yahoo TV's Dave Nemetz (@Dave_Nemetz) on the East coast and Les Klinger, BSI ("The Abbey Grange") (@lklinger) on the West coast.

You can join us at 9-10:30 pm ET/PT on Friday, January 1, 2016 as we live-tweet along with the episode. Just follow @IHearofSherlock on Twitter to see what we're saying. You'll also want to follow @MasterpiecePBS as well.

In case you're not familiar (or need a refresher), a Twitter chat is simply a live commentary that runs along with the television program; it is meant to act as a complement to the show. Think of it as a living, breathing, trivia section from IMDb.com, with interaction and observations. Our particular area of interest is finding references, quotes, characters and and such from the original Sherlock Holmes stories as they appear in this modern production, and pointing them out with the #Canon hashtag. We'll also be using #SherlockPBS and referring to the special as ABOM, in concordance with the Jay Finley Christ abbreviations for the original stories.

But it doesn't end there! You can add your own commentary as well — just be sure to use the #SherlockPBS hashtag so it can be seen. Like Sherlock Holmes relied on the Baker Street Irregulars, we'll be relying on you as additional eyes and ears during the show. Let everyone know you're participating:

I'm joining the #SherlockPBS ABOM Twitter chat with @IHearofSherlock and @MasterpiecePBS on Jan 1.

Of course, if you miss the premiere on January 1, you can always see the rebroadcast on January 10. And if for some reason you don't have access to a PBS station on your television, you can watch online at pbs.org/masterpiece. And regardless of how you watch on the small screen, this might be a great opportunity to see ABOM on the big screen as well.