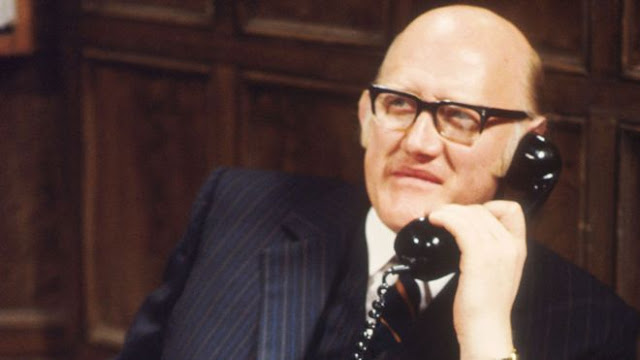 Nicholas Smith, who famously portrayed the bewildered store manager Mr. Rumbold in the comedy series Are You Being Served?

has passed away, at the age of 81, according to the BBC. Smith had been in hospital for some weeks following a fall and died on Sunday.

While he made a name for himself from 1972 through 1985 as Cuthbert "Jug Ears" Rumbold in the comedy set in a London department store, Sherlock Holmes fans may know him from his appearance in the 1975 Gene Wilder farce The Adventure of Sherlock Holmes' Smarter Brother. But you may not know him from one other Sherlockian reference.

While the film does not have many redeeming qualities about it overall, there are a few gems sprinkled throughout, including Leo McKern's delicious Professor Moriarty, who has to do something absolutely rotten every 24 minutes ("YES! YES!"), and Dom DeLuise's overwrought Italian opera singer Gambetti.

But for us, Smith stole the show with his unexpected and unorthodox appearance as Hunkston, the landlord with the dainty touch:

As a bonus, Peter Blau, BSI, 2s ("Black Peter") informs us that Smith played another unexpected role, as reported in the April 1997 issue of Scuttlebutt from the Spermaceti Press:

Ernest Dudley's play "The Return of Sherlock Holmes" (in which Eille Norwood starred in 1923) was recently produced in Newcastle upon Tyne, with Michael Cashman as Holmes and Frederick Pyne as Watson, and Nicholas Smith as Milverton. Nicholas Smith has been seen here for many years on some PBS-TV stations as the bald, jug-eared, store manager in the British series "Are You Being Served?" (and if you've seen the series you will know how unexpected he is a Milverton).

Smith was the last surviving member of the original cast of Are You Being Served? and more recently played the role of the eccentric Reverend Clement Hedges in Wallace and Gromit's The Curse of the Were-Rabbit