"metal dangling down as an ornament" [REDH] 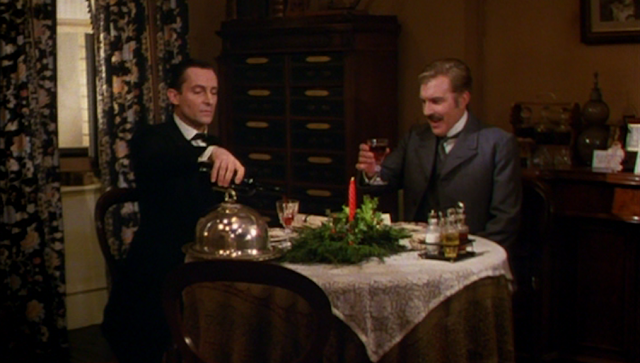 Last year, we brought you stories and images courtesy of Peter Blau, BSI, 2s. ("Black Peter") that highlighted his Sherlockian Christmas tree and many of its unique and Canonical ornaments. [If you'd care to see them and listen to the origins, it's available as IHOSE Episode 72: Sherlockian Tannenbaum.]

But we had embarked on a different project in 2013 when we asked our readers to submit pictures of their Sherlock Holmes-inspired Christmas ornaments. However, that never saw publication. While we'd like to think we were following Dr. Watson's judgement in "The Sussex Vampire" — in which he noted that the case of the giant rat of Sumatra was "a case for which the world was not yet prepared" — the reality is that we were not prepared to do all of the necessary editing during the Christmas season.

This year, we're happy to say that we're all caught up and we're planning five days of Christmas-related content, of which this is the first.

For many people, gingerbread men and gingerbread houses are just as much a part of Christmas as fruitcake, goose and egg nog. This first entry dates all the way back to 2010 from an entry on Susie Day titled "221B Bakery Street" and it features the likenesses of Sherlock and John: 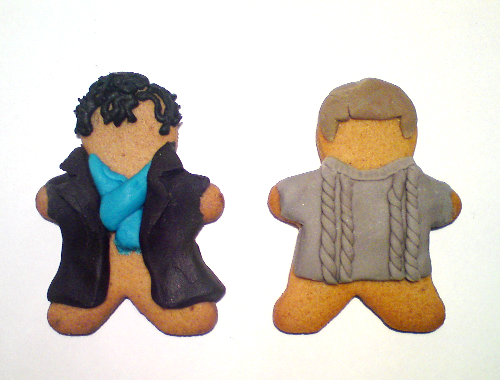 Then we were delighted to find a gingerbread creation by Peggy Perdue, BSI ("Violet Westbury") on her Facebook page, which she called 221G Baker Street. The entire thing is edible, according to Peggy. 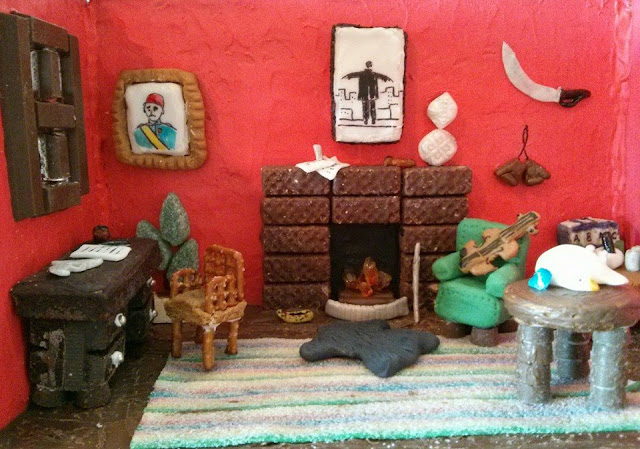 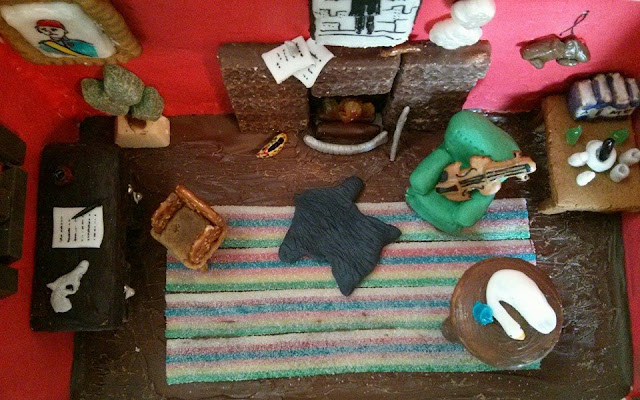 The details are impressive, from the correspondence transfixed to the mantel with a jack knife, to the blue carbuncle and the goose, to the bearskin rug, the boxing gloves, the portrait of General Gordon and the updated Reichenbach Fall scene over the fireplace. "They were ornamented" [SUSS]

Our call for Sherlockian ornaments netted many contributions via email, but we also picked up a few via Facebook. 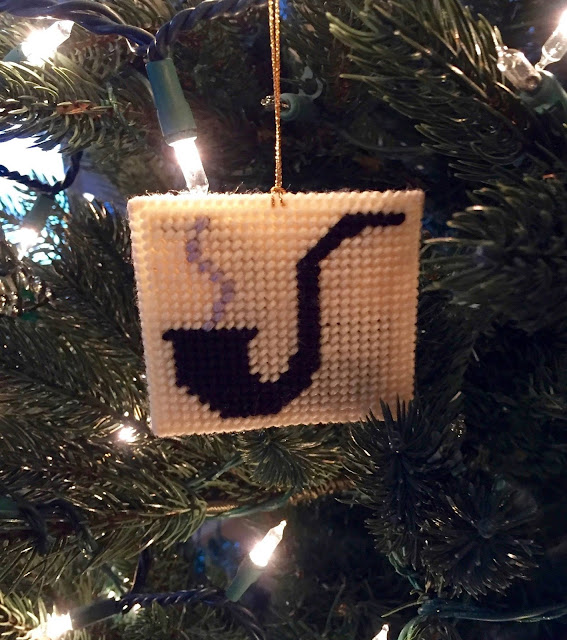 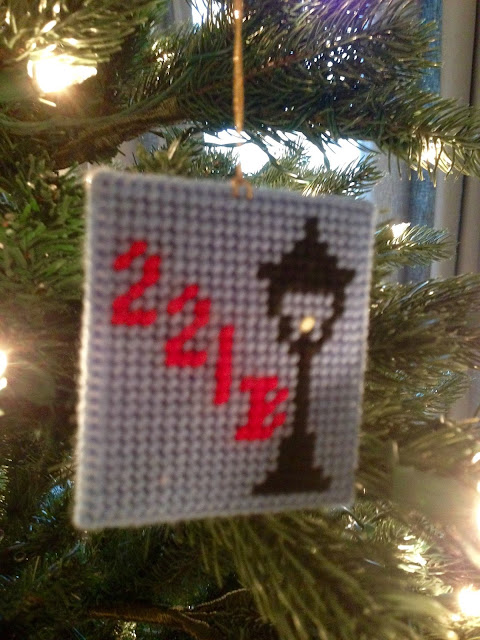 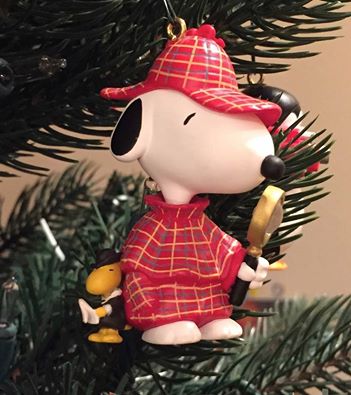 And this rather unique decoration came from Ray as well. Ray writes on Facebook:


"This is a figure known as 'El Caganer', a traditional addition to Catalan region nativity scenes. The figure is traditionally a peasant, but in recent years there have been versions modeled after popular entertainers and other contemporary figures. This figure shows Sherlock dropping trou and emptying his bowels (I'll save you the posterior shot), and is one of the more unusual pieces in my collection." 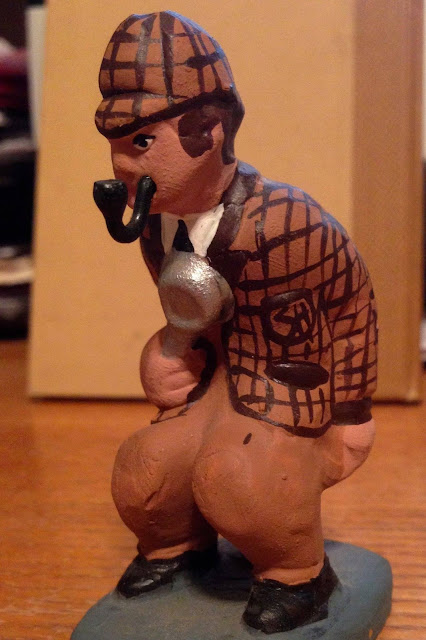 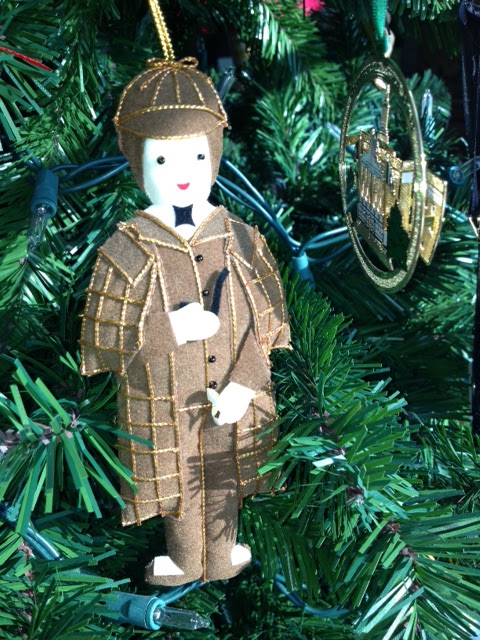 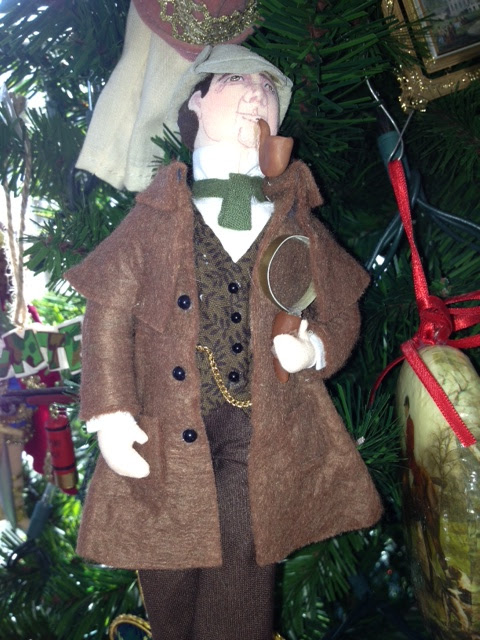 Scott Meyer sent us a snap of a rather unique ornament. He writes:


"[This is] a homemade Sherlock Holmes ornament given to me by my sister in law Christian Terrell, who is a local artist. It is a sphere connected to Victorian era-ish house key on a 221b key chain, and the sphere contains small notes with the names of each of the canonical stories." 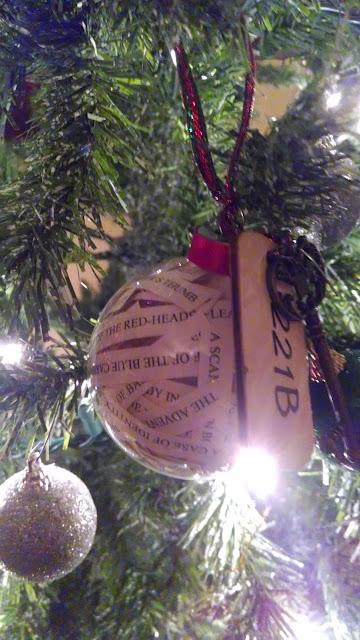 Harrison "Terry" Hunt, BSI ("The Something Hunt") tells us that this was a gift from one of his wife's daughters and her family — "hand-blown glass and cloth, made in Italy." 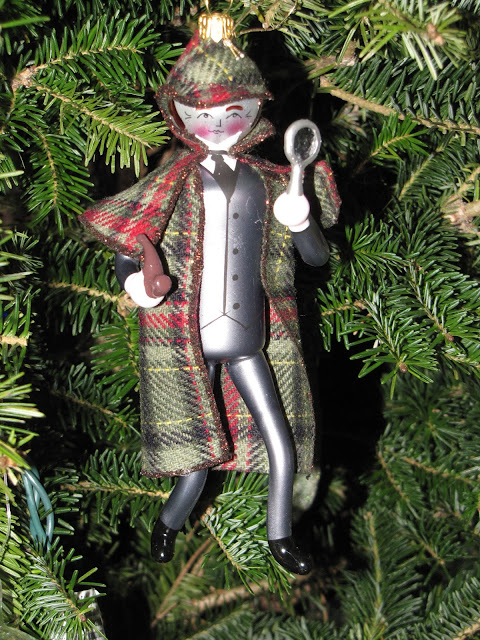 David Marcum sent us an email just after we went live with this update:
"...our fireplace mantel, with my very first deerstalker (the first of many), retired and hanging in a place of honor (see left side), and Bosson figurines at the top of Holmes, Watson, and Professor Moriarty - they're there all the time. But this time of year a Christmas village magically appears, along with a few protective Nutcrackers (including one that looks something like a mustachioed Holmes). And of course, the Professor puts on his festive Santa hat . . . ."


"I have worn deerstalkers as my regular and only hat, from fall to spring, since I was 19 - and I'm 50 now, so that's a long time to be representing the deerstalker in public. But on Christmas Day, I wear it this way." 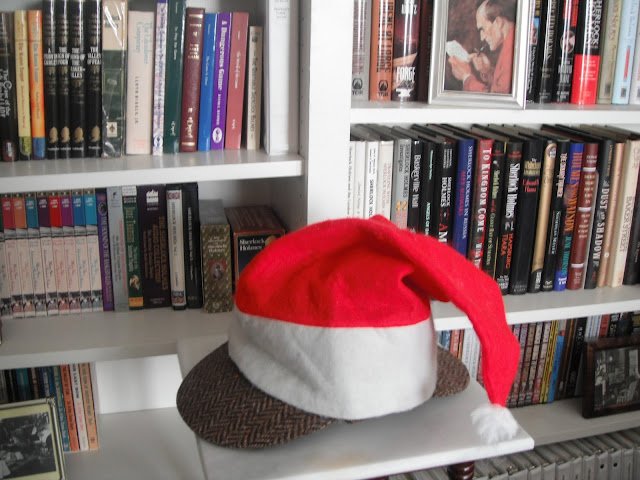 And finally, here are a few shots from our own collection:

Sherlock Hemlock, the world's greatest #Christmas ornament!
A photo posted by I Hear of Sherlock Everywhere (@ihearofsherlock) on Dec 22, 2015 at 9:19pm PST


Bearlock Holmes is on the case. #Christmas
A photo posted by I Hear of Sherlock Everywhere (@ihearofsherlock) on Dec 22, 2015 at 9:16pm PST


It's a blue carbuncle, my dear Woodstock.
A photo posted by I Hear of Sherlock Everywhere (@ihearofsherlock) on Dec 24, 2012 at 12:19pm PST