“we are getting some cards” [SHOS]

Regardless of how one celebrates Christmas, it undoubtedly includes some type of tradition. One of the traditions that we enjoy is sending and receiving Christmas cards to and from fellow Sherlockians.

One of those is a Jerry Margolin, BSI (“Hilton Cubitt”), who made an appearance in the first Collectors’ Corner on Episode 16 of the I Hear of Sherlock Everywhere podcast. If you listened, you may recall that Jerry is the leading art collector in the Sherlockians world, and he delights in sharing his collection with others. [If you haven’t listened yet, now is a great time.] But an audio show can only do so much to bring the wonders of an art collection to you, so we’ve got something else.

As his collection began to grow some 40 years ago, Jerry started his own tradition by taking his artwork and turning it into cards for the holiday. We’re fortunate to have been on his “nice” list for a number of years, and we decided to ask Jerry about the story behind the cards - and to share the cards to date with you.

I Hear of Sherlock Everywhere: When did you first start this tradition? What made you decide to do it?

JM: As to the question about how this card madness got started, it really was quite innocent. I moved to Oregon in 1976, and had been to two BSI dinners, while still living in NY. I had met a few Sherlockians at the dinner, but I was 20 something and new to it all, having only started collecting a couple of years before.

I had started corresponding with some people such as John Bennett Shaw, also, a new friend, Andrew Peck and some others when it finally arrived at the holiday season. I received a couple of greeting cards with a Sherlockian theme and thought that was really fun. Fortunately for me, my upstairs neighbor was a graphic artist, so I asked her if she would do a quick drawing of Holmes to use as a card illustration? She did and then I had to find a printer to make the cards. I had printed up way too many at the time, maybe 80? I was optimistic about all the people I would meet and get to know in the Sherlockian world, what did I know at the time?

In any case, I got addresses for as many people as I could and hand wrote out each card and happily mailed them off. Amazingly, I started to get many responses and found that others were doing this also and I accumulated quite a stack of incoming cards. This encouraged me to do another for the next year and so on. I had no idea that it would take on a life of its own and become so looked forward to by so many people in the coming years. I started dating the cards in 1980.

IHOSE: How many cards do you send out? Has that list grown over time?

JM: Well, as I stated in the first answer, I just threw out a number to the printer and the card had no limitation printed on it, not even a date. So the next year having received a goodly number of cards, I decided on 50 and figured I would have leftovers to send if I got a card from someone I didn’t really know. As the years went on and I became better known in the Sherlockian world, I began to correspond with more Sherlockians around the U.S. and the world. I developed a list of “regulars” and brought the list to a firm 65.

From time to time over the years, the list has grown and shrunk sometimes unfortunately to the loss of friends who passed beyond the Reichenbach. As time went on I added a few here or there and occasionally people heard about the cards. Some asked if they could be added. I do about 56 cards now, but always have a few extra just in case. I do put the limitation on the card.

IHOSE: You have over 2,500 pieces of Sherlockian art in your collection. How do you go about deciding which to select for a card each year?

JM: Whenever I get a new piece of art, I look at it to determine if it might make a good card and be a piece that will interest the people who receive them. There is no real rhyme or reason to it. I wish I could say I use some form of Sherlockian deductive reasoning to make my choices, but no, I just decide on the fly. In iPhoto, on my computer, I do have about 15 pieces set up to be used for the next many years and have already picked the card for next year; no I won’t tell you which one.

I am always thrilled by the responses I get when the cards begin to arrive at their destinations. A lot of people have been kind enough to write me and tell me what they like about the art and how fun it is to receive it. It makes it worthwhile. As I said earlier, it has taken on a life of its own and the cards seem to be much sought after which thrills me to no end. I always send them out the day after Thanksgiving, and they have now come to signal the beginning of the Sherlockian season. One or two people over the years have tried to beat me to being the first card, though I don’t think anyone ever has, though I guess I shouldn’t say that. Someone will send one out after the 4th of July.

IHOSE: Of the cards you've sent out, which are your personal favorites? Why?

JM: Wow, that is a tough question, I love my art collection and I do have favorites that are obvious such as the Paget and Steele originals, also the original from Jimmy Stewart, Gahan Wilson and John Romita Sr. who drew Spiderman, for me, as Holmes. Those would be in my top certainly. 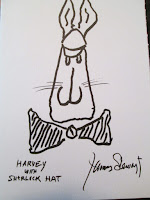 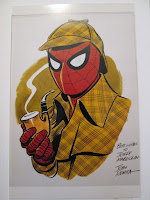 One of my all time favorites was the Will Elder (MAD Magazine artist) who was a close friend for almost 40 years. It was Holmes and Watson running down a railroad track saying “At last Watson, we’re on the right track!!“ It is a favorite because it was the only year in which I issued a very limited (about 12) extra cards that inside contained a color piece of art by Will of his character “Little Annie Fannie” wearing nothing but a deerstalker! I kept one and sent the rest to a very select group of people. I got some interesting responses to it, some not so great, but most enjoyed it. 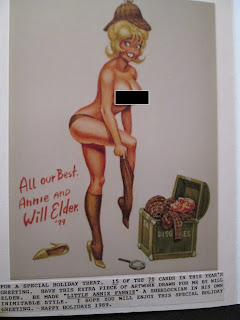 Lastly, the Paget and Steele art since they are the crown jewels of the collection and pieces; to this day, I am always stunned that I own them. They were not in my thought process way back when that they would ever grace my walls. I am glad I could share them with my friends in the Sherlockian world.

The following is a complete set of Sherlockian holiday cards from Jerry Margolin. Jerry has provided a description for each one in his own words. If some of the images are out of focus, it's because some are not scans but rather photos taken of the artwork as it hangs on the wall.

We’ve always thoroughly enjoyed receiving Jerry’s cards, and we always anticipate the early arrival of them. We’ll be looking forward to next year’s card with continued excitement!