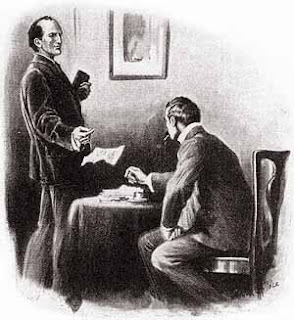 I come today to chide the author of the Sherlock Holmes tales, but it is only fair to mention some of his good qualities first. Indeed, I have often pointed to Arthur Conan Doyle Dr. John H. Watson as a paragon of English prose style, and others have done the same.

"There was no mistaking the ingenuity of the plot, the limpid clearness of the style, the perfect art of telling a story," wrote Herbert Greenhough Smith, the editor of the Strand Magazine when the Holmes short stories arrived on his desk in 1891. Lyndsay Faye, whose own detective stories have received more than a few compliments, observed in an interview earlier this year that

"Doyle's style is so readable that people fail to notice how technically contradictory it can be. It's straightforward in meaning, but full of Victorian flourishes; its details are subtly painted, but the subject is trained killer snakes."


And, she added, it's maddeningly difficult to emulate ACD convincingly.

"Language… has to be Victorian, but never antiquated, and that's difficult. Some of the sentences in the canon last two or three words, and others smoothly sail along for thirty or so. Many people simply cannot hear the voice."


Amy Thomas, herself the author of three Sherlock Holmes novels (though not in the Watsonian voice) made similar comments in her blog a few months ago.

And back in 2004 an entire little book appeared, Looking Over Sir Arthur's Shoulder

, by Charles Press, attempting to analyze readability, "balance between realism and romance", plot, character, humour, and many other factors that made the Holmes stories so successful in the 1890s that they are still admired now. 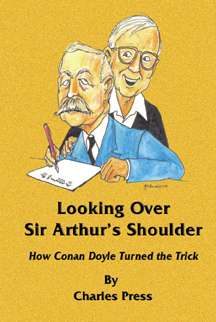 Accepting Doyle Watson as a narrative genius, then, and his prose style as the platonic ideal of how English should be written, I find myself wishing that these authors had said a little about a specific element of style, namely grammar. I assumed for many years that the grammar of the Holmes narratives — the Canon, as we call it — was impeccable, except of course when the author was rendering the conversation of imperfectly educated persons such as Kitty Winter ("she don't know") and Sam Merton ("Madame Tussaud ain't in it"). A more complex example of this phenomenon is found in The Valley of Fear, when Jack McMurdo, as he is calling himself, demands rhetorically: "Do you think there is no weaker brother among all our lodges that could not be bought?" A few minutes' cogitation will, I think, confirm that this sentence contains a double negative, contradicting McMurdo's intended meaning, but the error probably sailed right over the head of the wicked (though eloquent) Boss McGinty.

Lately, I have come to realize that in the 660,382 words of the Canon, there are no fewer than three — three! — grammatical errors that must be attributed to the author rather than to faithful rendition of the speech of imperfectly articulate characters. Let me quote these three horrors, abridging the sentences without altering their structure:

I was an English teacher only briefly, and an editor for most of my working life, so I will not cite definitions from the 672-page Oxford English Grammar, and will, as we say, cut to the chase. The first sentence is correct only if what was framed in the light of the doorway was "it"; in other words, we have here a dangling participle. The second sentence has redundant words leading to a faulty parallelism: "He must either sacrifice… or use" would be sufficient, without the second "he must". And the third sentence has a different kind of parallelism problem, in which the first and third elements of the sentence are clauses, while the second can hold up its head beside them only if "paid our fare" is amended to "we paid our fare".

But you, as a discerning reader, recognized the errors the moment you read them, didn't you? I wish I'd spotted them sooner, rather than after some fifty years of reading the Canon over and over. Maybe it's true that you only see what you're looking for.