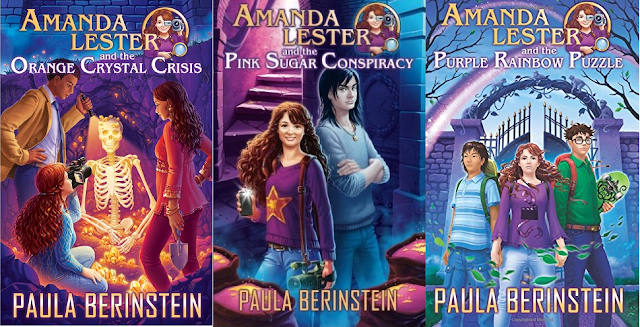 Amanda Lester and the Pink Sugar Conspiracy is a smashing Holmesian debut from Paula Berinstein. The book involves a plucky young girl by the name of Amanda Lester who is a descendant of Inspector G. Lestrade, the Scotland Yard client of Sherlock Holmes. Despite her rich ancestry, Amanda wants nothing to do with Inspector Lestrade nor with the world's first consulting detective. She would rather be a film student than work on solving a mystery.

Poor Amanda is out of luck as her parents, who don't understand her, send her away to The Secret Detective School, a Hogwarts of sorts for descendants of famous detectives. At the school, Amanda must help her friends solve a mystery involving murdered cooks, sugar powered weapons, and the evil descendants of Professor Moriarty.

What I found particularly compelling was how rich and believable the teen characters are in the book. As a middle school teacher, I always look for books to share with my students, and I know my students, especially the girls, will find Amanda Lester a character they can relate to. Facing the dilemmas of parents who don't understand her, crushes which are unrequited, and friends who are not always friendly, Amanda is a character all students can understand. I highly recommend this book to all lovers of mysteries and young adult literature. I look forward to reading the further adventures of Amanda Lester in books two and three, and hopefully more!


I had the opportunity of interviewing author Paula Berinstein about her Amanda Lester series and its connection to the world of Sherlock Holmes.

I Hear of Sherlock Everywhere: I have described Amanda Lester and the Pink Sugar Conspiracy as a cross between a Sherlock Holmes pastiche and a Nancy Drew adventure with a touch of Harry Potter added to the mix. Would you agree with this description?

Paula Berinstein: Oh, wow. That is so flattering! I’m so glad to hear you describe the story that way. I guess I would agree, although  up until now I’ve never thought of the book as a Nancy Drew adventure, and I thought a Sherlock Holmes pastiche had to include Holmes himself. (I looked up the definition and it doesn’t.)

IHOSE: Amanda Lester is a descendant of Inspector G. Lestrade. Why of all the characters in the canon did you pick Lestrade?

PB: It is a bit of an odd choice, isn’t it? I picked him because he’s a minor character, and I’m so curious about minor characters. Each minor character is the star of his own story, which we never get to hear. I want to know more about all these stars in waiting.

But I picked Lestrade specifically because I wanted to give Amanda an obstacle to overcome. I liked the idea of her being descended from a complete twit her family thinks is the bee’s knees. She gets constant pressure from her parents to live up to Lestrade’s example. Lestrade! And then of course when they send her to the secret school for the descendants of famous detectives, she’s so afraid people will find out who her ancestor is. She’s hobnobbing with the scions of legends like Lord Peter Wimsey and Hercule Poirot (not specifically mentioned for copyright and trademark reasons) and here she is a Lestrade. Ouch.

PB: I’m going to keep mum on this for now. Wait a few books and you’ll find out.


IHOSE: You do an excellent job capturing adolescent characters in your novel. One of my favorite characters is Ivy, Amanda's blind roommate. Did you do a lot of research on the blind to develop this character?

PB: I’m glad you like Ivy and the other kids! No, I didn’t do research on the blind. I just tried to imagine what it would be like to be blind. I do that sometimes—pretend that I’m blind or missing a hand or something like that. I like trying to understand what it feels like to be someone else, and of course, who knows? Anything can happen to anyone at any time. It helps to know what to expect. (I suppose I sound like a complete weirdo saying that. I guess I just have an active imagination.)

IHOSE: How much did your background in film influence your writing of this book?

PB: I’m tempted to say that I don’t have a background in film, but I suppose I do. I’ve been around the movie industry all my life so I guess that has influenced me a lot. What’s funny is that in my original story, Amanda was going to be a young woman who was trying to escape her family’s academic background by becoming a plumber’s apprentice. She was never going to have anything to do with film. Then, when I decided to make her a kid, I wanted to give her something that was way outside her parents’ comfort zone, so I chose film. As it happened, there was a lot I could do with film, so I’ve used it extensively in the series. Do you sense a pattern here? I think I do things by instinct a lot. The Nancy Drew, the film, etc. I don’t think about those things much. They just happen because they’re part of me. 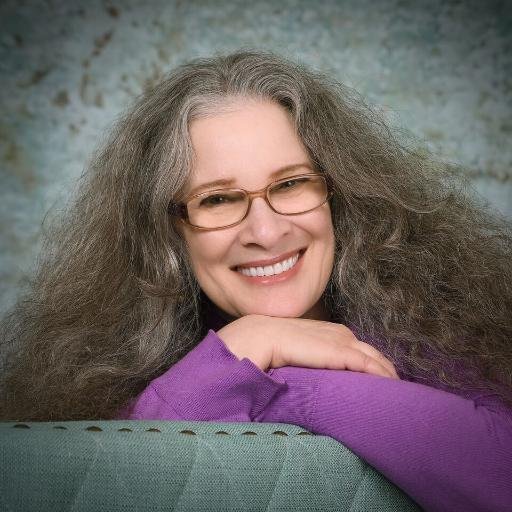 IHOSE: What is The Writing Show mentioned on the back cover of your book?

PB: The Writing Show is the podcast I produced and hosted from 2005 to 2012. All the shows are still available on iTunes and on my site at www.writingshow.com for free. There are about 350 of them. The show offers information and inspiration for writers in the form of interviews, panel discussions, readings, reality shows, and more. It's all audio, so you can listen while you walk or drive. I have published a number of books under the aegis of the show, not all of them my own.

IHOSE: Tell us a little about the other books in the Amanda Lester series.


PB: In the second book, Amanda Lester and the Orange Crystal Crisis

, Amanda meets a descendant of Sherlock Holmes, and does she take an instant dislike to him! Of course he’s crazy about her, so you can imagine how annoyed she gets. I don’t think it’s giving too much away to tell you that the kids find a skeleton (it’s on the cover), and much of the book involves them trying to figure out who it is. (You will never guess.)

In the third book, Amanda Lester and the Purple Rainbow Puzzle

, a dangerous hacker emerges and the kids think they’re seeing zombies all around the English Lake District.

In the fourth book, Amanda Lester and the Blue Peacocks’ Secret, which I’m writing now, we get into the school’s back story and the kids battle a new enemy. And in the fifth book, Amanda Lester and the Red Spider Rumpus, which I’ve completely outlined, an odd new student comes to the school and gets everyone in a tizzy, plus the kids discover the aforementioned spiders, who have some very interesting abilities. Of course there are monkeys in all the books too. Readers seem to like them. 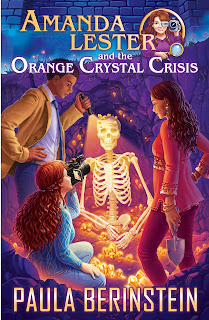 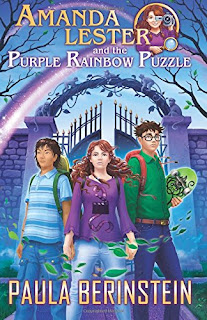 IHOSE: The question we ask all Sherlockians. If you were stranded on a desert island with only one Sherlock Holmes story, which would it be and why?

PB: The Hound of the Baskervilles! It’s so creepy and atmospheric and dark. In fact, I got so inspired by the setting that I asked my husband, who is English, if he’s ever been on a moor at night. I’d love to go! I also like the fact that it’s one of the longer stories. When I enjoy a story I want it to go on forever, and this one just about does.

PB: I will be doing a two-week blog tour starting November 30, 2015. The tour will include a guest post on December 11 entitled “Paula B’s Crazy Character Name Generator” (http://creativityandcrazy.blogspot.com/) and another one, probably on December 7th, called “Lights, Action, Book Cover” (http://www.lolasblogtours.net/). I wrote the first one because so many people ask me how I come up with my character names (e.g., Particle Peaksribbon), and the second one because people ask how my artist and I did the covers. I think your readers might enjoy these.

Also, I am available to give talks about the books, including how I create my covers, simple forensics (I’m taking some classes on that, and boy are they interesting), and writing. Just contact me at paula@writingshow.com if you’re interested. (I am located in the Los Angeles area.) I am also producing some Amanda games, which I think people will enjoy. You can find prototypes of the jigsaw puzzles on my site at amandalester.net, but there will eventually be others as well. Please look for those.

Paula Berinstein is the former producer and host of the popular podcast The Writing Show. She lives in Los Angeles.