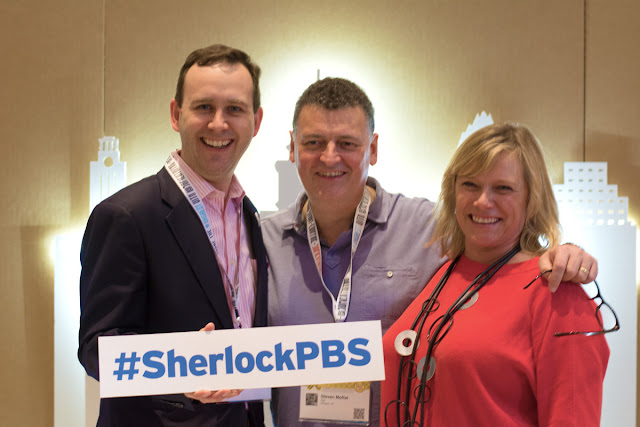 Anyone who has been following Sherlock Holmes on television and in popular culture over the last five years or so should be familiar with the names Steven Moffat and Sue Vertue. Steven is showrunner, writer and producer for Sherlock

, and Sue is a producer of a number of programs, including Doctor Who and Sherlock, as well as of numerous British television comedies.

Steven and Sue met at the Edinburgh Television Festival in 1996 and joined Hartswood Films, where Steven wrote a comedy based on their budding relationship, which became Coupling. And it is their coupling on Sherlock that we speak with them.

On January 1, 2016, the world premiere of Sherlock: The Abominable Bride

happens on BBC One and PBS. This is the first time the show has aired on the same day in both countries, and the excitement is palpable. The setting is London in 1895 and the trailers have shown a dark and mysterious atmosphere.

We take the time to discuss the making of show with Steven and Sue, as well as surprises, challenges and delights along the way. We ask the question everyone has been dying to know: how much longer will Sherlock go on? And we get an answer! We also learn a surprising fact about Sue (!) and get some great send-off advice from Steven, with much great information in between.

We have a dual feature for this episode's Gas-Lamp: an actual Editor's Gas-Lamp from Vol. 11, No. 4 (1961) called "Yes, Virginia, There Is a Sherlock Holmes" by Julian Wolff. And Jay Finley Christ's classic poem "The Old Tin Box."

We know we're mediocre at telling you about supporting us via Patreon. Make sure you listen to the end of the show for someone who knows what he's talking about.

A special thank you to Mary Miller and Christian Mongaard for your extraordinary support!

This episode includes our two longtime sponsors that deserve your attention:

The Wessex Press, featuring Sherlock Holmes, Conan Doyle and The Bookman, and The Baker Street Journal, where you should get your annual subscription in now to secure all four issues and a very special Christmas Annual about The Seven Per-Cent Solution.

Interested in becoming an advertiser? You can find more information here.

1:46 Welcome and hear what Scott got Burt for the holidays
3:05 One item worth mentioning from the Gift Guide
8:00 Our Facebook hack
9:56 Listener mail
11:01 Steven Moffat and Sue Vertue introduction
12:32 Welcome Steven and Sue
16:00 Some surprising information about Sue
19:50 What sent them back to 19th century London?
24:45 How much longer Sherlock will go on
26:47 Other stories that might be the subject for future episodes
30:25 One message for Sherlockians from Steven Moffat
32:56 You won't want to miss this
38:47 Post-interview chat, Twitter chat during Sherlock: The Abominable Bride

Many more links, articles and images are available in our Flipboard and Scoop.it sites at ihose.co/flipsherlock and ihose.co/scoopsherlock, as well as on the The Sherlock Holmes Community on Google+ (now over 2,800 members), as well as through our accounts on Facebook, Twitter and Tumblr.