"he had lit the oldest" [SHOS] 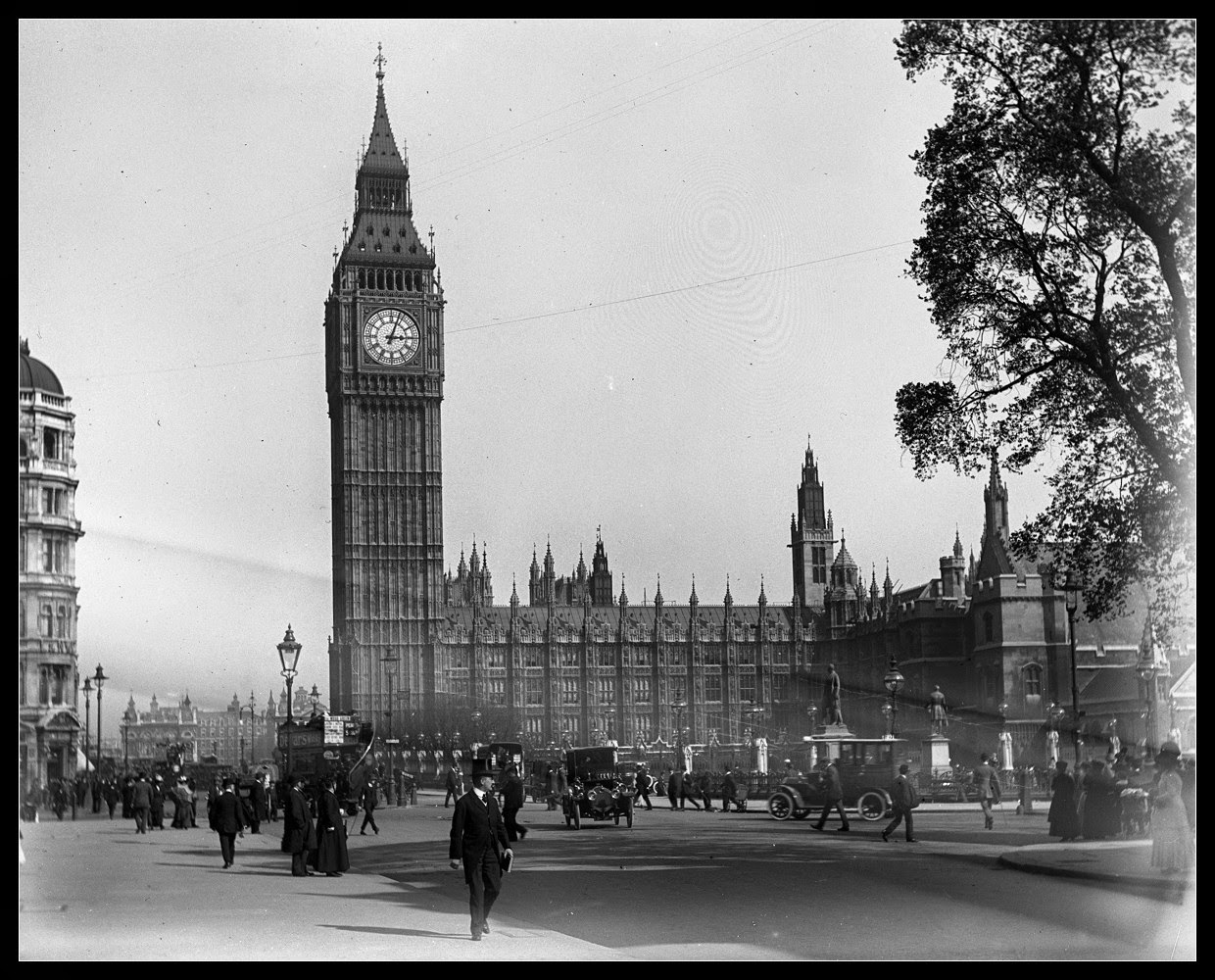 Recently on our Facebook page, we shared an old post in honor of #TBT (Throwback Thursday). The 1927 footage of London in full color was really something to behold, as we're used to only seeing black and white images and early footage from that era.

Now, thanks to author Dana Cameron (@danacmrn on Twitter), we discovered more film from London of Sherlock Holmes's time - only in this case, it's the oldest known footage of that venerable city that Watson called "that great cesspool into which all the loungers and idlers of the Empire are irresistibly drained." [STUD]

Have a look at the video of the oldest footage of London ever, which chronicles three decades from 1890 through 1920, and join us after the break below to see exactly where the footage intersects with the Sherlock Holmes tales.

Westminster is featured in a number of the stories, which makes sense as it is the spiritual heart of London, with its Jacobean Houses of Parliament and Clock Tower (more commonly, if erroneously, referred to as Big Ben).  In The Sign of Four, Sherlock Holmes requested transportation originating from the area:
"Well, then, in the first place I shall want a fast police-boat - a steam-launch - to be at the WestminsterStairs at seven o'clock."
In "The Disappearance of Lady Frances Carfax," it was a different form of transportation, shared with the Hon. Philip Green that put Holmes and Watson in the vicinity: "as we drove swiftly past the Houses of Parliament and over Westminster Bridge."

But the story most closely associated with Westminster is "The Second Stain," in which newspaper headlines bleated "MURDER IN WESTMINSTER" regarding the death of Eduardo Lucas in Godolphin Street. Number 16 Godolphin Street was described as being part of


one of the old-fashioned and secluded rows of eighteenth-century houses which lie between the river and the Abbey, almost in the shadow of the great tower of the Houses of Parliament."

After digesting the news from the Prime Minister and European Secretary and linking it to the Godolphin Street murder (even though it was an extraordinary coincidence), Holmes said, "Put on your hat, Watson, and we will stroll down together to Westminster."

And it didn't escape us that that the Houses of Parliament were the primary visual cue in the title card of the 1988 comedy Without a Clue, starring Michael Caine and Ben Kingsley. 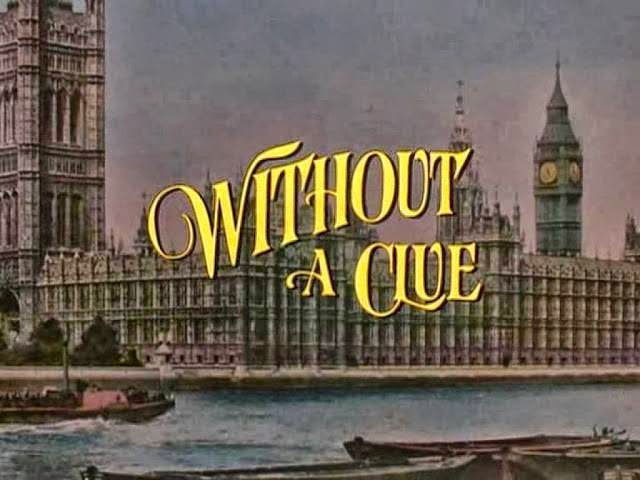 There is only one mention of Embankment in the Canon, and that is around the death of John Openshaw in "The Five Orange Pips." When Openshaw's body was discovered near the Waterloo Bridge, Sherlock Holmes wondered, "How could they have decoyed him down there? The Embankment is not on the direct line to the station."

The footage above at 2:13 shows Blackfriar Bridge in 1896. As the pedestrians pass, one can picture Holmes and Watson strolling along the same path at one point.

There is but one mention of St. Paul's, and once again, as with nearly all of the river scenery, we return to SIGN: 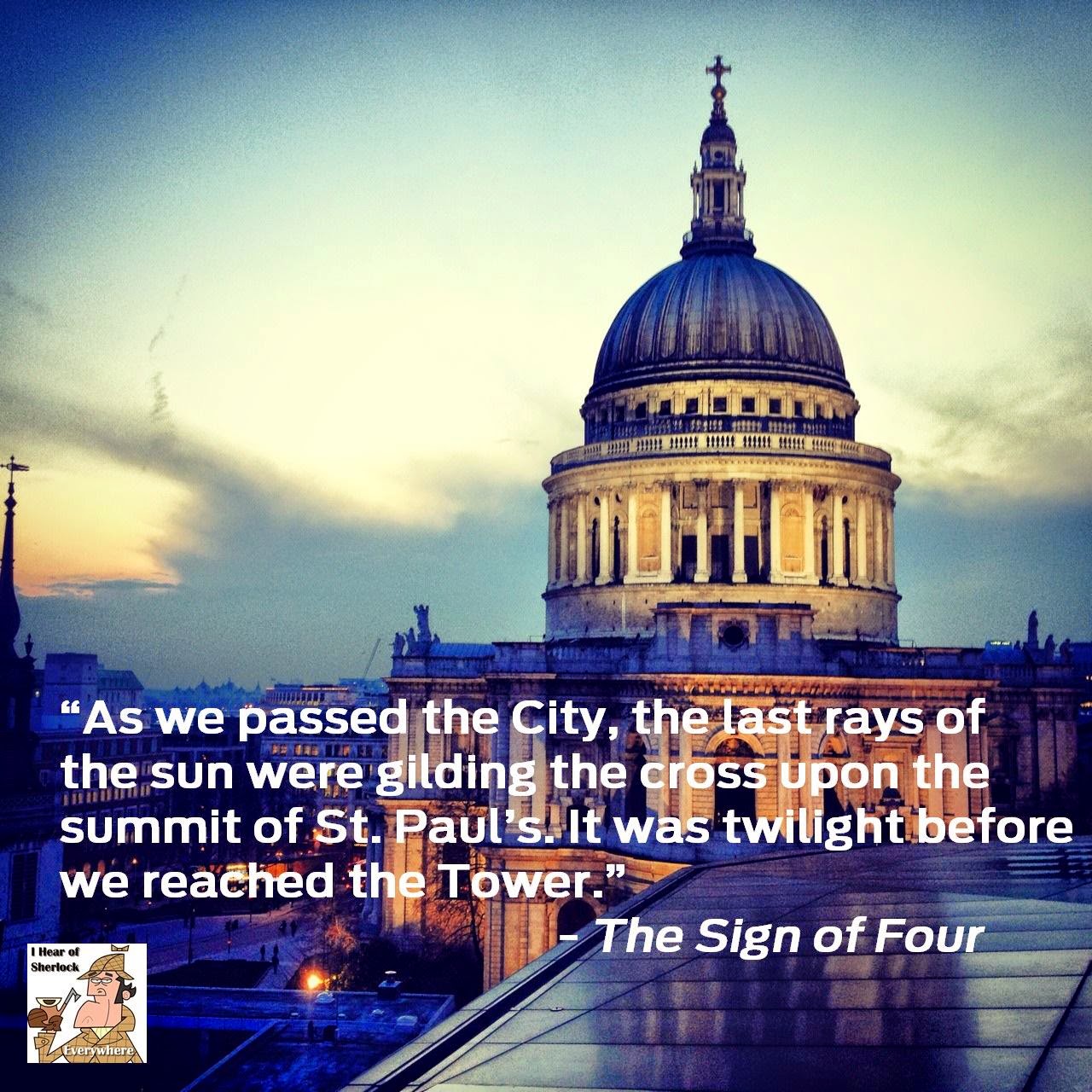 "As we passed the City, the last rays of the sun were gilding the cross upon the summit of St. Paul's. It was twilight before we reached the Tower."


Tower Bridge and the Tower of London

Aside from the Houses of Parliament, there can be no better pieces of architecture that visually symbolize Victorian London. Of course, one had its beginnings in medieval times and the other was a more modern edifice. And it was at the older of the two where Holmes suggested anchoring the police launch while waiting for the Aurora to show itself in SIGN:


"Where to?" asked Jones.
"To the Tower. Tell them to stop opposite to Jacobson's Yard."

"The City" - also known as the "Square Mile" - is technically a county that denotes where the original Roman settlement was, and where the financial district lies. A number of Canonical characters had business in the City:


The video also shows the Bank of England, and the counterfeiter James Winter (alias John Garrideb, alias Morecroft, alias Killer Evans) reminisced about the skill of his partner, "No living man could tell a Prescott from a Bank of England." [3GAR]


Fleet Street and The Strand

Beginning with the series of stories that became The Adventures of Sherlock Holmes and extending through the rest of the Canon, the Strand Magazine was the main publication that brought Sherlock Holmes to the public.

When Holmes and Watson took their after-dinner walk in "The Resident Patient," they walked through this very neighborhood. "For three hours we strolled about together, watching the ever-changing kaleidoscope of life as it ebbs and flows through Fleet Street and the Strand."

Fleet Street was the site of the Red-Headed League, as advertised in the newspaper: "Apply in person on Monday, at eleven o'clock, to Duncan Ross, at the offices of the League, 7, Pope's Court, Fleet Street." [REDH]

Watson first had rooms in the Strand [STUD] and Henry Baskerville bought his boots there - one of which went missing before mysteriously turned up again [HOUN]. And Holmes instructed Watson very specifically in "The Final Problem":


In the morning you will send for a hansom, desiring your man to take neither the first nor the second which may present itself. Into this hansom you will jump, and you will drive to the Strand end of the Lowther Arcade, handing the address to the cabman upon a slip of paper, with a request that he will not throw it away.


And Holmes and Watson met for dinner at Simpsons, where they could be found "sitting at a small table in the front window, and looking down at the rushing stream of life in the Strand." [ILLU]

Known today for the theatre and tourist attractions, the West End figures into just a handful of stories - although one of them is critical.


But perhaps one of the most significant locations in the Canon was located in the West End: the Criterion Bar (now the Criterion Restaurant) in Picadilly Circus, where Watson "was standing at the Criterion Bar, when someone tapped me on the shoulder, and turning round I recognized young Stamford," [STUD] who then led him to meet Sherlock Holmes. If you visit the Criterion today, you can see the meeting memorialized. 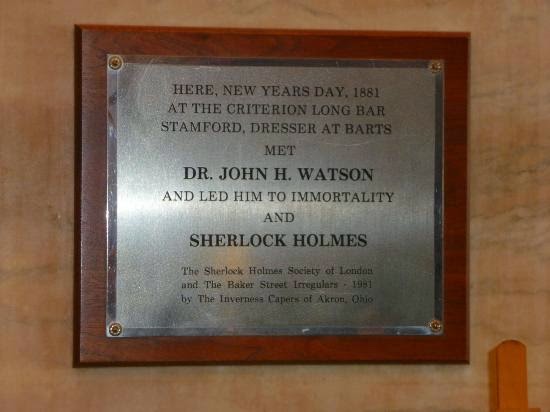 Also one of the most popular destinations today, Trafalgar Square is at the intersection of roads leading to the Strand and Whitehall, with the National Gallery on one side of the square, St. Martin-in-the-Fields on another, and the Sherlock Holmes Pub not very far way on Northumberland Street - which, incidentally used to the be the Northumberland Hotel (where Sir Henry Baskerville stayed) and later the Northumberland Arms.

The cabman that trailed Sir Henry to Baker Street told Holmes about his fare: "He hailed me at half-past nine in Trafalgar Square. He said that he was a detective, and he offered me two guineas if I would do exactly what he wanted all day and ask no questions." [HOUN]

When Holmes heard of Lestrade's wild goose chase after Hatty St. Simon, he jokingly asked, "Have you also dragged the basin of the Trafalgar Square fountain?" [NOBL]

In the video, we see the Crimean War Memorial, a monument to those British soldiers who lost their lives in supporting the Ottoman Empire against Russia. The Crimean War warranted a few mentions in the Canon:


While there is no mention of Buckingham Palace in the Canon, there is the Victoria Memorial and we do know that Holmes "spent a day at Windsor, whence he returned with a remarkably fine emerald tie-pin" which was "a present from a certain gracious lady in whose interests he had once been fortunate enough to carry out a small commission." [BRUC]

The largest park in London would seem to be a natural place for action in the Canon. However, the only reference to Hyde Park in the stories was in "The Noble Bachelor" when Lady St. Simon "was afterwards seen walking into Hyde Park in company with Flora Millar," and Lestrade later began "dragging the Serpentine" in his search for her.


It's fascinating to see the London of then and now, and to note that much of the pedestrian and vehicular traffic patterns haven't changed and that even after the Blitz, many of the historic structures remain. One thing did strike us in some of the old footage: London's legendary fog was present and even obscured some of the landscape.