The Secret of Sherlock’s Statue

"﻿For a long time he gazed upwards at it" [ABBE] 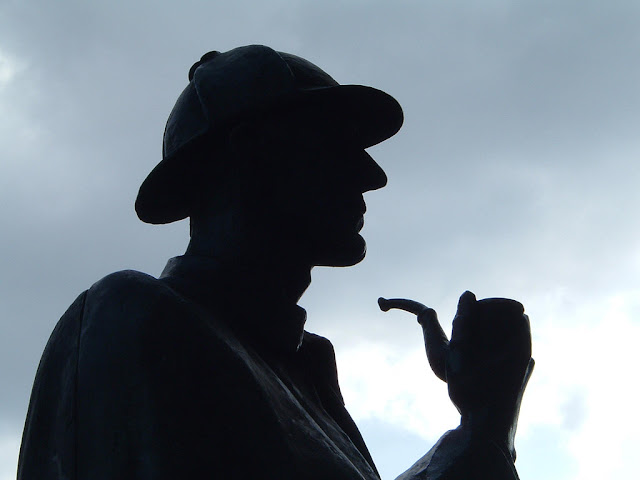 Princes Street in Edinburgh, Scotland is one of the city’s main thoroughfares. Dominating the Princes Street Garden is an imposing 200 foot tall Victorian monument to Sir Walter Scott, described by writer Bill Bryson as looking like a “Gothic rocket ship.”

But a few minutes stroll up Leith Street will take you to Picardy Place and you will see a much smaller monument – a monument commemorating the birthplace of that other well-known Scottish writer so near and dear to our hearts, Sir Arthur Conan Doyle.  Doyle was born May 22nd, 1859 at 11 Picardy Place, near the top of Leith Walk. The building where he was born is no longer there but in its place is an oversized statue of Sherlock Holmes – a statue which has a secret unknown to most Sherlockians, even those who have stood before it and admired their literary hero.


Within sight and a few hundred feet from the statue stands The Conan Doyle Pub on York Place.  A plaque on the exterior of the pub shares some history of Picardy Place as well as a snippet of misdirection about what Holmes is contemplating as he gazes downward. The plaque reads:

Located close to The Conan Doyle is Picardy Place, where the pub’s namesake, the great author Sir Arthur Conan Doyle, was born on May 22nd 1859. There have been houses on this site since 1685, when French refugees (who had fled the province of Picardy, due to the revocation of the Edict of Nantes when Louis XIV declared Protestantism illegal) built Picardy village. Today, an over life-sized bronze statue of Conan Doyle’s greatest creation, Sherlock Holmes, stands opposite his birthplace. The most famous fictional detective is portrayed in meditation on the death of his author. 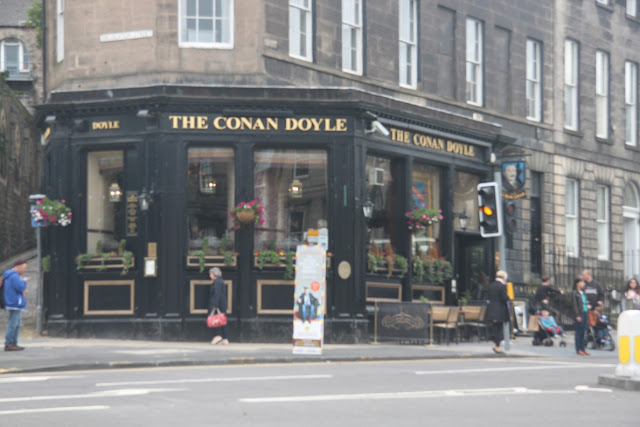 Standing directly in front of the statue and looking up, it might appear that Holmes is deep in thought, looking towards the pavement, perhaps reflecting upon being at the site of the birthplace of Doyle, perhaps musing about his own seeming immortality as well as ‘the death of his author.’

During his long career Holmes could be contemplative – we know that he carefully studied a rose and concluded that the “highest assurance of the goodness of Providence seems to me to rest in the flowers.” [NAVA] Nonetheless Sherlockians admire Holmes for his ability not just to see, but to observe, to notice a trifle, and to deduce from it a clue and thereby solve a mystery. Holmes actively looked and observed. He once told Inspector Gregory that “I only saw it because I was looking for it.” [SILV]

It was not beyond Holmes to get on his hands and knees to carefully examine something on the ground, be it a footprint or tobacco ash.  Can we apply Holmes’ methods here, at his own statue? Perhaps Holmes is not in metaphysical contemplation, staring without seeing, without observing. But at what could he be looking?

An examination of the area in front of the statue reveals only stone pavers – no engraved dancing men or coded message to be seen.  But notice that the statue is on a pedestal and raised more than six feet off the ground.  From a slightly higher elevation on Picardy Place Roundabout, one can see his feet and that the bronze casting includes a portion of the ground upon which Holmes is standing.  At this distance, however, nothing can be seen or observed.

A modern day high tech solution might be to rig a selfie stick - or even better, a remote controlled quadcopter with a digital camera - and flit around and survey what is near to Holmes’ feet. Instead we will be true to the Master and his methods and physically position ourselves to use our own eyes.  With no handy step-ladder to be found, we note that there is a ledge about 18 inches high around the base of the pedestal. Even Watson’s war wound (gimpy leg or shoulder – take your pick) would not prevent him from stepping up on the corner of this ledge to get a closer view.  Due to recent rain, my photo shows a puddle of water partially obscuring something of interest. But when you are in Edinburgh, climb upon that corner ledge and confirm for yourself that there is indeed the “footprint of a gigantic hound!” 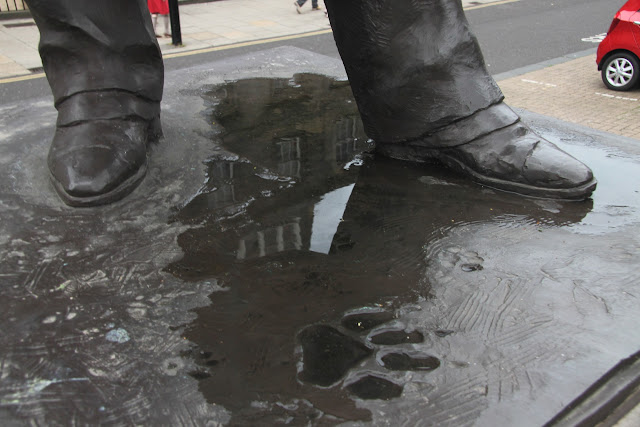 But wait – there is more!  Seen more clearly in the photo below is the pawprint of a much smaller animal – a clue outside the bounds of Canonical knowledge certainly.  Whatever could it mean? 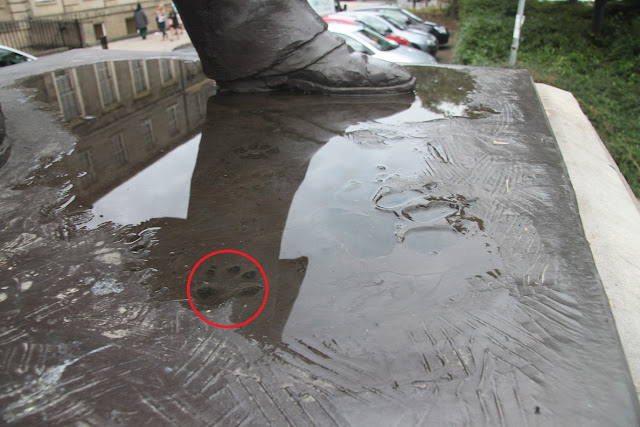 We are, after all, at the birthplace of Doyle. Did Doyle keep a pet which the sculptor wished to acknowledge? But that would be a very obscure bit of trivia to include, especially since Doyle was unlikely to even be aware of a family pet in the first year or so of his life.

If it is unrelated to Doyle’s birth, perhaps it is related to his birthplace. Picardy Place has no connection itself - but what of the city of Edinburgh, the city which approved the building of this memorial to one of its famous residents. Can we deduce a connection with Edinburgh? The paw print is not of sufficient size to be a companion print of a gigantic hound. It would have to belong to a much smaller dog.  That would most likely rule out half spaniel, half lurcher Toby from The Sign of Four. Is there a small dog strongly associated with Edinburgh, a small dog perhaps contemporaneous with Doyle?

Of course! No need to eliminate any impossible or improbable suspects, there is only one answer – Greyfriars Bobby! Known throughout Scotland, Bobby, a Skye terrier, was born about 1855 and for fourteen years guarded the grave of his owner. The statue of Bobby sits at the corner of Candlemaker’s Row and George IV Bridge, just a one mile walk from Picardy Place. A plaque on the base reads "A tribute to the affectionate fidelity of Greyfriars Bobby. In 1858, this faithful dog followed the remains of his master to Greyfriars Churchyard and lingered near the spot until his death in 1872." 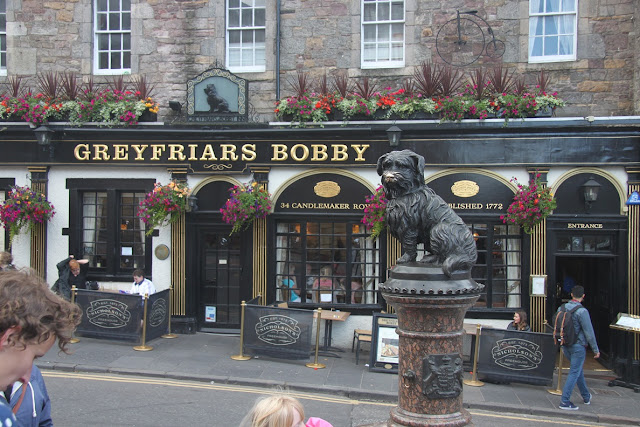 I only hope that no damage is done to the corner of the pedestal of the Holmes statue by legions of Sherlockians trying to see the two paw prints. Perhaps the city of Edinburgh would be wise to invest in a stone step or two to avoid wear on the ledge.

I am indebted to Rupert Maragh of the UK for introducing me to the ‘secret of the statue.’