Episode 77: The Speckled Band of Boston 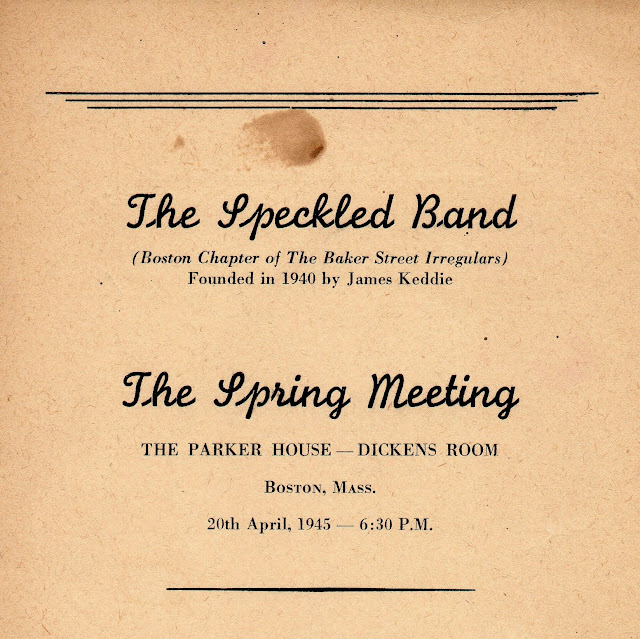 It's been exactly one month since our last episode, as is our tradition on the 15th of every month, we bring you another episode of our show. In this episode, come with us to Boston as we investigate the Speckled Band of Boston - the oldest scion society of the Baker Street Irregulars, which was founded in 1940.

In addition to a recap of some of the main Sherlock Holmes news of the last month, we bring you a number of special audio features. Burt and Scott both attended the 75th annual dinner of the Speckled Band of Boston and captured some audio of the evening, to give you a sense of what goes on at this august institution.

We ran into James O'Leary, a contributor of this site, and he presented us with copies of his entry in the John H. Watson Monograph Series, Some Observations Upon the Early Writings of John H. Watson, MD, 1887-1894. We have an extra copy to give away - please listen in to the show around the 12-minute mark to hear how you might win it. 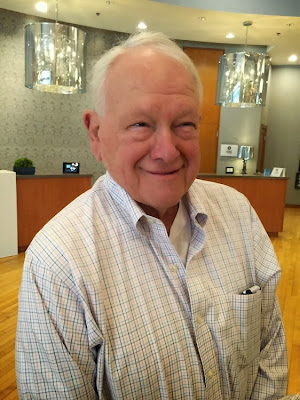 Another treasure is Dan Posnansky, BSI ("Colonel Hayter"), the current Keeper of the Speckled Band. We've known Dan for years and have heard his talks about his very impressive holdings, but we never had the chance to get him on the show. We rectified that this time, and we have a 45-minute interview with him as part of this Speckled Band spectacular.

One of the names Dan mentioned is Dirk Struik, whose signature you can see on this program from the 1945 Speckled Band dinner:

We're pleased to bring you another entry in our "Mental Exaltation" quiz program, inspired by NPR's Wait Wait, Don't Tell Me! and written by IHOSE quizmaster Nick Martorelli. Find our how you can qualify to win.

"My mind," he said, "rebels at stagnation. Give me problems, give me work, give me the most abstruse cryptogram, or the most intricate analysis, and I am in my own proper atmosphere. I can dispense then with artificial stimulants. But I abhor the dull routine of existence. I crave for mental exaltation.

We're pleased to welcome Madelyn Covey of Emeryville, CA to the show as our contestant. Madelyn, who has written "Conductor of Light," a song dedicated to John Watson, joined us for a band-themed quiz. Listen to see how she did.

We wrap up with our regular Gas-Lamp reading, this time taken from two unlikely sources: poems "The Fog Hangs Deep in Baker Street" from The Tavern Club at 75 and "Report of the Poet Laureate at the Speckled Band Dinner May 15, 1959" from The Third Cab.

Many more links, articles and images are available in our Flipboard and Scoop.it sites at ihose.co/flipsherlock and ihose.co/scoopsherlock, as well as on our accounts on Facebook, Twitter and Instagram.

This episode includes two sponsors that deserve your attention:

Wessex Press (check out the new Sherlock Holmes and Conan Doyle in the Newspapers Volume 1)
The Baker Street Journal, where you should get your annual subscription in now to secure all four issues and a very special Christmas Annual about The Seven Per-Cent Solution.

And special thanks to Elizabeth Ong, James O'Leary and Mary Miller for your generous donations. If you would like to help support I Hear of Sherlock Everywhere, you can click here or on the "Donate" button in the upper portion of the site. 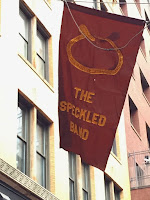