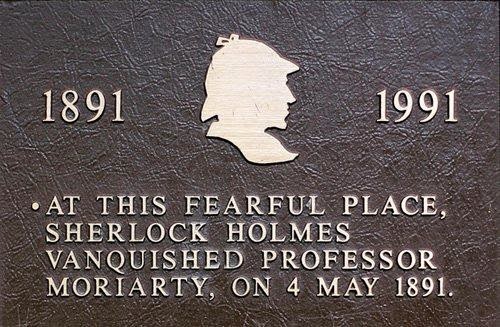 The date of May 4 typically means melancholy for anyone who has read "The Final Problem," the short story in which Sherlock Holmes confronts his archenemy Professor Moriarty (who we've inexplicably never heard of up until this point in the Canon) and both of them tumble off the cliff into the Reichenbach Falls.

As you may recall, after Holmes appeared in Watson's consulting-room and recounted his interaction with Moriarty, the two fled to the Continent, eventually landing in Switzerland:


It was upon the 3rd of May that we reached the little village of Meiringen, where we put up at the Englischer Hof, then kept by Peter Steiler the elder. Our landlord was an intelligent man, and spoke excellent English, having served for three years as waiter at the Grosvenor Hotel in London. At his advice, upon the afternoon of the 4th we set off together with the intention of crossing the hills and spending the night at the hamlet of Rosenlaui. We had strict injunctions, however, on no account to pass the falls of Reichenbach, which are about half-way up the hill, without making a small d‚tour to see them.

It was here that Conan Doyle chose the final resting place for Sherlock Holmes - a rest that was intended to be eternal but that we now know lasted nearly a decade. The description of the Reichenbach Falls is a fitting one for the epic struggle of good versus evil that took place later in the story:


It is, indeed, a fearful place. The torrent, swollen by the melting snow, plunges into a tremendous abyss, from which the spray rolls up like the smoke from a burning house. The shaft into which the river hurls itself is an immense chasm, lined by glistening, coal-black rock, and narrowing into a creaming, boiling pit of incalculable depth, which brims over and shoots the stream onward over its jagged lip. The long sweep of green water roaring for ever down, and the thick flickering curtain of spray hissing for ever upwards, turn a man giddy with their constant whirl and clamour. We stood near the edge peering down at the gleam of the breaking water far below us against the black rocks, and listening to the half-human shout which came booming up with the spray out of the abyss.


And after Watson was lured back to the Englischer Hof with the story of a patient in need (good old Watson!), he returned to the falls to find a note from Sherlock Holmes along with his alpenstock and silver cigarette case. He was led to conclude that that inevitable happened:


An examination by experts leaves little doubt that a personal contest between the two men ended, as it could hardly fail to end in such a situation, in their reeling over, locked in each other's arms. Any attempt at recovering the bodies was absolutely hopeless, and there, deep down in that dreadful cauldron of swirling water and seething foam, will lie for all time the most dangerous criminal and the foremost champion of the law of their generation. 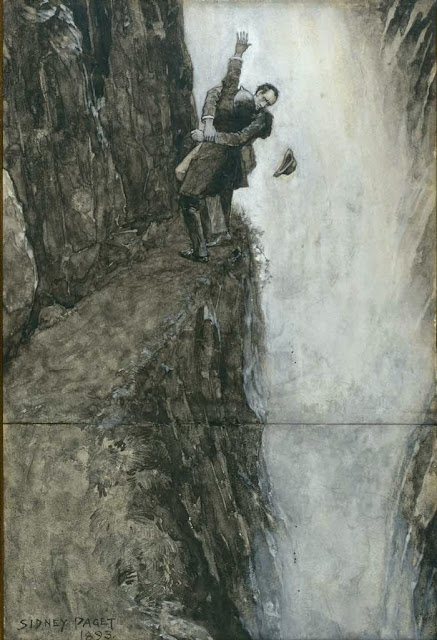 But aside from the colorful descriptions of both the setting and the action, this story above many others shows Watson's emotional side. Over the course of two short years, readers had gotten to know Holmes and Watson through 12 stories that made up The Adventures of Sherlock Holmes and 11 stories that comprised The Memoirs of Sherlock Holmes (as well as the previously published A Study in Scarlet and The Sign of Four). That's less than half of what would eventually become the entire Canon of 60 stories - stories that would be published over the course of the following 35 or so years.

For Watson as well as for the readers, that's an intense run of stories - tales which fill us with wonder as we've been learning about the habits, eccentricities, limits and capabilities of the most intriguing detective that the world has ever known. Is it any wonder then that his sudden and tragic loss affected us so deeply? 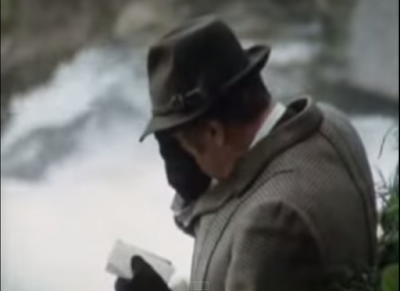 Watson opens the story with the fateful line, "It is with a heavy heart that I take up my pen to write these the last words in which I shall ever record the singular gifts by which my friend Mr. Sherlock Holmes was distinguished." We'll never forget reading that line for the first time and feeling a little stab in the gut. The modern equivalent would be exclaiming, "Wait, what?"

He went on to describe how the scene affected him: "It was the sight of that alpenstock which turned me cold and sick...I stood for a minute or two to collect myself, for I was dazed with the horror of the thing."

Even Holmes understood how his untimely departure would affect his friend, writing in his farewell note, "I fear that it is at a cost which will give pain to my friends, and especially, my dear Watson, to you."

The pain was palpable to readers at the time. There is an apocryphal legend that grown men in London wore black armbands in a demonstration of mourning. We have yet to see any definitive evidence of this occurrence (and the Baker Street Journal once offered a bounty for anyone who could prove it). But it rings true to the spirit of what happened at the time, which was an outpouring of grief over the loss of a literary character. Letters flowed to The Strand Magazine and to Arthur Conan Doyle himself, one even beginning "You brute!"

At least modern readers don't have to wait eight years for Holmes to reappear in The Hound of the Baskervilles or ten years for the first of the stories that would make up The Return of Sherlock Holmes. Can you imagine what it must have been like to have to put Holmes to rest in one's mind and to blindly wait to see if he would ever reappear?

We're fortunate that the public outcry (and, let's face it, a hefty payday) convinced Sir Arthur to take up his pen once more to provide us with such rich and wonderful stories to fill our desires, fuel our imagination and enrich our friendships. While May 4 may seem one for us to mourn, we're fortunate that, as Watson observed upon Holmes's return in "The Empty House,"


...once again Mr. Sherlock Holmes is free to devote his life to examining those interesting little problems which the complex life of London so plentifully presents.