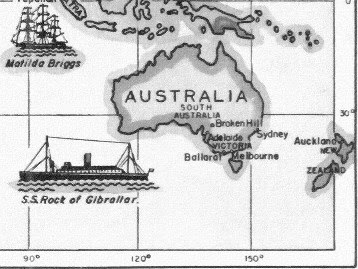 To our friends Down Under, we wish you a happy Australia Day. January 26 is traditionally the day that Australia celebrates its national heritage - the people, the land, the indigenous culture and the diversity that makes up this very unique country. With over 5,000 events scheduled across the continent, it is the largest celebration of Australia's existence.

As you may know, Conan Doyle was a world traveler, and one of his journeys took him to the former penal colony. Even before making what must have been an excruciatingly long trip, he managed to to put a number of connections to the island continent in the Canon. Here are the ones that come to mind:
While these are the only overt references to Australia that I can remember off the top of my head, there are other entries that might imply a connection with the land down under:
It's a lovely country with fascinating people - a unique mix of American, British and Pan-Asian cultures over a wide variety of landscapes. When I traveled there in 1997, I was treated like royalty by the Sydney Passengers. If you ever have the chance to visit this great country, by all means, go.

Yes, it was a great day. Lots of good-natured celebration. For anybody travelling here, please let us know and we'll put you in touch with the nearest Sherlockian group.