"I am ready to give you any information which may assist you in forming an opinion." [NOBL] 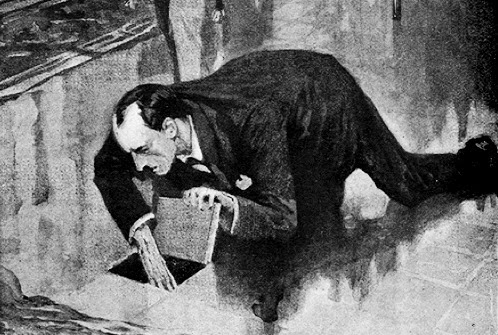 Another Sherlock Holmes trademark fight is brewing, the opening of the International Exhibition of Sherlock Holmes, Holmes' clients analyzed by type, gender and status, a one of a kind Sherlock + Batman piece is acquired, Lyndsay Faye celebrates the release of her latest novel, the Baker Street Babes enter NC-17 territory, the Conan Doyle Estate, Ltd replies in court to Klinger's lawsuit, the newest scion society of the Baker Street Irregulars can be found in a surprising place, and more in the Weekly Sherlock Links Compendium by Matt Laffey.


The Daily Mail led off with a headline that has probably caused the total mental collapse of hundreds of BBC Sherlock fans, leaving thousands more contemplating what it would take to hire an airgun toting hitman: “U.S. threat to kill off BBC’s Sherlock: Hungarian-born socialite threatens legal action claiming she owns Arthur Conan Doyle character" - say what?! As apocalyptically insane this headline sounds, there’s probably really nothing to worry about. Longtime Sherlockians are probably familiar with the Andrea Plunket saga and her various claims to copyright of the Sherlock Holmes characters/stories based on having once been married to TV producer Sheldon Reynolds - who created the Ronald Howard Sherlock Holmes (1954-1955) series as well as a quasi-remake Sherlock Holmes & Doctor Watson (1979-1980) with Geoffrey Whitehead as Holmes - from which she supposedly acquired the copyright in a 1990’s divorce settlement. See one of those episodes here

If this is your first time hearing about Plunket’s claims on the Sherlock Holmes properties (in one form or another) and want to learn more, you are in for a transcontinental soap operatic treat that involves attempted murder, squandered fortunes, a Swiss tax haven, a Georgian ‘princess’ and a bed & breakfast in upstate NY. A 2010 article in the NYT “For the Heirs to Holmes, a Tangled Web" did a good job summarizing the history of ACD’s literary properties, mentioning all the major players since 1930. Next check out "The Case of Andrea Plunket and the Sherlock Holmes Copyrights" for a closer look at Ms Plunket and then see Chris Redmond's “Notes on the Ownership of the Sherlock Holmes Stories" for a variety of relevant links. Note of clarification: Andrea Plunket’s company The Arthur Conan Doyle Literary Estate is not the same entity as the Conan Doyle Estate Ltd., the company currently involved in Klinger v Conan Doyle Estate (cf. Free Sherlock!). Read the Conan Doyle Estate’s view on Plunket here. On a final note, you can find Ms Plunket on Facebook.

The International Exhibition of Sherlock Holmes is a “unique and interactive experience showcases areas of forensic science that enabled Sherlock Holmes to solve crimes, as well as the historic underpinnings of author Sir Arthur Conan Doyle’s rich and vibrant stories” opens at the Oregon Museum of Science and Industry (OMSI) this October 2013. Exhibits include Dr. Conan Doyle’s Study, the Science & History behind Sherlock Holmes’s methods, a recreation of Sherlock Holmes’ sitting room at 221B Baker Street and an exhibit dedicated to Sherlockiana and Culture in all it’s manifestations. For the latest news and updates regarding what is sure to be one of the greatest popular Sherlock Holmes events in decades make sure to follow @SherlockExhibit on Twitter and The International Exhibition of Sherlock Holmes on Facebook. Speaking of news, on September 18th their Facebook and Twitter excitedly announced “The first artifact crate from the UK arrived at the Oregon Museum of Science and Industry (OMSI) today!”

The Norwood Builder put together a post that is a stunning example of why being a Sherlockian is one off greatest intellectual ‘lifestyle choices’ one can make. In “Sherlock Holmes’ clients - Or: The demography of Canon" readers are treated to an amazing undertaking where we find the Norwood Builder "trying to get a bird’s eye view of Sherlock Holmes’ canonical clients, with a particular regard to their demographic representativeness - or lack of it." When a prospective client marches down Baker Street, zeros in on ‘221B’, gains admittance from Mrs Hudson (or a boy in buttons) and ascends the seventeen steps leading to the sitting room of Mr Sherlock Holmes, it’s important to remember that said client does not simply materialize out of thin-air but possesses a rich biography. As (fanatical) readers of the Canon, we have a strong sense that these biographies are varied and drawn from all strata of society: for every Wilhelm Gottsreich Sigismond von Ormstein there is a Shinwell ‘Porky’ Johnson; with every missing Lady Frances Carfax there is a Mrs Amberley whose fate for better or worse must be discovered; for each wrongly accused Thaddeus Sholto there is a John Horner or even a Flora Millar whose name must be cleared. But does the assumption that Holmes’ clients came from all walks of life hold true? To answer this question, Holmes’ Canonical clients are broken down by Type, Gender and Status and the results will surprise you! The Norwood Builder’s blog is no stranger to the application of statistical analysis to elements in the Canon: click here to see all his posts tagged with “statistics.”


I Hear of Sherlock Everywhere reports on Mr Jerry Margolin’s, BSI (“Hilton Cubitt”) latest Sherlockian objets d’art acquisition, the original artwork for a piece titled Sherlock Joker, the Crown Prince of Crime Detection (insert combination of the Joker’s infamous “Hahahah…” maniacal laughter with Holmes’ measured comments on Early English Charters) which was the original art used for one of two cards depicting Batman’s arch nemesis the Joker in the guise of the Great Detective for Batman Master Series, a 1996 card set released by Fleer. Where as Margolin’s piece depicts a somewhat calm Joker hamming it up in deerstalker and calabash but revealing a glimpse of his true insanity via the magnifying glass, the second Sherlock Joker image shows Arkham Asylum's number one resident patient at the apex of total madness revealed by the now shattered magnifying glass. There is a long history of Sherlock Holmes appearing alongside Gotham’s Caped Crusader, but the most recognizable is from the cover of the 50th anniversary of Detective Comics, Issue #572 (March 1987), where we see Batman and Holmes paging through the 1937 Detective Comics issue where ‘The Batman’ first appeared. One of the stories contains an amusing panel sequence where we see Batman and Sherlock Holmes (at 135!) discussing his secret to good health: ”A proper diet, a certain distillation of royal jelly developed in my beekeeping days, and the rarified atmosphere of Tibet, where I keep my primary residence…” Batman then attempts to light Holmes’ pipe only to be told “Thank you, for I’m afraid the pipe is purely for show these days.”

Lyndsay Faye, as announced last week, appeared at The Mysterious Bookshop in NYC for the launch of her latest novel, the sequel to the excellent The Gods of Gotham, Seven For a Secret - and it was a ‘Wilde time.’ Not surprisingly there was a strong Sherlockian presence on hand to support Ms Faye as she discussed the world of Timothy and Val Wilde as well as the time period in which they lived. Most interestingly was her discussion of the various reactions she’s received regarding the moral outlook and attitudes of the characters, in particular the criticism (by some) that Timothy Wilde’s views on blacks, gays and religion are overly ‘modern’. For further proof that Ms Faye’s literary star is rising, read her interview in last Sunday’s LA Review of Books “Sherlockian Girl Goes Wilde" (Ha! Get it?)


The Baker Street Babes, in their first NC-17-rated podcast, released Episode 44: “Sherlock Holmes After Dark Pt I” wherein “Babes Curly, Liz, & Lyndsay talk dirty with Les Klinger, Sketchlock, reapersun, and Madlori in this first of two episodes about doing the dirty in Sherlockiana. This is the first of a two parter episode. In the first part we cover Victorian Pornography, how Les started collecting Sherlockian porn, his recommendations, and then why women like slash.” My guess is that Part II will be an hour long analysis/discussion of the Granada scene from “The Master Blackmailer” wherein Jeremy Brett is filmed canoodling with Agatha, Milverton’s housemaid, in what has to be the single most awkward (sexual) moment in the history of Sherlockian anything in any medium ever.

The Babes of course aren’t the first Sherlockians to delve into the sexual underpinnings of the Canon. Mr Chris Redmond wrote a book titled In Bed With Sherlock Holmes: Sexual Elements in Arthur Conan Doyle’s Stories of the Great Detective which not only analyses sexual elements in the Canon, but also looks at the non-Sherlockian fiction, letters, essays and speeches of ACD as well as aspects from his personal life. Finally, for a good time, check out I Hear of Sherlock Everywhere's “Top 10 Most Suggestive Lines from the Sherlock Holmes Stories.” For example, #8: “I remember nothing until I found myself lying on my bed trembling all over. Then I thought of you, Mr. Holmes.” [COPP]

The Hollywood Reporter in “Conan Doyle Estate: Denying Sherlock Holmes Copyright Gives Him ‘Multiple Personalities’” reports on the latest development in the Klinger vs Conan Doyle Estate lawsuit. In response to Klinger’s lawsuit arguing that the major story elements of the Sherlock Holmes stories are fair game, ie. the free use of Canonical characters such as Sherlock Holmes and Doctor Watson, irregardless of the fact that a few of the final stories have yet to enter the public domain. “The Doyle estate makes the case for a special breed of “complex literary characters” (unlike alleged “flat” television ones like Amos ‘n’ Andy) who develop their personalities, not always as expected, presumably making them more real. The defendant says, “Sherlock Holmes is such character, having all of the complex background and maturing emotions, thoughts, relationships and actions that characterize human development over time.”” Put simply, the Estate makes the claim that Sherlock Holmes is the sum of all sixty stories and since not all sixty stories are in the public domain, Sherlock Holmes can’t be freely used since ‘part of him’ is still protected. An interesting argument for sure, but will it stand up in a court of law? On a related note, read Alistair Duncan's views on the Free Sherlock case here.


Friends of the Soldier Named Murray a Sherlock Holmes Society based out of The Terrance on Mountain Creek, an assisted living facility in Chattanooga, TN., was recently made an Official Scion of the Baker Street Irregulars. Consisting of about 16-18 “active members attending each meeting…the study group meets monthly and discusses a different Sherlock Holmes short story….Any person who is a resident in an Assisted Living Facility and would like to form a Sherlock Holmes Society may contact the “Friends of the Soldier Named Murray” by email request to Jody Baker for tips, forms and other organizational assistance.” Sherlockians truly are everywhere!


Sidgwicks uncovered another wonderful illustration from a non-English source, this time in an Italian translation of The Sign of Four by Ugo Mataniafor “Il segno dei quattro”, Il Romanzo Per Tutti (Vol. 4, No. 5), 1948. Earlier this month, Sidgwicks posted a scan from a German edition of The Hound of the Baskervilles: Richard Gutschmidt for Der Hund von Baskerville, Stuttgart: Robert Lutz, 1907. I’ve seen a few illustrations from German and Italian translations over the years and they’ve all been rather stunning. Perhaps one day someone will publish a collection of non-English edition illustrations of the Canon.


When you make purchases from the links we share, it provides us with a stream of revenue to help keep this site running. Thank you for your generosity.