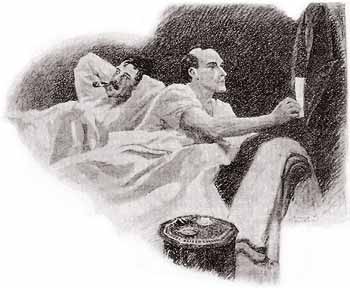 A number of years ago, we published a small pamphlet called "Sherlockian Sillies." We recently unearthed it and had a good chuckle. And the recent airing of The Baker Street Babes' Sherlock After Dark Part I podcast episode, as well as Sherlock Peoria's assessment of the same got us to thinking.

So we decided to resurrect this favorite. Each and every one of these quotes is pulled directly from the original text of the Canon.

Which is (or are) your favorite? And perhaps you have some additional suggestive lines from the stories that we missed. Drop us a note and let us know so we can expand our little list.

The game continues to be afoot with this entry: "More Suggestive Phrases from the Sherlock Holmes Stories."

*If you're wondering about the four-letter abbreviations after each quote, the key is here.
--