" it was difficult to name a subject or a person on which he could not at once furnish information."  [SCAN] 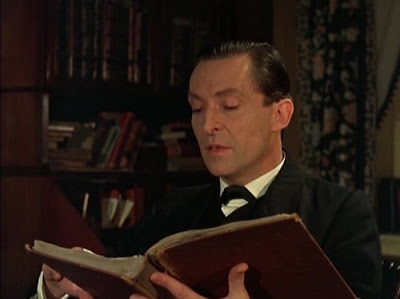 The arrival of the Autumn 2013 issue of the Baker Street Journal, Lyndsay Faye's Seven For a Secret launch party, a new Moriarty comic series, Brad Keefauver on 'kids these days,' an update on Klinger vs. Conan Doyle Estate Ltd., Alistair Duncan on collecting Sherlockiana, a database of books appearing in the BBC's Sherlock, a new adaptation of Gillette's Sherlock Holmes play and more in this week's Friday Sherlock Links Compendium by Matt Laffey.

Don Libey, Co-Director of the recently formed John H Watson Society, released The Biography & Autobiography of Sherlock Holmes: Being a two book, one volume edition of 'My Brother, Sherloc' by Mycroft Holmes and 'Montague Notations' by Sherlock Holmes (Campbell & Lewis, 2013), two fascinating though highly speculative accounts of the 'real' life of Sherlock Holmes. For starters, imagine if Holmes never actually lived on Baker Street but instead lived and worked out of Montague Street - and that's just the start. Even if you're not a fan of pastiches, Mr Libey's approach is scholarly and drenched in the Canon and should appeal to those with purist tendencies as well as pastiche lovers alike.

Dan Andriacco inspired by the recent flurry of discussion surrounding the news that Sir Ian McKellen has been cast in the role of the Great Detective for the film adaptation of Mitch Cullen's A Slight Trick of the Mind (2005), a pastiche that apparently many Sherlockians - including myself - are unfamiliar, recommends another book where we find Holmes in the Winter of his Life: Michael Chabon's excellent The Final Solution: A Story of Detection (2005): "To me this little book (131 pages) is a gem. It's about a nine-year-old boy, German and mute, and an 89-year-year-old beekeeper referred to only as "the old man." The boy is a refugee from Nazi Germany. He doesn't talk, but his bird does." Pulitzer Prize winner Michael Chabon is one of my favorite contemporary authors, having written Wonder Boys (which was made into an excellent film featuring Michael Douglas, Tobey Maguire, Katie Holmes and, playing amorous book editor Terry Crabtree, one Robert Downey Jr!), The Yiddish Policeman's Ball, and his epic love letter to the Golden Age of comic books, the brilliantly entertaining The Amazing Adventures of Kavalier & Clay (2000).
The Consulting Detective explains why The Sign of Four is a masterpiece: "Of all of Doyle's novels, this one if perhaps the most original. The fact that it manages to cross a number of genre lines is excellent, making it perhaps the most entertaining of the four original Sherlock Holmes novels...[as well as] the most historically important Sherlock Holmes stories. For the first time in print, Sherlock Holmes is portrayed taking drugs..." It's refreshing to read a blog post that's strictly about the Canon, in this case the virtues of the second Holmes novel from an historic, aesthetic and cultural perspective.
CB Productions  Sherlock Holmes: The Final Adventure adapted by Steven Dietz, based on the original 1899 play by William Gillette and Sir Arthur Conan Doyle November 1-10, 2013: "The King of Bohemia is about to be blackmailed by a notorious photograph, and the woman at the heart of this crime is the famous opera singer, Irene Adler. With his trusted companion, Doctor Watson, at his side, Sherlock Holmes pursues first the case, and then the affections of Miss Adler - and in doing so, marches right into the lair of his longtime adversary, that malevolent genius of crime: Professor Moriarty." If you're in the St Paul/Minneapolis area, this sounds like a promising Sherlockian night at the theater.
Tea at 221B in "Canon Sherlock Holmes Comic Books" looks at a unique series of Canonically-inspired comics Cases of Sherlock Holmes created by Dan Day [something we've covered in these parts before - Ed.]: "The original run of fifteen was published bi-monthly in 1988 by Renegade Press. The remaining five issues were published by Northstar." Even if comics aren't your thing, these releases are about as good as it's going to get in terms of Canon-to-illustration reading. I own most of the Cases of Sherlock Holmes issues and compared to the majority of Holmes-inspired comics that have been released over the last 50 years, these are actually worth owning, or at least perusing, and some of the cover art is quality enough to out in a frame and hang on your wall. Check out the rest of the images posted by Tea at 221B and if you have a hankering to acquire a few issues of your own, eBay appears to have most of them for reasonable prices ranging from $3 to $10 an issue.
Sherlockian Scion Links:

John H Watson Society recently added a section to their website titled "The Doctor's Bookshelf" consisting of reviews of books written by JHWS members. Volumes reviewed so far include: the sixth issue of Sherlock Holmes Mystery Magazine, two books by Kieran McMullen ("Raleigh") The Many Watsons and the three-in-one hardcover from MX Holmes & Watson: The War Years, Jon Lellenberg's ("Towser") exquisitely edited (and designed) ACD diary Dangerous Work: Diary of an Arctic Adventure, Sherlock Holmes Society of London's Nicholas Utechin ("Rex") Amazing & Extraordinary Facts: Sherlock Holmes, the Wessex Press published pastiche by Ann Margaret Lewis ("Cameo") Murder in the Vatican: The  Church Mysteries of Sherlock Holmes, Roger Johnson and Jean Upton's The Sherlock Holmes Miscellany, "Dutch" aka Mr Dan Andiacco's The Disappearance of Mr James Phillimore. As a certain old bookseller once remarked to a distracted doctor: "With five volumes you could just fill that gap on that second shelf. It looks untidy, does it not, sir?" (EMPT)
* To find a Sherlockian event in your area, check out The Sherlockian Calendar - maintained by Ron Fish with Sue and Ben Vizoskie of The Three Garridebs of Westchester Country, NY. If you are interested in posting an event to the calendar, please email the details to webmaster Ron Fish at RonF404 [at] aol.com.

** If you’d like to see your event mentioned here on Always1895, please email me the name of your group/event, the details, contact info & web address  Twitter, Facebook, etc. and any other info that should accompany the above.
9/14/2013 11:54:00 AM
always 1895, blog, links, Matt Laffey, News, recurring feature, scuttlebutt