"But you had retired, Holmes. We heard of you as living the life of a hermit among your bees and your books in a small farm upon the South Downs." [LAST]

News just broke this morning on Deadline (and quickly got picked up on RadioTimes, Huffington Post, Buzzfeed and others) that Ian McKellen is being tapped by director Bill Condon to play Sherlock Holmes in a film based on Mitch Cullen's book A Slight Trick of the Mind.

For those not familiar with the premise of the book, here is the summary from Amazon:

It is 1947, and the long-retired Sherlock Holmes, now 93, lives in a remote Sussex farmhouse with his housekeeper and her young son. He tends to his bees, writes in his journal, and grapples with the diminishing powers of his mind. But in the twilight of his life, as people continue to look to him for answers, Holmes revisits a case that may provide him with answers of his own to questions he didn’t even know he was asking–about life, about love, and about the limits of the mind’s ability to know.

Sir Ian McKellen is an award-winning actor and a favorite, particularly of those who are fans of the Lord of the Rings movies, for his portrayal of Gandalf. In one of those six degrees of Sherlock Holmes twists, Benedict Cumberbatch's Watson, Martin Freeman, recently played Frodo in The Hobbit.

This should be an interesting angle, as the recent outings of Sherlock Holmes have been ultra-modern ("Sherlock"), alternate geographies ("Elementary"), or action-based (Sherlock Holmes: A Game of Shadows). It's not often that pastiches are filmed, but if done well, can account for a cross-audience draw. That's certainly likely to be the case with Tolkien fans out there.

And the good news is that McKellen already seems pretty handy with the pipe. 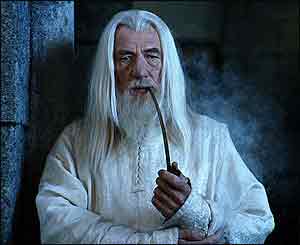