Sherlock Joker is the Crown Prince of Crime Detection

We can always count on Jerry Margolin, BSI ("Hilton Cubitt") to find something unique in the world of Sherlock Holmes artwork. As readers of this site know, Jerry joined us for Episode 16 of I Hear of Sherlock Everywhere, taking us on a fantastic journey of his Sherlock Holmes collecting interests.

While Jerry sold a good part of his book collection to Otto Penzler, he retained his Sherlockian artwork and has continued to add to it. Which is why we were curious when we saw Jerry change his Facebook profile photo to this: 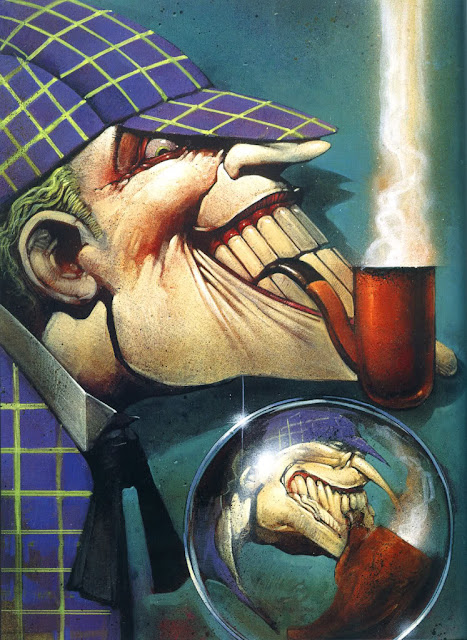 We wrote to Jerry and asked him about it, because it's quite different from the usual Joker artwork we've seen when Sherlock Holmes makes an appearance in DC Comics. Jerry told his story:


A friend was using the other card image for his Facebook profile picture and when I saw it, I wrote to him to see if he was the artist and if he had the original. He said he was not, but told me the artist's name. I looked him up and contacted him via email. He said that he had just the one piece left, but was keeping it for himself. I told him about my collection and sent photos of some of the art I owned. After he saw that he said he would not mind parting with it, but that it would be expensive. I said quote me a price and we agreed. I had it framed with Joker colors of purple and green.

We were curious about "the other card" that Jerry referenced. Not quite sure what kind of card it was, nor of the other image, we did a little research of our own and came up with the only story about this on the Internet, as shared on Livejournal regarding an all-villain series with a mystery attached:

In 1996, trading card company Fleer decided that they wanted to release a different kind of card set for Batman. Inspired by the loose narrative of Topps' classic Mars Attacks! cards, the Batman Master Series set was the first series of cards to comprise a complete, original Batman storyline. The more cards you collect, the more parts of the story you'd have to piece together. And it was all written by none other than our old favorite, Doug Moench. 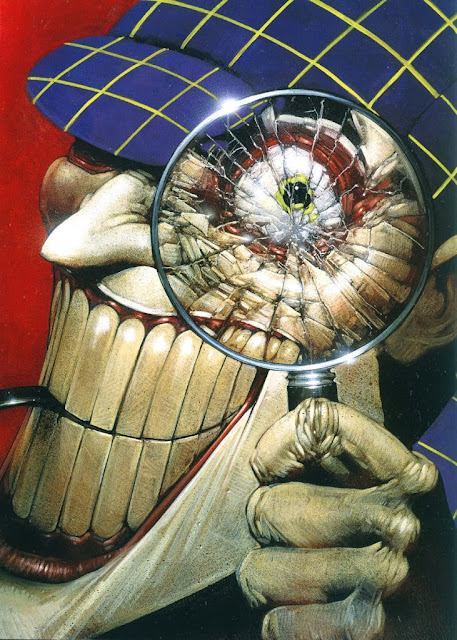 British fantasy and science fiction artist Carl Critchlow created Sherlock Joker Strikes Out, consisting of these two images in 1996 for the Fleer set. Washington Times critic James Szadkowski mentioned Critchlow's "commitment to presenting the Joker in an expressionist style," which is quite apparent in these paintings.

In Critchlow's own words, this is how he approached the concept of "Sherlock Jokes":

One this one I did exactly what was asked of me. I just put the extra image in there to make it look like a magnifying glass, just to try and show that it was working, and then make it a bit more interesting. Get a bit of something going on.

In our opinion, it worked. And here's how Jerry's framed version looks: 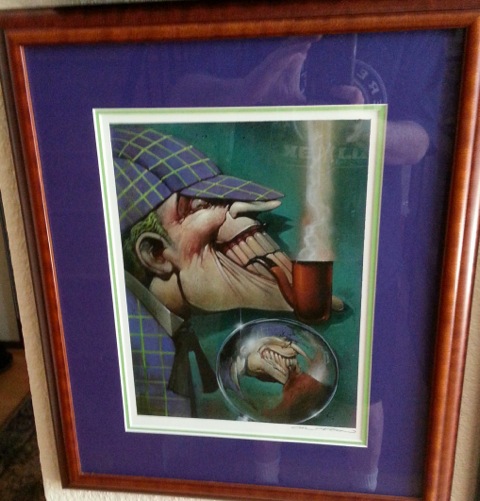 Do you have any Sherlockian artwork that is a favorite of yours? Perhaps you'd like to share it with the world. Why not share it to the Sherlock Holmes Community?