What Could Sherlock Holmes Tell About You Today?

Sherlock Holmes knew how to tell a weaver by his tooth and a compositor by his left thumb. But what clues do we leave behind in today's connected society and what can the experts make of them? 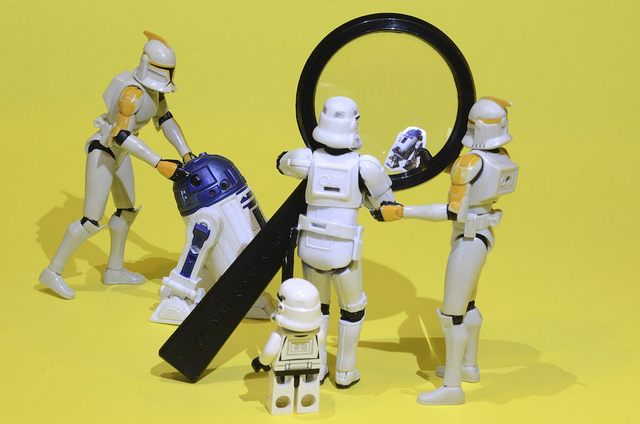 Sherlock Holmes was a master of inferring professions, national origins, recent undertakings and more from a quick glance at those he observed. Given some of the archaic professions and possessions that were represented in some of the stories and in Holmes's own words, it would be surprising to see anything like that happening today.

Recall that Watson said to Holmes: "I have heard you say that it is difficult for a man to have any object in daily use without leaving the impress of his individuality upon it in such a way that a trained observer might read it." [SIGN]

Holmes let Watson in on some of his techniques in "A Case of Identity," upon observing Miss Mary Sutherland: "I can never bring you to realize the importance of sleeves, the suggestiveness of thumbnails, or the great issues that may hang from a bootlace." He went on to describe the elements of Miss Sutherland's attire and appearance that helped him deduce her profession as a typist.

However, Holmes was also able to discern between a typist and a pianist in "The Copper Beeches":


"I nearly fell into the error of supposing that you were typewriting. Of course, it is obvious that it is music. You observe the spatulate finger-end, Watson, which is common to both professions? There is a spirituality about the face, however" - he gently turned it towards the light - "which the typewriter does not generate. This lady is a musician."

However, it was clear in that very same story that Holmes was already bemoaning the lack of appreciation for his talent and general ignorance of the people in such matters:


"What do the public, the great unobservant public, who could hardly tell a weaver by his tooth or a compositor by his left thumb, care about the finer shades of analysis and deduction!"

We know that Conan Doyle was first struck by the importance of observation and deduction by his medical school professor, Dr. Joseph Bell. The physician not only gave demonstrations to his students, but also waxed poetic on the importance of visual cues, particularly physical ones:


"Nearly every handicraft writes its sign-manual on the hands. The scars of the miner differ from those of the quarryman. The carpenter’s callosities are not those of the mason. The soldier and sailor are different in gait."


Given than so many of us are "knowledge workers" who sit in front of a variety of keyboards and screens today, one has to wonder about the importance of observation and how it plays into crime today. For example, are spatulate fingers even discernible for the astute observer in the present day?

So imagine our surprise when we saw an article about Facebook - Facebook, no less! - regarding how the social network is using its cache of data to help ferret out fraud. Credit bureaus and payment companies are looking for evidence that customers are lying about their finances, and through the observation and collation of their public updates (will criminals ever learn?) - from photos of vacations and cars, to check-ins at exotic locations, to information they share about online purchases - they're able to discern who is being less than honest about his situation.

The paragraph that caught our attention from a Sherlockian perspective was this one:


Even grammar can indicate something about users, he said, recalling a friend request he received on Facebook from someone who tried to pass himself off as a young American, yet used language that suggested “it’s someone who’s definitely around eastern Europe or Russia,” he said. “There are certainly algorithms you can build around that.”

Does this remind you of anything remotely Canonical? It should.

Think back to Holmes and Watson reading over the letter from the mysterious and pseudonymous Count von Kramm in "A Scandal in Bohemia":


"The man who wrote the note is a German. Do you note the peculiar construction of the sentence - 'This account of you we have from all quarters received.' A Frenchman or Russian could not have written that. It is the German who is so uncourteous to his verbs. It only remains, therefore, to discover what is wanted by this German who writes upon Bohemian paper, and prefers wearing a mask to showing his face.

While the observations of Holmes and Bell were centered around attributes of the physical - scars, tattoos, stains, mud splashes, sleeves, accents and the like - a variety of deductions of the present day are tied to data that are able to be attained through both simple and complex algorithmic searches. But as Holmes himself said, "Data! data! data! I can't make bricks without clay."