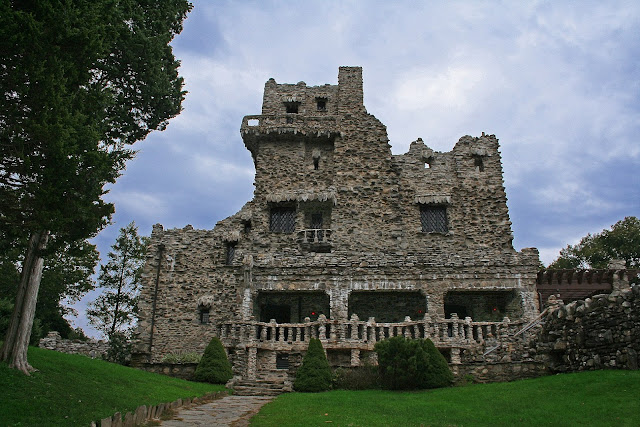 The park and its manor house are both named for the original owner of the estate, actor and playwright William Gillette. Gillette gained worldwide fame as a portrayer of Sherlock Holmes in his own play by the same name—a play for which he sought Arthur Conan Doyle's permission to take liberties with great detective, as quoted in Vincent Starrett's The Private Life of Sherlock Holmes:


"May I marry Holmes?" Gillette inquired.

Doyle replied with resigned detachment, "You may marry him, or murder him, or do what you like with him."


Gillette Castle is as unique as the man himself. Gillette put in secret doors, special hard-carved locking mechanisms, and surrounded the property with a special narrow-gauge railroad. In recent years, Baker Street Irregulars Tyke ("The Man on the Tor") and Teddie ("Carina") Niver have become William and Helen Gillette, and have welcomed visitors to the Castle. You can find their story on Episode 126.

A correspondent has informed us that things at the Castle are not quite so rosy any more. In fact, "things are fairly dire up at the Castle. The old stone heap needs repairs and a person to replace Phil Yuris who did his best to keep it from falling down these last years."

Our correspondent also reminds us:
"It’s 100 years old now, and the Friends [of Gillette Castle] want to give a birthday party for it, Roaring Twenties style, but they need some sponsors."

"The State of Connecticut doesn’t seem to be exhibiting any great pride in one of its chief theatrical landmarks, as far as chipping in to keep it standing up..."

Gillette's last will and testament was clear about his fears of the estate being mismanaged:


"I would consider it more than unfortunate for me – should I find myself doomed, after death, to a continued consciousness of the behavior of mankind on this planet – to discover that the stone walls and towers and fireplaces of my home… my railway line with its bridges, trestles, and tunnels… my locomotives and cars…that these and many other things of a like nature should reveal themselves to me as in the possession of some blithering saphead who had no conception of where he is or with what surrounded."

It's hard to think of an industry other than government that is consistently filled with "blithering sapheads," but here we are.

What you can do

We'd like to see this movement gain traction, because while the I Hear of Sherlock Everywhere audience is significant, we need more people to take action.

The first thing you can do is to become a member of The Friends of Gillette Castle. You can determine what level of giving works for you, but it's as low as $10. You'll get newletters, invitations to events, a discount at the gift shop, and more. Please consider becoming a Friend.

The second thing you can do is to share this update. Email, social network, carrier pigeon—however you choose. We need people to see this and to care about William Gillette's legacy.

Here's hoping we can overcome the disinterest and neglect.