"I hear of Sherlock everywhere since you became his chronicler" [GREE] 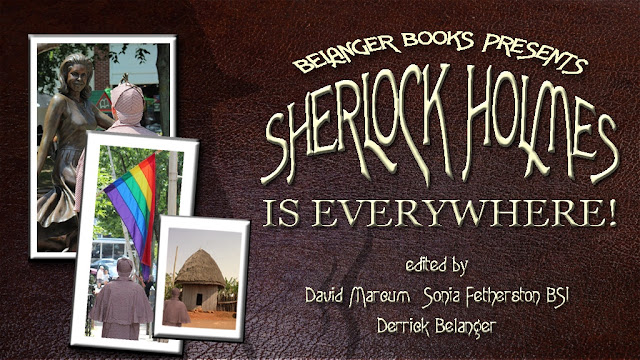 One of the reasons we started this site (way back in 2005!) is because we were constantly impressed with Sherlock Holmes popping up at every turn. More than books and movies, we saw the influence of Sherlock Holmes across popular culture.

As the internet has grown—particularly via social media in the last decade—we've seen Sherlock Holmes-related interests proliferate exponentially. In the great tradition of Sherlockians, people have been able to tie Sherlock Holmes to their own particular interests in life.

Belanger Books has initiated a Kickstarter for a book that chronicles just that. Sherlock Holmes Is Everywhere is a collection of scholarly essays on the different ways people connect to the great detective.

According to the project,

Derrick Belanger, Sonia Fetherston, BSI (""), and David Marcum are editing this volume that includes contributions from a variety of Sherlockians new and old from across the globe. Forty essays—including three from Sir Arthur Conan Doyle himself—capture the essence of why we love Sherlock Holmes.

There are a variety of reward levels available that include paperback and hardcover copies of the book, ebooks, and other titles from Belanger Books.

All proceeds from the essay collection will be donated to The Beacon Society, a scion society of the BSI which provides scholarships to schools, libraries, and Sherlock Holmes groups for educational purposes.