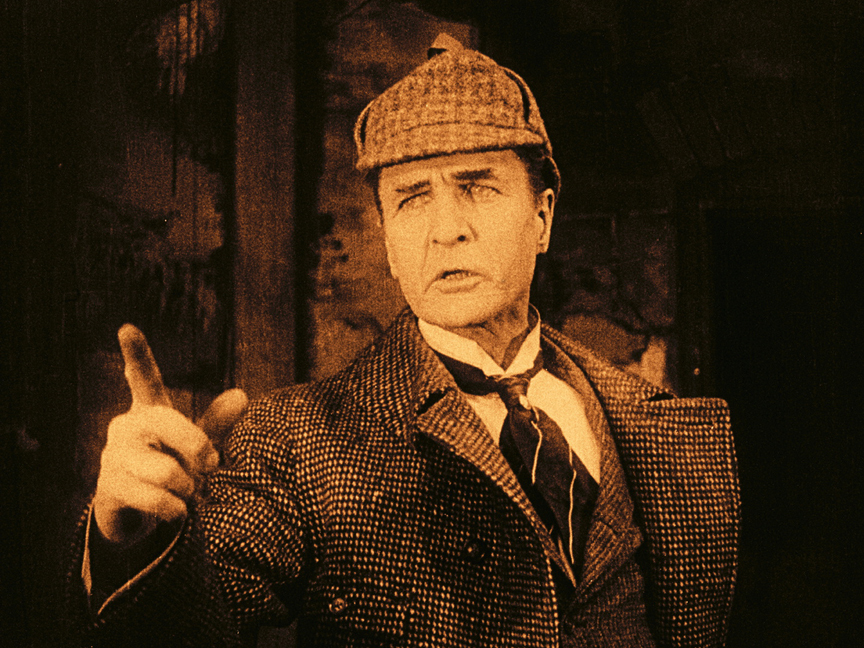 William Hooker Gillette, widely known for his portrayal of Sherlock Holmes on stage, died on this date in 1937 in Hartford, CT.

It was Gillette who, at the turn of the previous century, achieved matinee idol status and awoke the consciousness of theatergoers in the United States and Great Britain to the stage presence of one Mr. Sherlock Holmes, and continued to do so for the next thirty-eight years.

While he had no formal training, early on Gillette developed his stage manner of talking, not reciting:

“The idea is that we are not reciting literature – not reciting anything that has ever been said or written before; we are talking, saying the first things that come into our heads, thinking them out as we say them, hesitating and wondering and sometimes blundering over it all.”

This sentiment made him one of the first American actors to speak rather than declaim his lines, giving him a wonderful ability to underact.

His play, Sherlock Holmes, enjoyed universal success from 1899 when it debuted, through many revivals – Gillette himself appeared as Sherlock Holmes over 1,300 times. When it was finally turned into a film in 1916, the film was lost for nearly a century before being discovered, restored, and shown across the globe.

Gillette is also remembered for the remarkable home he built for himself on a cliff overlooking the Connecticut River in Hadlyme, Connecticut. Gillette Castle is as unique as the man himself, and he put in secret doors, special hardcarved locking mechanisms, and surrounded the property with a special narrow-gauge railroad. In recent years, Baker Street Irregulars Tyke ("The Man on the Tor") and Teddie ("Carina") Niver have become William and Helen Gillette, and have welcomed visitors to the Castle. We interviewed them on Episode 126.

William Gillette finally parted this world on April 29, 1937, at the age of 83. He was buried in Farmington, Connecticut next to his wife, Helen. His last will and testament was clear on his wishes for his property:


I would consider it more than unfortunate for me – should I find myself doomed, after death, to a continued consciousness of the behavior of mankind on this planet – to discover that the stone walls and towers and fireplaces of my home… my railway line with its bridges, trestles, and tunnels… my locomotives and cars…that these and many other things of a like nature should reveal themselves to me as in the possession of some blithering saphead who had no conception of where he is or with what surrounded.


Gillette might have been amused to know that his home entered the hands of Connecticut state government in 1943. Because we all know there are no blithering sapheads in government...

Sleep well, dear Lad – yes still to me
You are a lad of eighty-three!
Of all the lads beneath the sun
The most to be depended on.
Beneath the sun, beneath the sod
What matters it?  Leave that to God.

Sleep well at , old town
Of peace and beauty.  To lie down
In such a spot, for quiet rest
Surely were good, surely were best
Of fates for any man whose sleep
Would be content and long and deep.
Your kin are there beside you, so
Whether hot sun or winter snow
Visit the place there shall abide
A sense of kindred at your side;
Whate’er the legend cut in stone,
You are not lost or left alone;

And though no word escape your lip
Tranquil in that ripe fellowship
Yours is a happy end ----- ‘Tis we
Who mourn you, lack felicity!

The world – certainly the Sherlockian world – is richer for having had William Gillette in it. From the curved pipe to the phrase "Elementary, my dear Watson," the enduring image of Sherlock Holmes exists thanks in large part to him. His performance lives on in the restore 1916 film, and millions of tourists have seen his home.