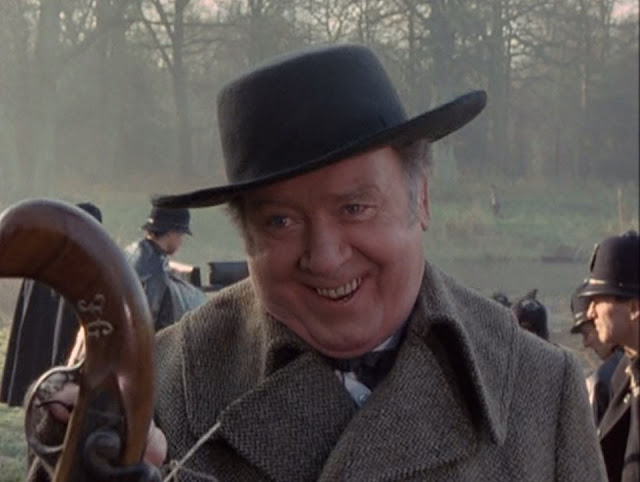 Freddie Jones, veteran actor of the stage, screen, and television, has died at the age of 91.

His career began late—he worked at a chemical lab factory for ten years before deciding to pursue his hobby—but flourished over the years, resulting in 213 credits on IMDb alone. The general public probably knows him from such roles as Bytes, the sadistic alcoholic showman in The Elephant Man, Thufir Hawat in David Lynch's version of Dune, and most recently as Sandy Thomas in the British soap opera Emmerdale.

But as with all things, we're interested in the connections to Sherlock Holmes here. Jones had a just a few of his own, but because he was so prolific, some of his non-Sherlockian roles intersected with other actors who themselves were in Holmesian films and shows.

In our circles, Jones is primarily known from two roles from the 1980s. His first Sherlock Holmes-related appearance was in 1985 as Chester Cragwitch in Barry Levinson's Young Sherlock Holmes. Cragwitch was the fourth intended victim of the Rame Tep, who was shot with a poisoned dart and subsequently attempted to kill Sherlock Holmes. It was only the appearance of Lestrade, who had pricked his finger on of the darts earlier, that saved the day.

Jones's other major role in a Sherlock Holmes production was as Inspector Baynes, the wily and good humored detective on the case in "Wisteria Lodge," from The Return of Sherlock Holmes by Granada. There was a good deal of energy masked beneath his relatively quiet demeanor in that role. And we seem to remember a video clip of Jeremy Brett speaking to an American audience (perhaps at a Sherlockian event in St. Louis?) about Freddie's appearance on set with a paper bag of jelly babies, which he jealously guarded against Brett's attempts to sample. [Editor's note: if any of our readers have a source on that, we'd be grateful.]

There was one other small appearance in the Granada series: a cameo as a pedlar in "The Last Vampyre" in The Case-Book of Sherlock Holmes in 1993.

Given that his credits are so voluminous, it's no surprise that Jones had connections to other significant Sherlock Holmes actors.

One of his earliest television appearances was as Claudius in the BBC's six-episode production of The Caesars in 1968. In that series, Sejanus was played by Barrie Ingham, who played Basil in The Great Mouse Detective. Donald Eccles played Nerva before going on to play the Reverend Duncan Nesbitt, who hallucinated about the stained glass knight in Young Sherlock Holmes.

The Caesars is the gift that keeps on giving, with Roger Hammond as Pomponius. Astute viewers may remember him as Jabez Wilson in Granada's "The Red-Headed League." The other name that pops out is André Morrell, who played Tiberius. Earlier, he played Dr. Watson to Peter Cushing's Sherlock Holmes in the 1959 Hammer production of The Hound of the Baskervilles.

Which brings us to Peter Cushing himself. His Holmesian qualifications need no recap. Cushing reprised his role as Baron Frankenstein in the 1969 Frankenstein Must Be Destroyed, with Jones as Professor Richter, the asylum director whose body becomes the recipient of a transplanted brain, and ultimately "the creature."

Given Freddie Jones's long tenure in entertainment—particularly British entertainment—he likely has numerous connections to other Sherlock Holmes productions. Six decades of experience likely give him more links than we'd get from a game of Six Degrees of Kevin Bacon. Perhaps you can add more in the comments below.

But we did want to close on one final connection: Jones's own son Toby is a fine actor in his own right. And Toby Jones played Culverton Smith in the BBC Sherlock episode "The Dying Detective."