"Upon the day that I crown my career" [FINA] 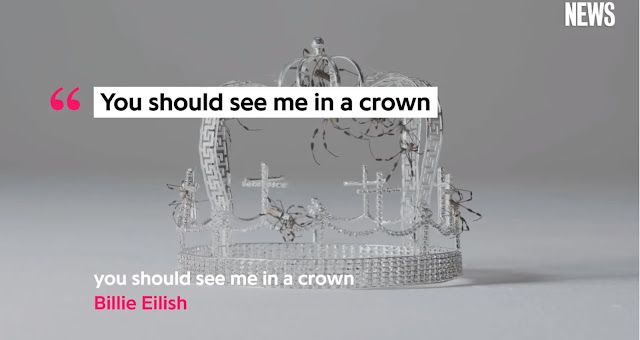 This maybe old news to some but I caught the video to Billie Eilish's song "You Should See Me In A Crown" on Friday, June 7, and the lyrics and video imagery seemed partially inspired by BBC Sherlock's "Reichenbach Fall" episode. Sure enough, in the time it takes to type "billie eilish you should see me in a crown bbc sherlock" into Google and read the first item listed, my hunch was confirmed.

Billie Eilish Pirate Baird O'Connell was born on December 18, 2001. Home schooled by parents who work in the entertainment industry. She told Vogue:


"I’ve been in the Los Angeles Children’s Chorus since I was 8. And my brother [Finneas O'Connell, born July 30, 1997] has as well. That’s where I’ve gotten all my singing technique, even though it’s mostly choral stuff. It’s helped me learn the proper way to sing and not ruin my voice completely. But I’ve just always sung, all the time. I sang so much that my family had to shush me. Then I started writing when I was about 11."


Finneas writes songs, has his own band and acts. He's been on Modern Family and Glee, to name two. Billie and Finneas also work together on Billie's career (an older generation might think of Karen and Richard Carpenter) when Billie's home-studio recording of Finneas' "Ocean Eyes" became a SoundCloud hit in 2016 and reached 84 on Billboard's Hot 100 in May, 2019.

Billie harnesses her inner Jim Moriarty in the chorus of the song:

You should see me in a crown
I'm gonna run this nothing town
Watch me make 'em bow
One by one by, one
One by one by

You should see me in a crown
Your silence is my favorite sound
Watch me make 'em bow
One by one by, one
One by one by (one)

She also wrote the story for the video by famed artist Takashi Murakami:

The spider motif is also from "Reichenbach Fall" when at Jim's trial Sherlock says,


"James Moriarty isn’t a man at all – he’s a spider; a spider at the centre of a web – a criminal web with a thousand threads and he knows precisely how each and every single one of them dances."

The official video for this song features Billie picking up a crown and with spiders crawling all over it (and later on her). Arachnophobes be warned; you should not watch. [Editor's note: Seriously. If you're freaked out by spiders, do NOT watch this.]

Billie's lyrics and videos can be a disturbing chronicle of the tribulations of adolescence (or as some might call it "Tuesday;" I know I did) but she has an incredible amount of talent that she has channeled to art.

To paraphrase Cumberbatch's Sherlock Holmes, Billie may be on the side of angels, but don't believe for a minute; despite her ethereal soprano, she is one.