"but now your thoughts went back to Beecher..." [CARD] 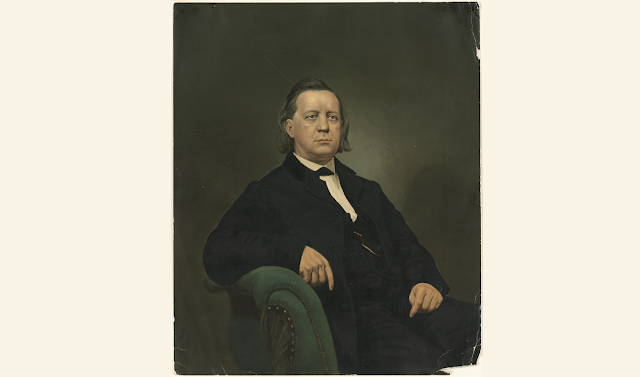 The opening of "The Cardboard Box" and later repeated in "The Resident Patient," are known to Sherlockians as "the mind-reading incident." Sherlock Holmes observes Dr. Watson for some minutes and in explaining his train of reasoning, describes how Watson stared at the photograph of clergyman and social reformer Henry Ward Beecher:


"But now your thoughts went back to Beecher, and you looked hard across as if you were studying the character in his features. Then your eyes ceased to pucker, but you continued to look across, and your face was thoughtful. You were recalling the incidents of Beecher's career. I was well aware that you could not do this without thinking of the mission which he undertook on behalf of the North at the time of the Civil War, for I remember your expressing your passionate indignation at the way in which he was received by the more turbulent of our people."


A modern biography, titled Henry Ward Beecher: The Most Famous Man in America, shows how Beecher was a superstar of his day. He managed to insert himself into many important issues of the day in America: anti-slavery and women's suffrage movements, the rise of the tabloid press and entertainment industry, and controversies from Darwinism to presidential politics.

So how was it that John H. Watson, M.D., late of the Army Medical Department, held Beecher in such high esteem? Watson was a stalwart defender of honor, and seeing a man ridiculed for his deeply-held beliefs must have irked him.

Was it the outrage over Beecher's adulterous affair with one of his most devout parishioners that set off the good doctor? Perhaps John "Three Continents" Watson felt a twinge of sympathy for this Lothario.

In a two-part episode of Trifles, we had a discussion about Watson's early years, with—for the first time ever on that show—a special guest lecturer. Be sure to subscribe there for a weekly update of discussion topics.


What was the deeply-held connection between Dr. Watson and Henry Ward Beecher? Stay tuned.