Doyle and the Great Authors of English Literature

"He would talk of nothing but art, of which he had the crudest ideas" [HOUN] 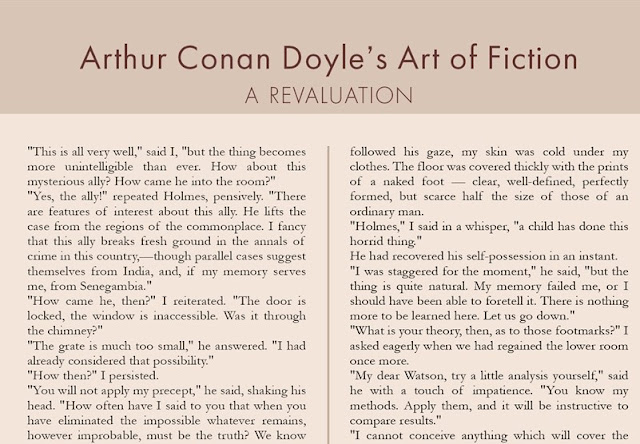 Nils Clausson, to paraphrase the autobiographical blurb on the back of his latest book, is Professor Emeritus at the University of Regina, Canada, specializing in Victorian and early 20th-century British literature, and has written extensively on detective fiction, fin-de-siècle aestheticism, genre theory and many of the authors of that era.

Arthur Conan Doyle’s Art of Fiction: A Revaluation is Clausson’s attempt to take Doyle out of the sub-literary category of genre fiction by not reading him through the lens of Foucault, Marx, Derrida, Freud or other literary theorists, which find nothing but faults which cannot explain Doyle’s and Sherlock Holmes’ enduring popularity, but through the lens “of literary criticism, unfashionable as that may be today.”

Clausson does not cover the whole of Doyle’s oeuvre or life but confines himself “to his best works, those that reveal his art of fiction,” including the Holmes stories. He dissuades the reader of the commonly posited notion that Holmes’ adventures are an optimistic Victorian view of the power of positive science.


"No, the stories do not reflect the power of positivist science. Holmes does. This is the view Holmes takes of himself, frequently endorsed by Watson, who in the first tale, A Study in Scarlet, proclaims that Holmes has ‘brought deduction as near an exact science as it ever will be brought in the world’ (SiS 36). A close reading of the stories reveals that all the science in them, as opposed to scientific posturing, can be written on both sides of one of Holmes’s index cards. Through a bifurcated narrative structure that combines a solvable puzzle with an insoluble mystery, the best Holmes stories critique Holmes’s science of deduction and analysis." (p. xiv)

[Clausson uses his own abbreviating system for Doyle’s’ stories which takes some getting used to for the Sherlockian raised on Jay Findley Christ’s four letter abbreviations. SiS = STUD = A Study in Scarlet]

Clausson demonstrates the puzzle/mystery duality in the first chapter with "The Cardboard Box." The puzzle of who sent Susan Cushing a cardboard box with two human ears by post is quickly solved by Holmes. “The words clear/clearing up and simple occur ten times in the story, eight of them by Holmes,” Clausson points out. But "The Cardboard Box"


"conforms to a pattern that is repeated again and again not only in the Holmes stories but in Conan Doyle’s gothic tales as well: a manifest mystery, which is rally a puzzle, counterpointed with a latent mystery that Holmes’s much vaunted science of deduction and analysis in incapable of fathoming, and in some stories one that Holmes is not even aware of. The ending of ‘The Cardboard Box’ does not, as might be expected of a conventional detective story, restore equilibrium by securing justice (although the murderer is arrested and will certainly be punished), but rather plunges Holmes and the reader into a new, unexpected state of disequilibrium." (pp. 35-6)

That mystery is Jim Browner’s confession, whose grizzly crime is committed by a rather sympathetic figure tormented by his crime; a reformed alcoholic, who, along with his wife Mary, is cruelly manipulated by his jealous sister-in-law Sarah. When Browner spurns Sarah’s advances, Sarah guides Mary into an affair with another sailor. Browner breaks his blue ribbon, that is falls off the wagon, and follows the lovers to New Brighton where they rent a boat to paddle out to sea. Browner follows suit. A fog forms and to Browner it seems that Providence has lent a hand in his quest for violent revenge.


"For the victims of this crime are not entirely innocent. In this story, as in the two stories mentioned in it by Holmes, Study in Scarlet and The Sign of the Four, moral (as opposed to strictly legal) guilt is clouded in a ‘haze’ of ambiguity. The contrast between Holmes’s confident use of the world clear—‘nothing could be more clear’—and Browner’s later, twice repeated use of ‘haze’ in his narrative provides a clue for understanding the moral complexity and ambiguity of the story. Guilt is rarely simple in the Holmes stories." (p. 39)


This, then, is the mystery that Holmes fails to solve and that Doyle wants the read to contemplate:


“What is the meaning of it, Watson?” said Holmes, solemnly, as he laid down the paper. “What object is served by this circle of misery and violence and fear? It must tend to some end, or else our universe is ruled by chance, which is unthinkable. But what end? There is the great standing perennial problem to which human reason is as far from an answer as ever.”

In chapter five, Clausson reads BLUE, SIXN, and REDH as “double-coded narratives—at once popular and literary—about the fate of art and the artist in a society of mass-marketed popular fiction of the sort that appeared in the Strand and its competitors.” Sherlockians know that Doyle held the popular Holmes stories in low regard and felt they kept the spotlight away from what he regarded as his serious work. Clausson marshals the evidence that when one looks beyond these adventures as formulaic detective stories and read them within the historical and cultural debates of the popular and literary in fin-de-siècle aestheticism, that Doyle devised an artistically complex and sophisticated form that works within the popular and transcends it.


Clausson also shatters those literary critics who only see Holmes as defender of Victorian middle-class values and protector of social order or Doyle as defender of the white privileged British Empire. Many is the time, more so than Clausson actually points out, that Holmes eschews helping the police or lets the criminal go free. The Sign of the Four, instead of holding up West over East values, shows white English Empire defender such as Major Sholto acting less honorably than criminal Small and the Muslim members of the Four; or as in the savagely anti-colonial satire that is The Lost World.


Clausson reminds us that readers today come to A Study in Scarlet expecting a detective story come away distracted by its twin stories, while reviews at the time had no problem with its structure “Reviews were predominantly favourable.” (p. 53) The detective story was in its nascent form in 1887 and readers had few expectations. Clausson drops genre expectations and reads STUD as Doyle intended it to be read before the form of the Holmes short stories were formulated, as a unified whole. Clausson sees it as Doyle combining genres, the detective story, the crime story and the Gothic tale, with “The Country of the Saints” section a crime story (with a criminal/hero protagonist as Patricia Highsmith might write) and the Gothic tale (specifically Thomas De Quincey’s “The Avenger”).


"The generic hybridity of Conan Doyle’s novella suggests that its focus is as much on the moral ambiguity of guilt, vengeance and justice as it is on detection. When [STUD] is approached as a hybrid crime-detective story about guilt, justice and revenge, rather than a failed ratiocinative detective story, the double narrative structure ceases to be an artistic flaw and becomes a form integral to its artistic success." (p. 58)

The second half is a revenge tragedy with Jefferson Hope a hero who must exact justice for John Ferrier and his adopted daughter Lucy when the law cannot, as in corrupt (and wholly fictional) Utah past or an out-of-jurisdiction London present. The novella contrasts the obsessed Hope who believes in the justness of his cause (Providence guides the hand of the guilty in choosing the correct pill in his trial-by-poison) and Holmes’ obsession in the intellectual puzzle solving through science and analysis. Again, the duality of the mystery/puzzle presented in the two halves shows Holmes easily solving the puzzle of who killed the visiting Mormons but not the why of how the crimes came to be.

In fact, the events of “The Country of the Saints” section is unknown to Holmes and Watson, and Holmes show a distinct disinterest in finding it out, leaving the reader with more knowledge than Holmes and able to judge the scope of events in a way that calls into question Holmes’ reliance on science. Both SIGN and HOUN in their individual chapters benefit from Clausson’s close reading.


Many of Clausson’s chapters were published earlier in slight different form in various journals and tighter editing would have help in making the necessary repetitions between chapters less repetitious. It may also have caught the errors of calling Jim Browner John Browner, attributing a piece of writing to Holmes instead of Doyle, or in comparing "The Noble Bachelor" with "The Man with the Twisted Lip," referring to Lady St. Simon as Lady St. Clair. Worse there are dozens of typographical errors, from having “Lustrade” and “Lestrade” uncaught mere words away from each other to missing open or close quotes or missing open or close parentheses or the occasional missing period. Even titles such as A Life in Letters and "Lot No. 249" are A Life in Letter and "Lost No. 249." I'm not sure what happened to the scholars at Cambridge Scholars, but for $72.11 at Amazon, I expect more academic rigor and do not want to be part of the crowdsourcing of a corrected second edition.

Clausson sums up Chapter One “The Conan Doyle Problem” this way:


"Most readers evince the same predictable response to the Holmes stories as to detective stories generally: they know what they are going to find in them and so they never fail to find it. If, however, we read ‘The Cardboard Box’—and the rest of Conan Doyle’s fiction—alert to signs of formal artistry, moral ambiguity, and intellectual depth, then we will have no more difficulty finding these qualities in it than we do in, say, James Joyce’s Dubliners (even if we still think Joyce is the better fiction writer). It can be debated just how good Conan Doyle is, but I see no way that any discriminating and discerning critic cannot but conclude he is more than a teller of tales, a master of genre fiction….The fact that the Holmes stories are still read by legions of appreciative readers and that even new historicists and cultural materialists write about them, rather than the deservedly forgotten stories featuring the rivals of Sherlock Holmes (as several out-of-print collections dub them), suggests that Conan Doyle’s stories may in fact possess some value beyond providing recreational diversion to casual readers or documentary evidence for cultural historians. Despite the ‘death of the author,’ Conan Doyle still, it would seem, has more cachet than Jacques Futrelle. The obvious reason is that whereas the author of ‘The Problem of Cell 13’ gives us nothing but the clever solution to a manufactured puzzle, Conan Doyle gives us works of art." (p. 49)


This is how I’ve seen Doyle, first intuitively for many years (Doyle is good, but, really, more than good) but gradually coming to the conscious realization that Doyle is a great writer. I’m sure I’m not alone; that many Sherlockians have felt various versions of that thought.

It’s nice to have Clausson confirm my thoughts and lay out the evidence for Doyle’s rescue from “popular author” in the sub-literary basement to his place in in the canon of English Literature. More, Canonical Sherlockians and Doyleans will find much to mull over and digest in this very readable (aside from its many typos) work.