Manuscript of 'The Dancing Men' Sold at Auction

"took out his manuscript to check my calculation" [MUSG] 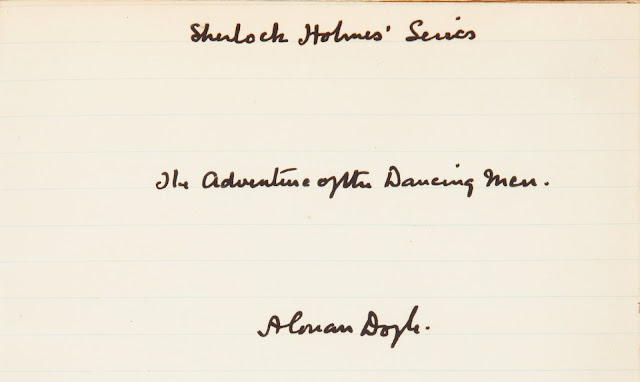 It is a rare occurrence when an original manuscript for a Sherlock Holmes story goes up for sale. The fastidious and neat writing of Arthur Conan Doyle make it fairly easy to read, and the dearth of corrections and edits are a wonder – demonstrating that the final product was often also the first draft.

The BSI Press created the Baker Street Irregulars Manuscript Series in 2001 "to bring to public view hidden treasures—namely, manuscripts of important works related to Sherlock Holmes, Dr. John H. Watson, and Sir Arthur Conan Doyle." And since that time, the series has resulted in no fewer than 12 books (click on the link above for a full list).

So, when an original manuscript makes its way to an auction house, it's something of note. And Randall Stock, BSI ("South African Securities") has been keeping tabs on the provenance and ownership of Sherlock Holmes manuscripts for some time. When "The Adventure of the Dancing Men" came to auction recently, Randall assembled all of the pertinent facts. [Note: Randall also wrote an entry for Dancing to Death, the BSI Press entry in its MS Series.]

Heritage Auctions featured the Autograph Manuscript for "The Adventure of the Dancing Men" on April 18, 2018. In this case "autograph" is particularly interesting, as there are three places where Conan Doyle signed it. 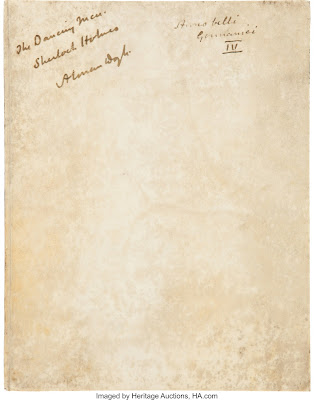 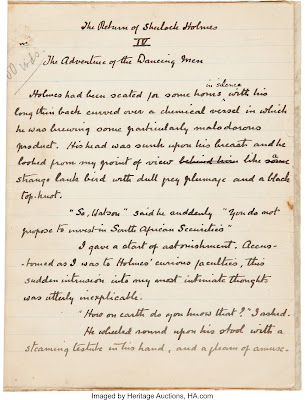 Written in 1903, the tale involves a client, Hilton Cubitt, who arrived at 221B Baker Street with a series of drawings that had been left in notes around his estate. The drawings consisted of little stick figures in various poses. Sherlock Holmes determined that this was a code and the drawings were actually messages. He and Dr. Watson raced to the countryside to prevent their client from coming to any harm, but were too late. Holmes then used the code to track the criminal. 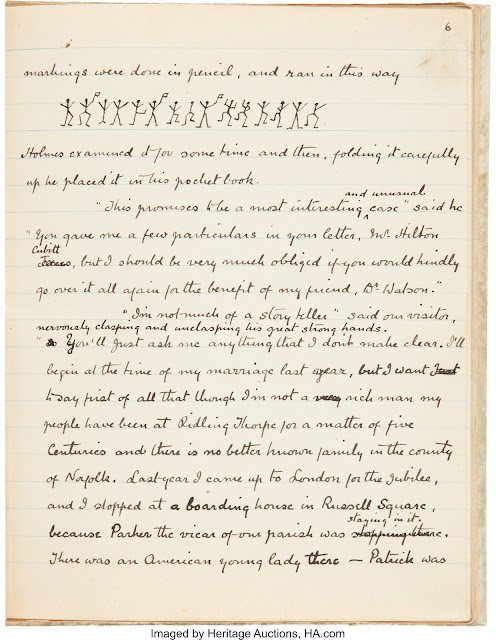 
"Conan Doyle got the idea for the dancing men cipher in May 1903. He signed a young woman's autograph book while staying at the Hill House Hotel in Norfolk (England). The book also contained drawings on another page by two children: Gilbert John Cubitt and Edith Alice Cubitt."

"Although the manuscript is not dated, Conan Doyle's diary and other sources suggest he finished the story in early June 1903. Written as the fourth story in The Return, it was published as the third tale in order to give a stronger start to the new series. It first appeared in the December 1903 Strand Magazine and in the December 5, 1903 issue of Collier's Weekly, and was later collected in The Return of Sherlock Holmes (1905)."


This is one of the few Sherlock Holmes manuscripts that contains more than simply text. "The Golden Pince-Nez" and "The Priory School" (interestingly, both part of The Return) each featured sketches – one of the layout of a house, the other of the topography of the land around the school and Holderness Hall – but both were on separate sheets of paper. In this case, the dancing men were part of the MS. 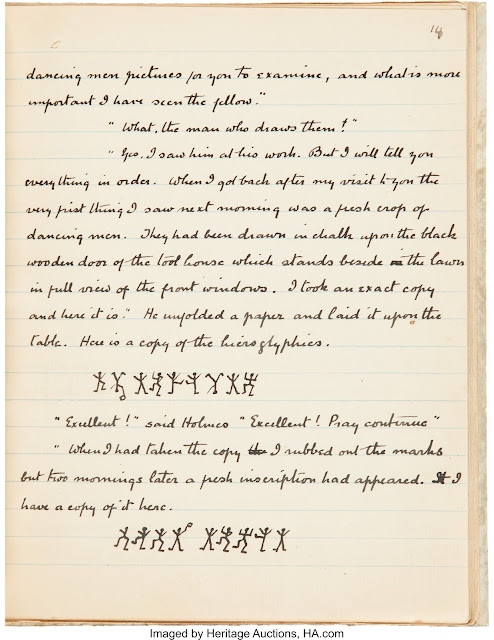 The manuscript is in very good shape, as Conan Doyle had it bound in vellum ten years after writing the story. It was presented at auction housed in full leather clam shell case with author and title gilt-stamped on the front and on the spine.

History of the Manuscript

The provenance of the manuscript and its rich history are fascinating. During World War I, Christies organized auctions of items donated by prominent citizens to raise money for the British Red Cross. Conan Doyle donated three manuscripts: The White Company, "The Norwood Builder," and "The Dancing Men" in 1918. The London dealer Maggs Brothers purchased the manuscript at auction for £10 10s. on April 22, 1918 – 100 years ago, nearly to the day! They sold it to collector David Gage Joyce, who owned at least 10 Conan Doyle manuscripts during his lifetime.

Joyce sold the manuscript from his collection at the Anderson Galleries on February 13, 1923 for $105. It then traveled back to England and was sold at auction by Hodgson's on January 28, 1925, along with manuscripts for "The Priory School" and "The Solitary Cyclist" for £66. Its whereabouts was unknown for 40 years. It was purchased by Brian Perkins in Texas circa 1974 and subsequently given to Laura Perkins Mercer in 2012.

Its discovery at a construction site is a story worth reading. For more details, see "Tracking 'The Dancing Men': Its History and Manuscript" by Randall Stock in Dancing to Death (2016).


Interestingly, in his 1927 list of the best Sherlock Holmes stories, Conan Doyle placed this story at #3, and resulting surveys have placed it in the top 10.

The item listed on the Heritage Auctions site for an opening price of $250,000. When the hammer finally fell at 11:00 am in Dallas, the manuscript for "The Dancing Men" sold for a total of $312,500, including the buyer's premium. The identity of the winning bidder was not disclosed.

The full story of the manuscript alone is worth purchasing Dancing to Death. But consider the large display of the complete manuscript itself, the text version, and the many essays, about the story and its associated topics, both personal and insightful, and there's no excuse not to buy this book.

Other sources of interest


Thanks to Heritage Auctions for use of the images.