"if they let me loose in the treasury at Washington" [VALL] 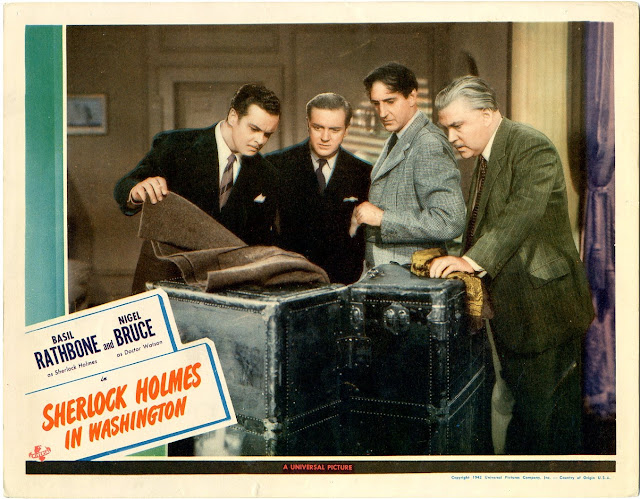 The year 1943 marked the fifth film in the Basil Rathbone / Nigel Bruce series of 14 films, with Sherlock Holmes in Washington making its debut on April 30.

The plot of the film involved Sherlock Holmes being engaged by the Home Office to locate a British subject traveling for his law firm to Washington, DC. The man flew to New York City and then took the train to Washington. On the outskirts of the city, the man was kidnapped and had not been seen for several days. Holmes learns from the Home Office that the man was in fact a government agent who was delivering a highly secret, two-page document to the U.S. government. In verifying the contents at his flat, Holmes concludes the document had been reduced to microfilm. The question becomes whether he may have had the opportunity to pass the microfilm to someone else on the train before he was taken.

See Sherlock Holmes in Washington on the big screen!

And now, 75 years after its debut, the Diogenes Club of Washington, DC announces its first "Matinee at Diogenes Club" with a special screening of Sherlock Holmes in Washington at the AFI Silver Theatre and Cultural Center in Silver Spring, Maryland on Saturday, April 14 at 11:30 a.m.

Details on reservations below.

Return to a world where Holmes visits our nation's capital to fight deadly Nazi sympathizers, hobnobs with Georgetown society, and collaborates with the “Washington Police” to recover ultra-secret intelligence documents. 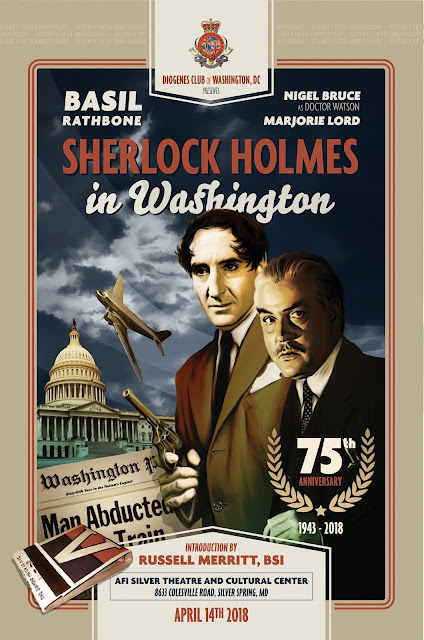 The screening will be preceded by featured speaker Russell Merritt, BSI (“The Trepoff Murder”), Professor of American and European Film History in the Film and Media Department of the University of California, Berkeley. Professor Merritt is the foremost expert of Sherlock Holmes and the cinema, and was instrumental in the screening of the rediscovered William Gillette film of 1916.

This is the film that features not only Henry Daniell, but George Zucco – two of the foremost villains in the entire series. In addition, you'll be able to see Basil Rathbone's famous windswept hair, making a repeat appearance following Sherlock Holmes and the Secret Weapon. 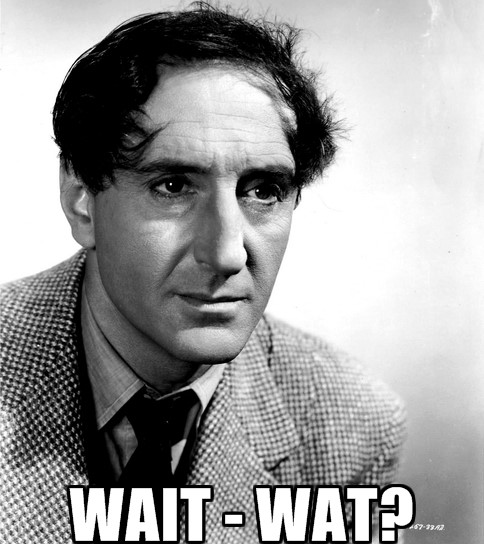 We hope you'll take advantage of this very special opportunity to see Basil Rathbone appear as Sherlock Holmes on the big screen, in a wonderful setting.

And if you'd care to learn about the Rathbone-Bruce partnership, please tune in to Episode 122 of I Hear of Sherlock Everywhere:

Cost: $35 per person covers admission. Refreshments, including beer and wine, will be available but are not included in admission.

Payment: You may send a cheque for $35 per person made payable to Michael J. Quigley, to 2651 Fort Scott Drive, Arlington, VA 22202
OR
You may pay via PayPal to: cemartin AT umich DOT edu. Please choose the "Send Money to Family and Friends" option. If you choose this method of payment, tickets are available for just $30.