“on such a fool's errand, Watson" [RESI] 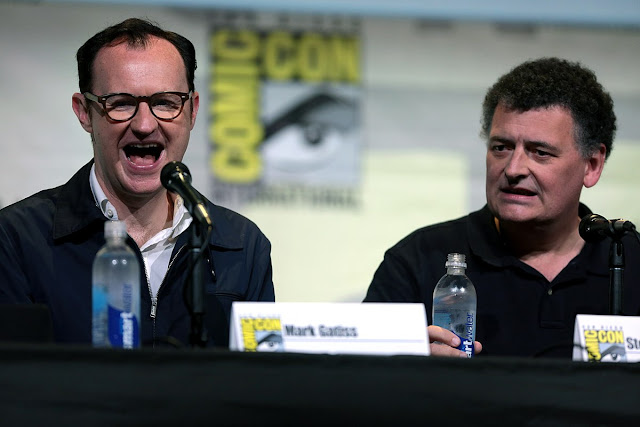 In January 2018 at the Radio Times Covers Party, Steven Moffat had some vague but encouraging news for Sherlock fans and those looking forward to his and long-time friend and co-creator of Sherlock Mark Gatiss’ Dracula:

Gatiss tempered the sentiment with a practical air:

Moffat seems to think that the show about the great undead will keep the duo occupied for some time, as he noted that they've "got a lot of ideas [about Dracula]," and "need to go and sit down now and really talk about it.”

“But once we get moving, we’ll move fast.” Gatiss agreed, “It’s early stages. We’ve had a lot of talks, a lot of meetings, our favourite part – throwing ideas around.” All is not lost, however. I Hear of Sherlock Everywhere has discovered exactly what those ideas have netted.

More Sherlock – By Half

Because of their grueling and sometimes unpredictable schedules, Benedict Cumberbatch and Martin Freeman won’t be returning to the small screen. Instead, Holmes’ adventures will continue as Hartswood Films and Chuck Lorre Productions have teamed up to put the detective, his doctor bestie and cute daughter in a prime-time multi-camera sitcom to air on CBS in the 2018-19 season, Two and a Half Sherlocks.

At a press conference this week to discuss the upcoming new show at CBS in Studio City, California, Steven Moffat joined Mark Gatiss and American writer-producer Chuck Lorre, saying, “Mark and I really felt that this was the best way to keep the Sherlock brand going while we wait for Ben and Marty get the free time in their busy careers to do BBC Series Five."

Lorre, whose resume includes such long running hits as Roseanne, Grace Under Fire, The Big Bang Theory, Mike and Molly and Mom, added:

“When Steve and Mark came to me with the idea, I was totally blown away. But when they screened ‘The Final Problem’ [the last episode of Sherlock Series Four] I could see how it and Two and a Half Men were bookends of the same premise—a high functioning sociopath and his best friend single dad living together with the best friend’s kid, who has the potential to put a major crimp in the sociopath’s lifestyle. Throw in the mystery-of-the-week angle and the comedy just explodes off the screen.”

“We couldn’t be happier working with Chuck,” said Gatiss. “He really is an auteur of the multi-camera sitcom, a talented writer and meticulous producer.”

Major casting is already complete with the American sitcom equivalent of the Royal Shakespeare Company lined-up and ready to go. Matthew Perry (Friends, The Odd Couple) will be Sherlock Holmes. “I’m a big fan of Benedict [Cumberbatch] and Matt Frewer’s comedic turns as Sherlock,” said Perry at the event. “I’m looking forward to playing such an iconic character. When I was a kid, I used to pretend I was Basil Rathbone’s Sir Guy of Gisbourne from Errol Flynn’s Robin Hood and, you know, I got that whole substance thing down pat.”

Kevin James has been cast as Sherlock’s lovable sidekick Dr. John Watson. “I’ve never played a doctor before,” said James (King of Queens, Kevin Can Wait, Paul Blart:Mall Cop). “I played a retired cop and security consultant on Kevin Can Wait, so I can probably do Sherlock Holmes, but I’m looking forward to the acting challenge of being a doctor. Nurse, scalpel, stat! Code blue! Turn your head and cough! Watson is that kind of doctor, right?”

Rounding out the family circle is Aubrey Anderson-Emmons (Modern Family) as Rosemond Mary Watson Holmes, Jr. In a separate interview, the almost 11 year-old said, “Playing a girl brought up by a brilliant, but emotionally distant detective and a stalwart doctor/father who is the moral compass for his friend, and who never knew her mother is the kind of opportunity that an actor will always regret not playing, and I'm very happy to have the opportunity.” When asked if she was looking forward to working with Matthew Perry and Kevin James as Sherlock and John, Aubrey became thoughtful. “Oh, s—t. Excuse me, I have to call my agent.”

Widow of a drug kingpin, Mrs. Hudson, the trio’s landlady, will be Kathy Bates (American Horror Story, Harry’s Law). “She’s the perfect combination of Berta and Mrs. Hudson,” said Lorre, “Her dead pan delivery of ‘Not your friggin’ housekeeper, dear’ has me rolling on the floor ever time! We also have Ken Jeong [Dr. Ken, Community] as Greg Lestrade, who is the perfect foil to play off of Matthew’s antics.”

“One of the things I’m really, really excited about,” said Moffat, “is that we have Nancy Kulp [who passed away in 1991] as Molly Hooper. Kulp, you know, played Miss Hathaway on The Beverly Hillbillies. Her unrequited love for Jethro Bodine was the inspiration for Molly, and when we found out that CBS owns the rights to her digital image and that the technology is at the point where we could seamlessly integrate her image in front of a studio audience, well I couldn’t pass that up. She was a brilliant, brilliant comedic actor and well, truth be told, I had a wee bit of a crush on her when I was a kid.”

“We’re going to get Tracey Ullman to do her voice.”

“She owes me,” added Gatiss flatly, without elaborating. “I’m excited that we’ll have Jim Parsons [The Big Bang Theory] to play Jim Moriarty—not the one that shot himself—but one of the triplet brothers who are all named ‘Jim.’ We need for Sherlock to have a nemesis and American audiences are familiar with Moriarty, even though on our show he was really the puppet of Sherlock’s younger sister Eurus.” Sherlock’s sister is not one of the characters from Sir Arthur Conan Doyle’s books, although she had a big part on Sherlock’s last season. “We may occasionally mention her,” continued Gatiss, “but she is probably funnier as an unseen menace. Like Maris on Frasier.

"I'm also happy to report that Stephen Fry [The Great Indoors] will play Mycroft [Holmes]." Gatiss famously played the detective's older, smarter brother on the BBC series. "There is no one I would love seeing in role more than Stephen. He played Mycroft brilliantly in the Robert Downey, Jr. movies and he will add gravitas to the new series."

"There comes a point in every actor's life," said Fry, "when there are more roles in the rear-view mirror than on the road ahead and the dawning realization that that retirement villa in Corfu was the foolish dream of a young English major at Queen's College, Cambridge and not the obtainable goal of a respected actor-director-documentarian-journalist-author. And I can't wait for bloody RDJ to get off his arse and make another Sherlock Holmes film! I've got rent to pay!"

Completing the cast is Leslie Mann (George of the Jungle, Rio) as the late ninja assassin wife of John, Mary Morstan Watson, who will appear in prerecorded video messages to Rosemond at the end of every episode to give her daughter timely advice on growing up.

Fans of Sherlock will willingly look to Two and a Half Sherlocks to fill the void left by Cumberbatch and Freeman, and with Lorre’s track record of long-running TV hits, that void could be very long indeed.