Did Conan Doyle Discover the True Identity of the Ripper? 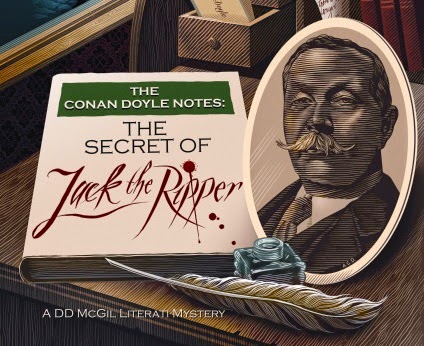 In September of 2014, the news broke that author Russell Edwards working with molecular biologist Jari Louhelainen, had analyzed DNA evidence from one of the Ripper victim's shawls.  This evidence seemed to single out Ripper suspect Aaron Kosminski, a polish immigrant whose DNA was a match to that found on the shawl.  So, was the case closed?

Not so fast!  Author Diane Gilbert Madsen claims that not only has the DNA evidence against Kosminski has fallen apart, she also claims the mystery was solved long ago, by none other than Sir Arthur Conan Doyle.  and Joseph Bell. Madsen names the killer in her latest book, The Conan Doyle Notes: The Secret of Jack the Ripper. [Amazon]  I interviewed Ms. Madsen over email about her book, the Ripper case, and Sherlock Holmes.


IHOSE: The Conan Doyle Notes is a modern day mystery starring your literary sleuth, DD McGil. What made you decide to write the story in modern times as opposed to a historical mystery starring Doyle and Dr. Bell?

Diane Madsen: The Conan Doyle Notes is the third book in the DD McGil Literati Mystery Series, the first being about Robert Burns and the second about Hemingway. The entire series takes place in modern times as opposed to being period-piece historical mysteries. The main character, DD McGil, is a very contemporary person, and her persona would not transfer well back to Victorian England where she would be shunned, ostracized and probably even locked up in Bedlam. I also set The Conan Doyle Notes in modern times because it gave me a chance to use all of the resources that have accumulated since 1888 concerning both the Ripper murders and Conan Doyle -- information I could not have used if it had been written as a contemporaneous mystery. I did, however, do a great deal of research on both Doyle and the Ripper case, and I’ve tried to use only historical facts throughout the book.


IHOSE: Like Doyle's London, Chicago is an important part of your story such that the setting almost feels like a character. Why did you find Chicago was the perfect city for telling this tale?

DM: I was born and raised in Chicago. I love the City and enjoy making Chicago a character in my DD McGil Literati Mystery series because there is a distinct feel about the place and its people. Chicagoans tend to be down to earth and hard working and perhaps a little sentimental. We love our heroes and hate our villains. We support our city, our teams, our schools and our friends; and above all we display an enduring hope for the future. These characteristics come from our connective, collective experiences living in the city.

First of all, we must contend with our name which, taken from the Ojibwa Indians, means ‘skunk.’ Then too, we used to be known as the Second City before LA went on steroids. We knew we were number two, not number one, and we were never allowed to forget it. That mind set fostered a certain perverse twist to our egos and our ids. Then there’s our weather. Let’s face it, when it’s nice, it’s really nice, but when it’s not, it’s horrible. And it’s horrible usually six months out of the year. That’s why we don’t act like carefree Californians. No – we need our coats, our scarves and our gloves. We don’t go naked into that good sunlight in January, and it marks us for life. On top of that, as fans of the Chicago Cubs, we were doomed to never win a pennant, thus scarring our whole outlook on life, luck, talent and ball club owners.

On the positive side, even though we’ve lost Marshall Fields, Chicago’s still got the Lake, the Loop, the EL, Lake Shore Drive, Water Tower, Wacker Drive underground, and a heck of a lot of monumental architecture – good and bad. Chicagoans have risen above our name, our teams and our size. We’re the Windy City. We’re the City of Big Shoulders, and my characters in the DD McGil Literati Mystery Series are like the city – we rise above the difficulties and rely upon internal characteristics that come from our roots and our passions about the city.

In setting my books, I’ve used many well known Chicago landmarks such as Soldier Field, Wrigley Field, and Graue Mill, the oldest working mill in the area and where I served as a Board Member. I’ve also used Chicago’s weather seasons to give readers a feel of the hardiness it takes to be a Chicagoan. And, as with every writer, my characters are connected to my own life and experiences in the city. My main character, DD McGil, lives in Wrigleyville, as I did, and she’s a Cubs fan, as am I. Her university connections come from my own associations with the University of Chicago which I attended as an undergraduate. Like Chicago, DD is stubborn, sassy, determined, and loyal to her friends. .


IHOSE: This is a tricky question because I don't want to give anything away, nor do I want you to in your answer. You have said you feel that the DNA evidence used to name Aaron Kosminski as the killer is problematic. What makes you feel that you've come to the correct conclusion in your book? 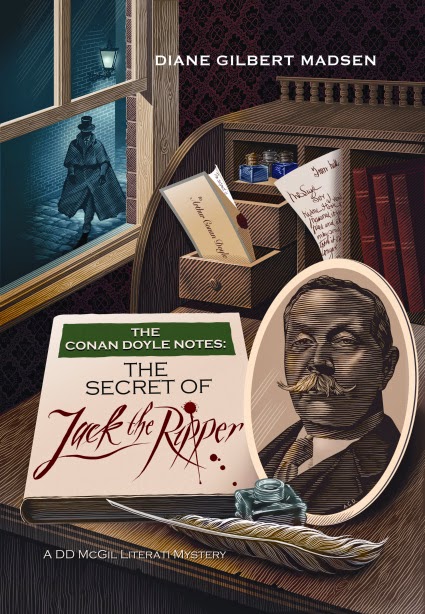 DM: You are so right. This is a tricky question. First, let’s tackle the DNA evidence used to identify Aaron Kosminski. When a group of DNA experts poured over the findings, they found that the molecular biologist made a fundamental error in calculations. The fatal flaw was an error in nomenclature. The smoking gun is that the biologist referenced the wrong mutation (314.1C) – a rare mutation - from the michtochondrial DNA database. The correct mutation (315.1C) which he should have used is not rare at all. It is so common that it’s shared by 99 percent of people of European descent. So the same DNA match would have been seen with almost anyone who had handled the shawl over the years – including perhaps hundreds of people.

Secondly, let’s look at my suspect, who here will remain nameless because I hope people will be interested enough to read the book. When I began looking at the Ripper case, it struck me that each of the suspects became a suspect because someone advocated their guilt from the bottom up. I love to do research, and I had the advantage of starting with a huge amount of materials. I tried putting the pieces together as a modern police officer might do on a cold case, from the top down, without any preconceived notions. I used the Sherlockian method to develop 10 clues which lead to my suspect. While nobody today can say with certainty who the Ripper was, I believe that my solution takes into account all of the available evidence and considers things that various advocates find it convenient to minimize or ignore. I'd love to hear from readers about what they think of the clues I propose and the solution I offer in the book based on those clues. I tried to make everything in the book about the Ripper case as accurate as possible. I looked at what the police involved in the case said (often that they knew who the Ripper was but wouldn’t say), and at the news coverage, the eye-witness testimony, and the suspects. I also looked at what happened to various suspects and police after the murders. My suspect is chosen based on the ten clues I offer in the book. These clues link a chain of evidence – much of it circumstantial – but strong enough when taken together to confirm the suspect I identify as Jack the Ripper.


IHOSE: You've written other DD Mcgil mysteries in the past. This is your first to focus on Doyle. Will we see more of DD in the future? Any chance she will return to the realm of Doyle or Holmes?

DM: People tell me that DD McGil is a very interesting character, so yes, I intend to give her more outings. Her next adventure is entitled, The Cardboard Palace, and it contains some of the work that Bram Stoker did as the Literati character.

The Literati Series is a continuing series, and DD’s encounter with Conan Doyle has marked her and made her into a Sherlockian. In future DD adventures, watch for DD to be quoting Sherlock Holmes and talking about Holmes plots and even joining a Sherlockian Society.

On a slightly different note, I’m working on a deadline to finish a non-fiction work entitled Cracking the Code of the Canon, a look at how Sherlock Holmes made his decisions, to be published this summer by MX Publishing.


IHOSE: The question all Sherlockians dread! If you were stranded on a desert island and could only have one Sherlock Holmes story with you, which would it be and why?

DM: This is my favorite question, and I don’t have to think twice. It would most definitely be "The Musgrave Ritual."

Not only is this my all time favorite Holmes story because of the connection with the Stuart monarchy and the royal regalia, but it’s also a gem of a story because the butler did it. It would be even more valuable to have it with me if I were stranded on an island. Halloa, I would use the text within The Musgrave Ritual as a guide to my escape.


I would seek to follow this ritual catechism with the hopes that it would lead me to a path off the island. (Given the island would have oaks and elms and an “under” of course. If not, I’d have to work to decode the message.) 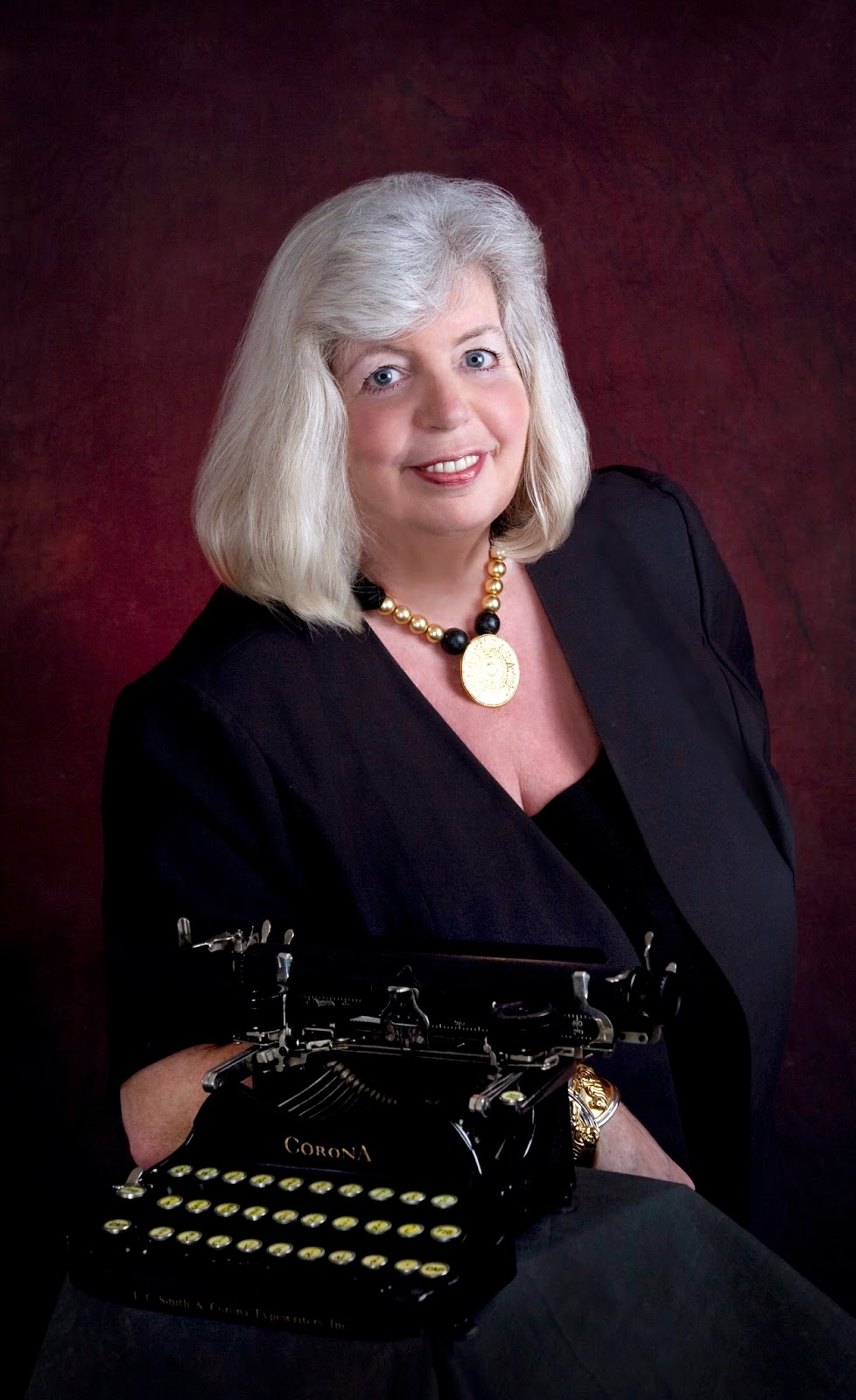 DM: I’ve already mentioned the upcoming non-fictional Cracking the Code of the Canon: How Sherlock Holmes Made His Decisions,” coming out this summer, as well as the next book in the DD McGil Literati Mystery Series, The Cardboard Palace featuring Bram Stoker. I also have two more DD McGil plots – one entitled Dark As Shadows featuring Robert Louis Stevenson, and one on Edgar Allan Poe entitled Restless Bones.

I have submitted a screen-play to my agent entitled Young Hemingway, which is currently at Paramount.

I’ve also been asked by Hallmark Mysteries to submit six DD McGil Literati Mystery plots for a possible TV series on their network.

And, as a result of an extremely good article on The Conan Doyle Notes in Radio Times by the terrific writer Paul Jones, I’ve been approached by a London TV and film producer who is putting together a TV series on Doyle, Dr. Joseph Bell, and the Ripper case.