Two of the earliest Sherlock Holmes-Star Trek Crossovers were created before Lt. Commander Data donned a deerstalker. The Intergalactic Etc. Sherlock Bones series is arguably the first Star Trek crossover character (1975), as it predates The Federation Holmes (1978). These stories represent opposite ends of the crossover literature; The Federation Holmes is a Sherlock Holmes pastiche, while the Sherlock Bones series was a Star Trek parody.

In the 22nd Century, Sherlock Holmes and Dr. John Watson are recreated on the planet from the original Star Trek series episode “Shore Leave.” Their existence is devised to counter the evil of the previously recreated Professor Moriarty. These stories first appeared in issues of The Holmesian Federation, which first appeared in 1978. Twelve original and one bonus story were collected in The Federation Holmes: Casebook Number One: A Baker's Dozen of Sherlock Holmes – Star Trek Parodies by Dana Martin Batory. 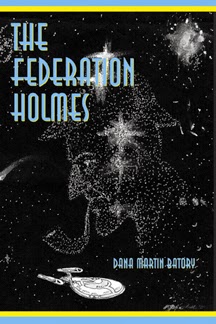 The first story in The Federation Holmes features the crew of the Enterprise. Later, they appear only in cameo roles. Quickly Holmes and Watson set up their agency on Memory Alpha. Holmes dives into learning alien cultures and customs; collects his scrapbooks; and resumes publishing scientific papers. Watson adopts the new medical instruments, stashing his medical tricorder, medikit and hypo spray in his Gladstone bag. Some memorable guest stars were Cyrano Jones, Denebian Slime Devils and a mention of Lord Peter Blau.

The stories are well written, and have a distinct Watsonian flair for painting the scenes that bring a reader into the story. Unlike the original Canon, the stories were written in the third person.

With titles like “The Clandestine Adventure of the Arcane Tomato” and “From the Reminiscences of Doctor Leonard McCoy”, the stories were tongue in cheek, with Dr. Leonard “Bones” McCoy putting Nurse Chapel to work as his assistant, Nurse Watson. He created his own network of crewmembers to aid in his investigations, the Medical Unit Irregulars, headed by Ensign Chekov. Together they fought against the evil Professor Spockiarty. Some of the stories borrowed incidents from the Canon and adapted them to adventures onboard the Enterprise.

As an editor-author of the Intergalactic Etc., it would be difficult for me to objectively review these stories. Rereading them during the writing this post has proven entertaining as well as nostalgic. They were written during the editors’ years in high school and college, spanning almost a decade. An objective review that appears on Halliday’s Zinedex commented “they've grown on me and now I think they're pretty fun.”

These fanzines are occasionally available on eBay, but there is a rumor that the editors are considering a re-release. You can read about The Adventures of Sherlock Bones here.

This post covered two of the earliest Sherlock Holmes-Star Trek crossovers. Since then, there have been countless stories published or posted to the web. To start learning about more recent crossovers, check out Fanfiction.net, a database of fanfiction works.


These crossovers influenced both universes. Tying Sherlock Holmes into the Star Trek universe was a way to increase the buzz about a canceled series and engage more fans. In those day, fanzines and conventions were the primitive equivalent to current social media.

When the first story appeared in the first issue in 1975, the series had concluded six years previously, leaving the fans wanting more. The Star Trek fan movement and the fanzines kept the franchise alive, and even influenced the naming the first space shuttle built for atmospheric test flights. At the time when these early stories were written, Star Trek’s fan movement may have influenced the Sherlock Holmes universes less dramatically, but it served as a way to keep the Canon relevant.

The stories demonstrated that Sherlock Holmes can be part of any place, any time. The influence of Star Trek’s fan movement is more evident today, having laid the groundwork and demonstrated how fans can engage with the universe of Sherlock Holmes, where it is always 1895.

Lest we forget, Nicholas Meyer, BSI ("A Fine Morocco Case"), author of The Seven Per-Cent Solution, also directed Star Trek II: The Wrath of Khan. His memoir, The View From the Bridge: Memories from Star Trek and a Life in Hollywood, spans those connections. You can listen to our two interviews with Meyer in Episode 85: Nicholas Meyer and Episode 178: The Adventure of the Peculiar Protocols.
--
3/20/2015 09:58:00 AM
blog, fandom, M.M. McMahon, pastiche