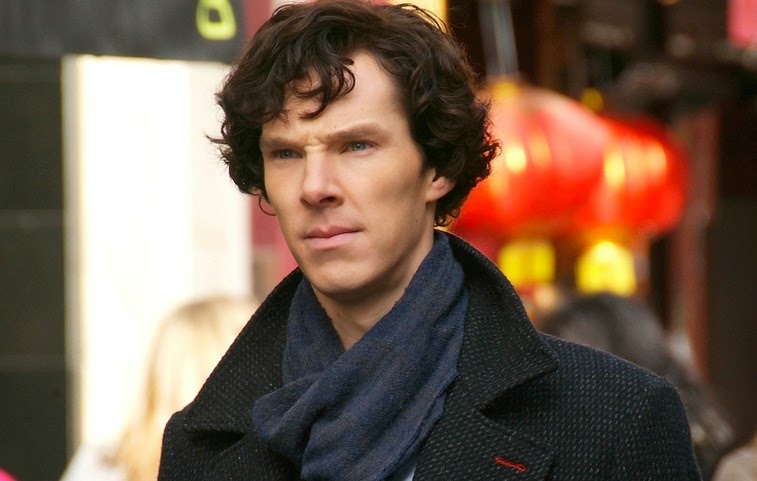 Now that the Oscar® dust has settled, we know that Benedict Cumberbatch has gone home empty-handed. Yet of all the Best Actor nominees, Mr. Cumberbatch seems to be the one that garnered the most press attention.  An edition of The Radio Times included three different Cumberbatch covers, plus a contest to send in your best illustration of the star. A separate article in The Radio Times by Cumberbatch biographer Lynne Porter focused on the Oscar race and Cumberbatch's onscreen longevity. While the Oscar race has been the main focus on Cumberbatch for the last few weeks, it is important to note that the role this award winning thespian will always be remembered for is that of Sherlock Holmes.

Let's face it, despite the cries from Holmes purists, Benedict Cumberbatch is the current generation's Sherlock Holmes. While Robert Downey Jr.'s Holmes is popular in film and Jonny Lee Miller's alternate Americanized modern Holmes garners respectable ratings, neither actor will be remembered for those roles.

Sorry guys, when people think Holmes, they think Cumberbatch. This is despite the fact that Cumberbatch's Holmes is quite far removed from the original canon. Although it should be stated that all current Holmes incarnations are far removed from the original canon with the Downey Jr. films being the closest (at least in time period), and those overblown action-fests surely are a long way off from Doyle's intentions.

What does this mean for Cumberbatch? It means that he now joins the ranks of only a handful of actors who have come to define the world's first consulting detective.  William Gillette is the first actor to truly become Sherlock Holmes. Gillette used the curved pipe, now a Holmes staple, so that he could say his lines with the pipe in his mouth, and he was the first to state the line, "Elementary, my dear Watson." After Gillette came the great Basil Rathbone who defined Holmes during the war years of the 1940s. While his early Holmes films took place in the traditional Victorian time period, most of Rathbone;'s films, like that of the current Sherlock series, were set in modern times.  This allowed Sherlock Holmes to battle Nazis and stand with the allied powers, helping with the war effort.

While a great many other actors played Holmes in the years after Rathbone, it wasn't until Jeremy Brett took on the role that another actor came to define the character. The Granada Sherlock Holmes series was made up of accurate retellings of the original Doyle stories. Brett added a higher pitched voice to Holmes, and the actor's portrayal of the detective is often cited by Holmes traditionalists as the greatest filmed version of the detective.

After Brett undoubtedly comes Cumberbatch who in some ways combines the takes on Holmes by Rathbone and Brett. Like Rathbone, Cumberbatch's Holmes works in the modern day.  Often the episodes are influenced by the original stories, but the plots veer far away and deal with such issues as terrorism, celebrity, and even family squabbles.  Like Brett, Cumberbatch's Holmes is a unique take. The actor plays the character as a detached, cold man seemingly without feelings.  This has led to speculation that his Holmes lands on the autism spectrum.

While Mr. Cumberbatch's career continues surging, and he takes on more roles that are Oscar-worthy (Flying Horse) or blockbuster (Dr. Strange), he still continues to act as Holmes.  The end of 2015 will see his take on "The Adventure of the Blue Carbuncle," and 2016 may see a fourth season of Sherlock.  Even if these episodes wrap up Cumberbatch's role as the world's greatest detective, he will live on like Gillette, Rathbone, and Brett before him, as this generation's Sherlock Holmes.