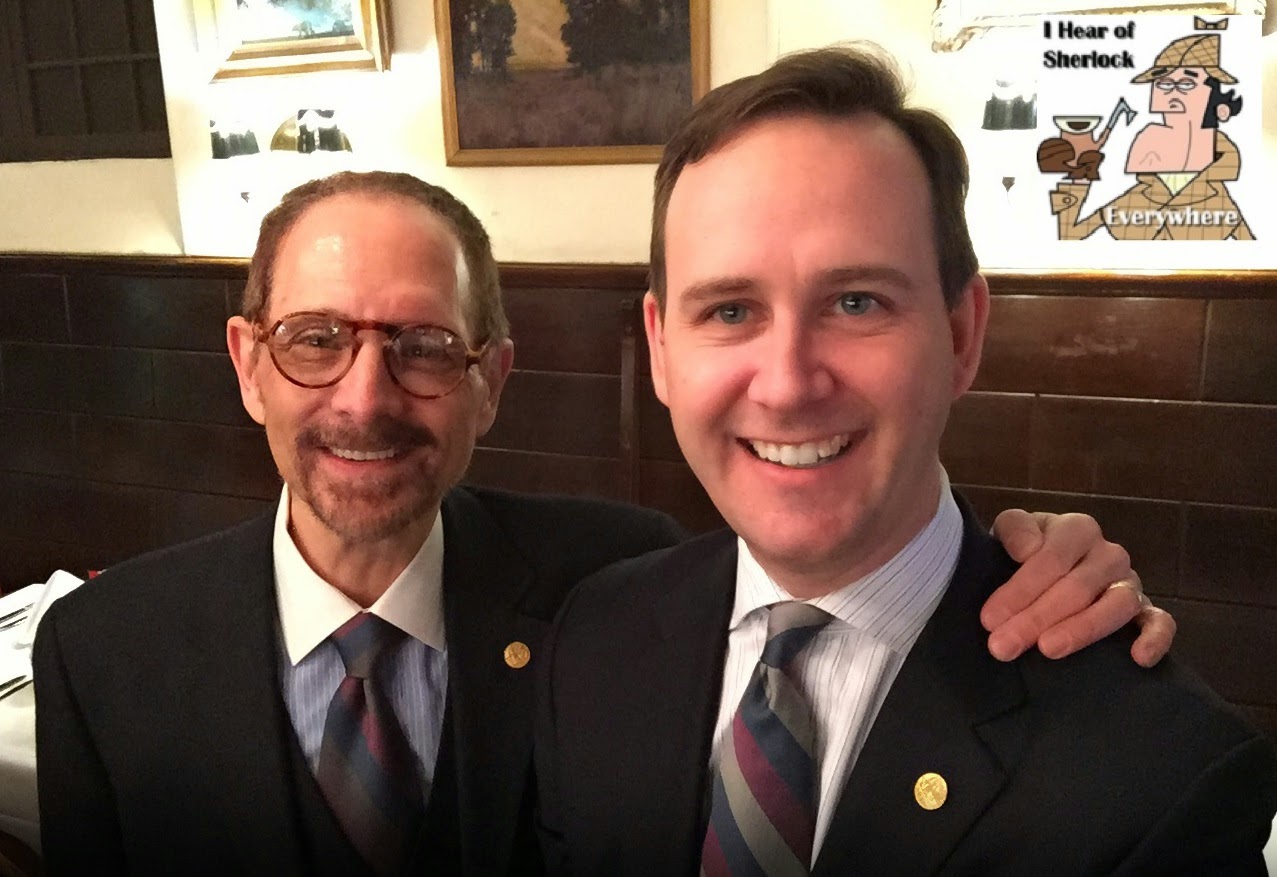 The #BSIWeekend 2015 is in the history books. As usual, it was a reminder of the richness of friendship and fun that are the side effect - and in some cases, the driver - of our interest in Sherlock Holmes. And it is the subject of this episode of I Hear of Sherlock Everywhere.

As you know, the Baker Street Irregulars (and Friends) Weekend is a gathering of some hundrends of interested Sherlockians that is always full of food, fun and friends, and this year was no exception. In fact, this year it coincided with the 125th anniversary of the birth of Christopher Morley, the founder of the BSI, and the 100th anniversary of the publication of The Valley of Fear.

One of the highlights for us was the Lunch of Steele at the Salmagundi Club, honoring the memory of Frederic Dorr Steele, one of the great illustrators of the Sherlock Holmes stories. Burt has hosted this luncheon for the last 12 years, and he tells us why he decided to bring back the tradition of Morley's Three Hours For Lunch Club under the topic of Steele.


There at the club, we enjoyed an intimate setting that allowed us to share a variety of interests and to capture a couple of those legendary stories that aren't documented in writing. We refer, of course, to Peter Blau, who regaled us with a John Bennett Shaw story and an Al Silverstein tale.


We also reflected on the associated interests of Sherlockians that brought us to other societies such as the Victorian Military Society, the English Speaking Union and others.

One of the common interests of Sherlockians is comedy. David Stuart Davies has always been a star attraction at comedic efforts at our gatherings. And this year was no different, with Davies doing a one-man rendition of a Goon Show-like interlude called "A Quartet of M's," which we have a short audio clip of within the show. If you'd like to watch the full version, please check out the full video below (recorded with the permission of the BSI's "Wiggins," as you heard in Episode 71).

The investitures this year were nothing short of thrilling, with two very special ones. Kristina Manente of the Baker Street Babes received the investiture "Grace Dunbar," and Emily Miranker is now "Lady Hatty St. Simon." We have audio clips of each of them, including some commentary from her father, Glen Miranker, BSI ("The Origin of Tree Worship").


If you'd like to see more photos from the 2015 BSI Weekend, here's a slideshow from our Flickr set:

The Editor's Gas-Lamp for this episode is "Watson's Wound: Real of Phantom?" by Robert Katz, MD, BSI from The Watsonian (Vol. 2, No. 2).

Many more links, articles and images are available in our Flipboard magazine at bit.ly/FlipSherlock (NEW and improved on the web!) and Scoop.it page, as well as on the The Sherlock Holmes Community on Google+ (still growing, now at over 2,300 members), as well as through our accounts on Facebook, Twitter and Tumblr.

This episode includes three sponsors that deserve your attention: