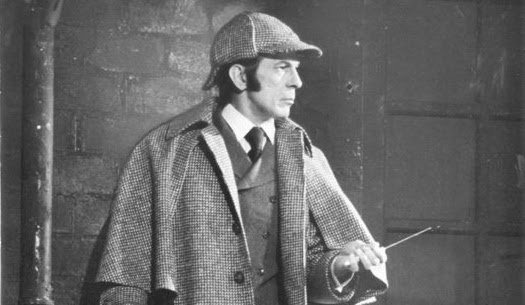 Leonard Nimoy, best known for his role as Mr. Spock in Star Trek on television and film, has passed away at the age of 83.

While Nimoy was a poet, photographer and musician, he is most widely known for his acting - a profession he had pursued continuously since beginning in community theater at the age of eight.

As Sherlockians know, he also had a connection to Sherlock Holmes. The image above is Nimoy portraying Sherlock Holmes in a 1975-6 revival of William Gillette's famous play "Sherlock Holmes" by the Royal Shakespeare Company.

Playing the great detective was not a stretch - not only because of Nimoy's lifelong practice of the craft, but because of the connection between the highly logical Mr. Spock. Those who paid attention during Star Trek VI: The Undiscovered Country heard the half Vulcan utter:

"An ancestor of mine maintained that if you eliminate the impossible, whatever remains, however improbable, must be the truth."

Nicholas Meyer, BSI ("A Fine Morocco Case"), who wrote the book and screenplay for The Seven Per Cent Solution also wrote and directed Star Trek II: The Wrath of Khan - and the above mentioned Star Trek VI, so there should be no doubt about the hand that steered Holmes and Spock together.

And for those of you who are truly into arcana and wish to honor the memory of Leonard Nimoy, we'll leave you with this portrayal of the detective in the documentary short Sherlock Holmes: Interior Motive (1975).

For many fans, it will be hard to accept that Nimoy is no longer with us. Or as Spock would say, "Highly illogical."