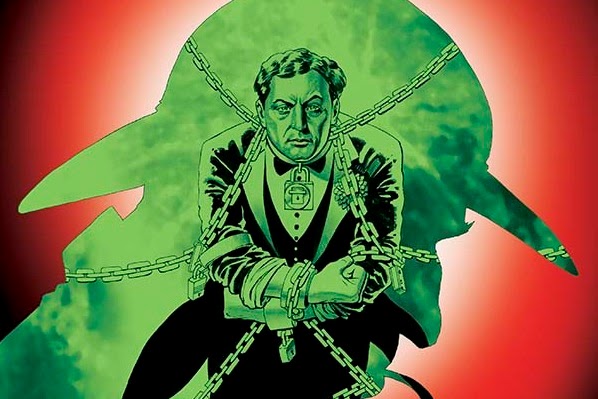 One of the more fascinating aspects of Conan Doyle's life was his later friendship/rivalrywith Harry Houdini, as both men approached the then-prevalent notion of spiritualism from differing viewpoints. Taking on the notion of otherworldly powers from both a logical and magical perspective seems like a perfect opportunity to have Houdini match wits with the Great Detective.

Dynamite Entertainment's Sherlock Holmes vs. Harry Houdini, takes the notion one step further, and crafts the beginning of a cracking good tale. (Note: a complimentary electronic copy was provided for purposes of review)

Written by Anthony DelCol and Conor McCreery (Kill Shakespeare), Sherlock Holmes vs. Harry Houdini takes place in 1900, with a scene straight out of the canon: an escape artist performs at Scotland Yard, and the opening captions set the scene, both foreshadowing a twist and describing the escape artist's situation. After the escape, a prisoner openly mocks the escape artist, describing in detail how the escape artist managed his feat.

As you may have guessed, the escape artist is Harry Houdini, and the prisoner....is Sherlock Holmes.
To go into further detail would spoil the story, but DelCol and McCreery's setup is clever - both men get involved in a series of events of an unearthly nature. Never devolving into horror or fantastic realms, there's a strong sense of familiarity with Holmes, and there's a great emphasis on the theme of rationality vs. spiritualism. (Although, knowing Conan Doyle's position, this tale might not have occurred within the canon). This is a great first chapter that leads into a promising, entertaining tale that any Sherlockian could enjoy. 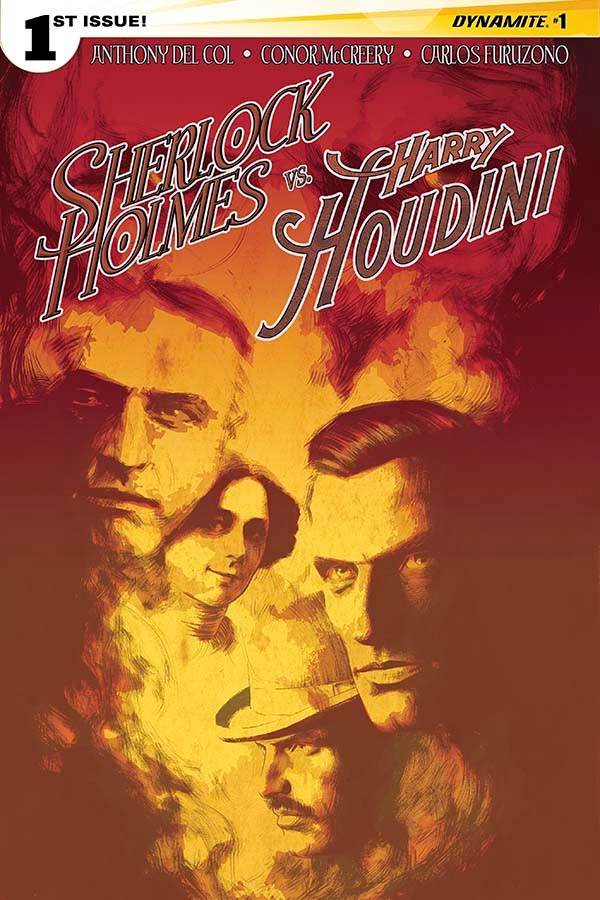 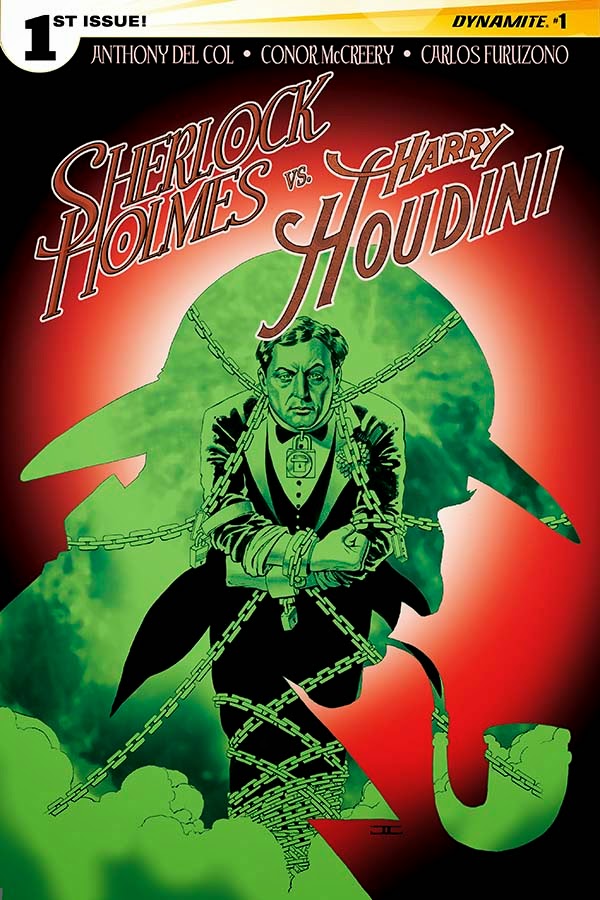 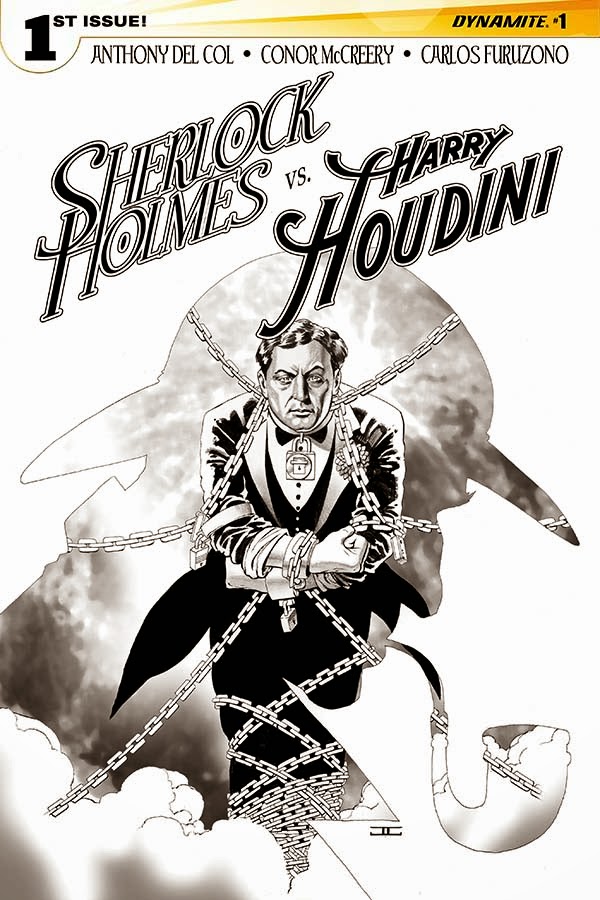 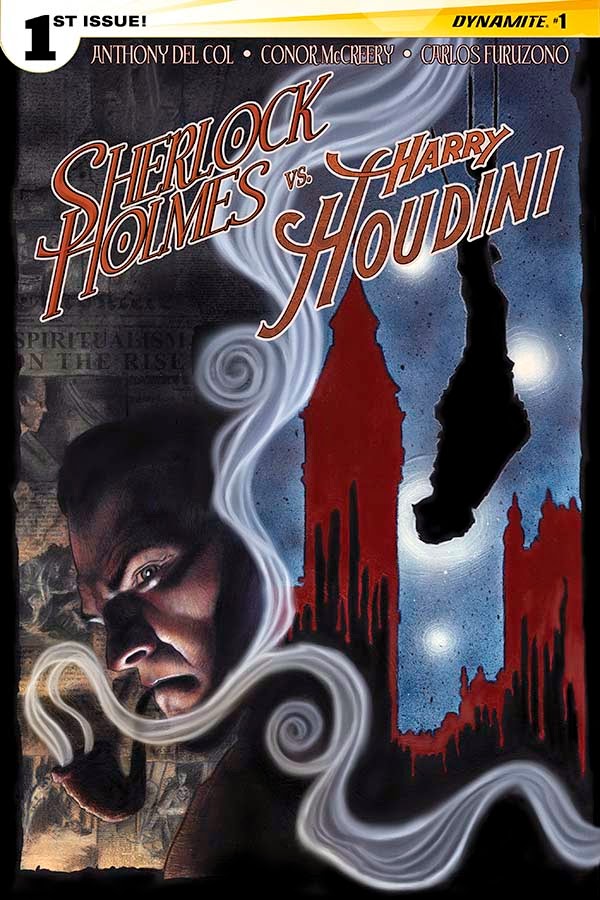 One of the highlights of Sherlock Holmes vs. Harry Houdini is also the interior art by Carlos Furuzono. Not only is it pleasant to look at, it also captures the essence of the characters without being slavish. (If you're looking for a photorealistic approach, this is not it - but it works within the story). There's a great sense of composition, and provides plenty of appealing visuals (with some exceptional coloring by Aikau Oliva) to complement the story. Even the lettering by Rob Steen helps establish the time, place, and mood of the tale - never obtrusive, yet working to foster the early Edwardian era in which the comic takes place. 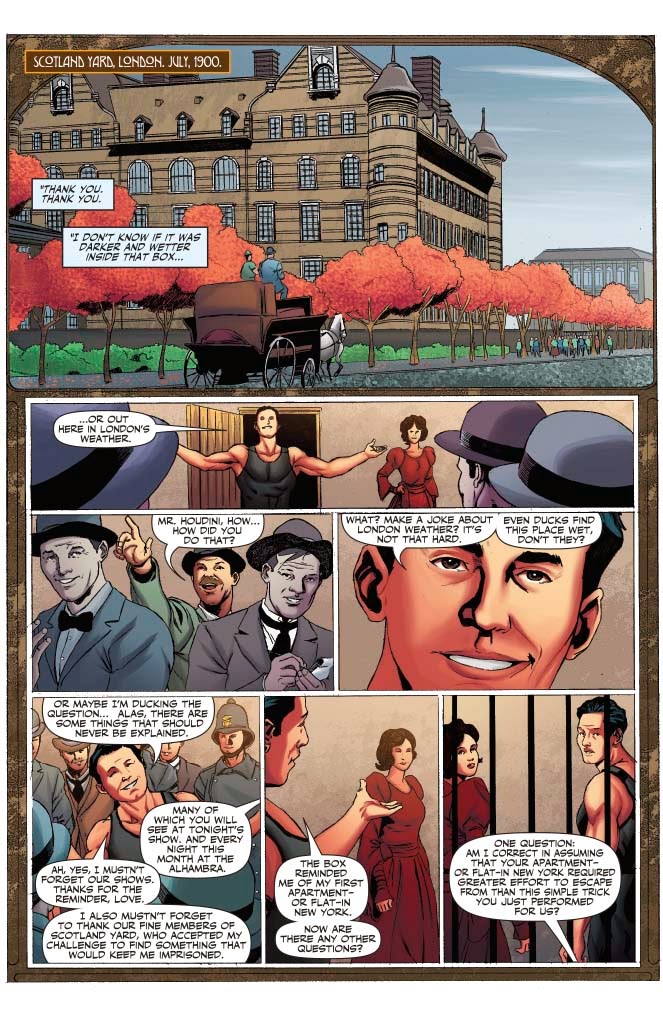 Many pastiches may team up Holmes with a variety of characters from the same era, but often with mixed results. Dynamite Entertainment's Sherlock Holmes vs. Harry Houdini takes a more creative approach, focusing on a more "contemporary" era and finding a common theme between its two protagonists. This is a great comic for any Sherlockian, and is a definite must-read.

Sherlock Holmes vs. Harry Houdini #1 is the first in a five-issue series under this title. Available from Amazon US and Dynamite Entertainment.