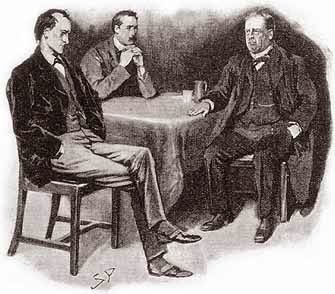 Andrew Page ("Lord Saltire") died in New Jersey on May 10, 2013 at the age of 60. He attended the Bronx High school of Science and Columbia University and taught high school English. In the mid-80's he took a sabbatical from teaching high school English and spent six months living in a Zen Buddhist monastery. He then went on to earn BS and MA degrees in mathematics and became a professor of math at a community college in New Jersey.

Andy enjoyed playing jazz bass guitar and eventually did some back-up playing for B.B. King, who was one of his idols.

He first became interested in Sherlock Holmes during his high school years prompted by watching the Basil Rathbone films. During the summer between his junior and senior years he read the entire Canon. His enthusiasm for all things Sherlockian was an all-consuming passion.

Dozens of junior scion societies were formed during the late '60's and early 70's and "seasoned" Sherlockians served in advisory roles. In 1971 Andy formed the Priory School of NY as an adjunct to the Baker Street Pageboys, and ran the group as "Lord Saltire." Advisor Steve Clarkson called him "Lord Saltine."

He was the editor, and publisher of The Holmesian Observer, which was run off on a mimeograph machine. He had six articles published in The Baker Street Journal between 1971-1975 and wrote two stand-alone monographs -- A Canonical Handbook and The Priory Papers: A Study in Examination. He also corresponded with other Sherlockians on a grand scale. His enthusiasm was boundless.

In 1973 three groups merged: Musgrave Ritualists Beta, the Three Students Plus, and The Priory School. This new group, co-founded by Bruce Kennedy, Bill Walsh, and Andy Page was named The Three Garridebs, which continues to thrive.

The junior Sherlockian movement was the subject of The Baker Street Journal Christmas Annual in 2003, and Andy Page was featured in its pages.

He attended only two or three BSI Dinners. He got sick during the cocktail hour at the 1974 dinner and left, thereby missing his investiture award. By 1977 he had completely dropped from the Sherlockian scene focusing instead on teaching.

Andy Page was invested into The Baker Street Irregulars in 1974 as "Lord Saltire."