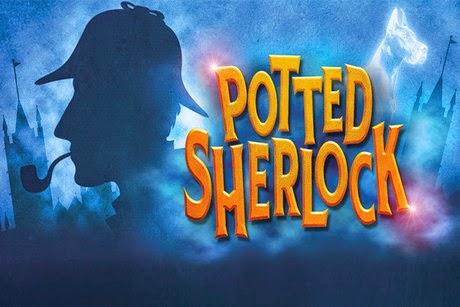 The Fringe Festival in Edinburgh, Scotland, is the world's largest arts festival with over 45,000 performances and more than 3000 shows packed into almost 300 venues across the city each year in August. The Fringe is open to all: anyone can perform and everyone does - from students to superstars.

Since Edinburgh was the birthplace of Sir Arthur Conan Doyle and Sherlock Holmes is the world’s most famous literary detective, you might think that the Fringe could play host to all sorts of Sherlockian events – and you would be correct.


This year saw lectures about ACD at the Arthur Conan Doyle Centre, Edinburgh Medical Detectives featuring Dr. Joseph Bell, the inspiration for Holmes, two different productions of The Hound of the Baskervilles, and even a Forensic Mind Reader who promised to deduce personal information about you a la Sherlock. Besides the scheduled Fringe events the National Library of Scotland has the original manuscripts of The Illustrious Client, and Doyle’s first short ghost story The Haunted Grange of Goresthorpe, written possibly in 1877 or 1878, plus select ACD correspondence. And across from the Conan Doyle Pub on Picardy Place there is a statue of Holmes commemorating the birthplace of his author  Watson’s literary agent, Doyle.


But this year’s Fringe premiered Potted Sherlock – all sixty stories told in a fast moving seventy minute comedic production of farce, word play, sight gags, pop culture references, frantic costume changes, seltzer bottle slapstick, skits and songs. The longer skits focus on the Hound (hoooooowwwwwwlllll), The Sign of Four, "The Speckled Band" and A Study in Scarlet with appearances of the demi-puppet Moriarty at inopportune times.  The family-friendly show glosses over Holmes's use of a seven-percent solution and manages to condense 21 stories to a few lines each in a musical number parodying Billy Joel’s We Didn’t Start the Fire:

Chorus:  He’s a private dick for hire
And we’re all involved in the cases he’s solving.
Follow clues until we retire,
And then proceeding to do some beekeeping...

GIRL: (as Watson) Case of Silver Blaze
Jockey dead and horse is maimed
JEFF: The Jockey tried to fix the race,
The horse then kicked him in the face

Any Sherlockian worth his salt* can deduce which stories are very succinctly sung in these five snippets:

#1
GIRL: (as Watson) Trouble on a wedding day
DAN: (as groom in top hat) Why did my bride run away?
JEFF: Elementary, her old fiancé
Put a note in her bouquet

#2
GIRL: (Watson) A man dies he’s in pain
Says something about a lion’s mane
DAN: (As small boy) Perhaps a cryptic final wish?
JEFF: No, just a breed of jellyfish

#3
DAN: (as Watson) A jewel thief is on the loose
JEFF: He hid the jewels inside a goose

#5
DAN: (in Naval Officers hat) My butler was snooping around,
Here’s a riddle that he found,
JEFF: This says that buried in your grounds,
Is Charles’ the first’s golden crown


I attended Potted Sherlock twice – it was that much fun and the lines flew by so quickly that I wanted a second opportunity to try to catch them all (and discovered that some of those ad libs were in name only and worked because of clever scripting and the performers’ great timing). Dan Clarkson, one of the authors, played Holmes, Watson, Moriarty and whoever-else-was-needed. His longtime partner, Jeff Turner, and Lizzie Wort, an old classmate of Dan’s from Bretton Hall, University of Leeds, also madly traded deerstalker, pipe and bowler as required as the three alternately played Holmes, Watson, Mrs. Hudson and also whoever-else-was-needed. The enthusiasm they brought to this comic re-telling of the Canon was infectious and the hammy asides Dan made to the audience created a warm rapport with young and old.

Potted Sherlock follows the award winning Potted Potter, all seven Harry Potter books told in seventy minutes, which debuted in 2006, had five sold-out Fringe seasons, five sold-out London runs, extensive United Kingdom and international tours prior to its critically-acclaimed US premiere at the Little Shubert Theater in New York City in 2012. Potted Sherlock will be opening in London’s West End at Christmas time. Let us hope that the troupe brings their talent to NYC once again.


I was fortunate enough to be able to interview the writers, Dan Clarkson and his brother Tom, after one of the performances. Before seeing the show and meeting them I was a bit cynical about how they came to write a comedic show about Holmes and Watson. The Harry Potter series, much loved as the stories are, was complete and Potted Potter had run its course. With the great entertainment media interest in Holmes the last few years, I initially thought that they might be just jumping on a bandwagon.


I quickly discovered that these two brothers are true Holmes fanboys – the show was created from the heart, with their love and admiration for the stories showing through the on-stage shenanigans. In fact, when they learned that I was a BSI member, they said they were nervous about hearing from a Sherlockian expert ("My blushes, Watson!"), asking if I thought they were being faithful to the stories. Dan told of reading the tales growing up and even arguing with a teacher that the most venomous snake in the world was the Indian swamp adder – Sherlock Holmes said it was so!

The two of them wrote a few skits making fun of some of the inconsistencies (?!) in their favorite stories when Dan’s producer suggested doing all 60 stories in a Potted version. They welcomed the challenge and began researching and writing.They spent weeks re-watching the Granada Jeremy Brett series and Basil Rathbone movies and re-reading the stories.They also spent a day or two in Dartmoor to experience the gloomy atmosphere as they were writing the script. Despite the silliness inherent in the show, I think their love for Holmes and Watson comes through clearly.

As popular and successful as Potted Potter was, I predict that Potted Sherlock will be even more popular.  If you are fortunate enough to be in London this Christmas season, do not miss it. As soon as I learn of its US debut I will be purchasing my ticket!