"A higher judge had taken the matter in hand" [STUD] 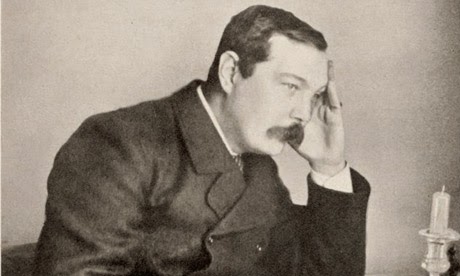 In the last installment of the case of Klinger v. Conan Doyle Estate, Ltd., we were aware that the CDE had until March to file for an appeal, which it did. You'll recall the discussion we had with legal scholar and Baker Street Irregular Betsy Rosenblatt on the Special Episode in December. There's a great background of the case and next steps in that audio recording. Here is all of the coverage we've had of the case to date.

It was entirely appropriate then, that the appeal hearing should take place on May 22 - Sir Arthur Conan Doyle's birthday. And it was even more momentous that we Brenda Rossini, an avid Sherlockian, was in attendance at the Seventh Circuit Court of Appeals in Chicago for the appeal. The panel consisted of judges Flaum, Posner, and Manion.

It should be noted that Judge Richard Posner is a legal scholar of some renown and a well-read jurist; in fact, he reviewed The New Annotated Sherlock Holmes, in which he noted that the "Holmes stories and the Holmes persona seem to me wildly overrated, and this annotated edition an eccentric venture."

With that unflattering review, we now turn it over to the observations of Ms. Rossini:


Judge Posner was indeed on the panel; the Klinger v. CDE case was preceded by a number of lawyers -- at times fatuous, unimaginative, incapable of going beyond the four corners of their arguments and at wit's end when Posner interrupted (repeatedly, as in "Answer the question...Yes or No...not "If'," and that was the less brutal).

The oral argument is available to listen to. It can be downloaded from or heard directly on this link from the Seventh Circuit Court of Appeals.

For the Appellant/Conan Doyle Estate, soft-spoken, precise, cautious Benjamin Allison:
Like a racehorse, Posner interrupted within seconds, and the tenor of which, was words such as "threats," "spurious," "incomprehensible."

Soft-spoken Mr. Allison began with his legal argument (set forth in the Brief, so why bother repeating what's in the judges' hands?) that Klinger had merely asked for an advisory opinion of the lower court, and that the decision of the lower court should be reversed. Posner didn't like this tack one bit: Klinger had to resort to the court because You (Posner's pronoun) said you'd sue. You used a threat.

He said Klinger's was a justiciable case. He rejected Allison saying that it had no "immediacy or reality." Posner scoffed then and scoffed throughout.

More words from the Posner: "You put Klinger in a terrible box and caused him to spend a lot of money, and you made your threats."

Allison tentatively objected to using the word "threat." But Posner said when you say "it's all copyrighted and you can't do that, you're making a threat."

Another thing that annoyed Posner was the use of a "mural" to pose the ACD argument-- that SH and Watson are all part of the big picture.

He went on and on about the mural--it really got under his thin skin-- and finally forced Allison to "abandon the mural argument." Posner also managed to weave in the memorable "Your argument is incomprehensible."

Posner said the ACD estate was being ambitious and aggressive in seeking to enlarge a copyright so no one could use what was properly in the public domain.

"What do you regard as non-violative?" he asked Allison. No answer.

"What you're asking is "the irresistible temptation for any copyright owner to perpetuate a copyright." "It's a game being played here."

Posner stated explicitly that the "46 stories" (which Appellee corrected later as 50) are no longer copyrighted. They are in the public domain; Klinger can do anything he wants with them. He is not infringing when he uses them. Klinger was not asking to infringe, "but to get the Conan Doyle Estate 'off his back.'"

He advised the CDE to simply set out the limits for Klinger; he will be cautious and not violate the copyright on the 10 remaining stories. He will acknowledge that he can do whatever he wants as long as he doesn't infringe on the copyright of the latter 10.

Appellee Jonathan Kirsch for Klinger -- brilliant, florid, lucid, imaginative, in control of the panel. He spoke, they listened.

He began at the outset, forcefully, with the "fog of uncertainty" metaphor," where people are made to pay by the intrusive CDE, which they prefer to do rather than incur lawsuit fees.

He said Klinger wanted the declaratory judgment, quick, simple, less expensive, so far as the 50 works being in the public domain, and as a final resolution.

Posner apparently agreed, and said further, provocatively, "Did you think of filing an action for tortious interference?" with what the CDE was doing with Amazon?

Jonathan responded that the publisher hadn't wanted to incur fees once learning of the Estate's purported interest, and Klinger didn't want toincur the time and expense in intense litigations.

I might add that Posner (ingenously) queried Jonathan on whether or not Klinger had published previously. We all know that Judge Posner reviewed, with jaundiced eye, Klinger's annotated in The New Republic, back in 2004.

When Allison returned for his last go-round, Posner was still on the attack: "You want to tie anyone in knots who wants to write a Sherlock Holmes story."

"You have a vague notion of what you want...waving your arms and making huge circles. You're trying to intimidate."


So there you have it. We're not lawyers, nor do we play one on TV, but it seems fairly straightforward to us. We'll await the final opinion of the court. What do you think the outcome will be?