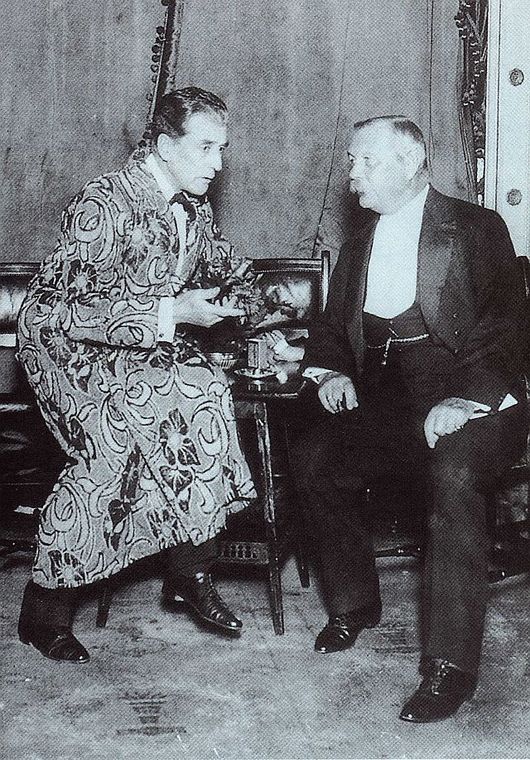 Long before Jeremy Brett assayed the role of the Sage of Baker Street, another Brett had worn the mouse-colored dressing gown. Eille Norwood (1861-1948) was born Anthony Edward Brett. For his stage name, he took Norwood from the London suburb where he lived (and which features in The Sign of Four and "The Norwood Builder") and Eille a variant of the first name of a former flame Eileen.

Norwood had a compulsion to get his Sherlock Holmes right. According to Alan Barnes in Sherlock Holmes on Screen “Norwood’s greatest contribution was his sheer diligence: he re-read all the Holmes stories to date prior to beginning work, learned scratch violin-playing and would study Strand magazine artist Sidney Paget’s Holmes illustrations for clues to costume and even posture.” Barnes also notes Norwood’s very Holmesian talent with make-up and disguise:


Another much-repeated anecdote has [managing director of Stoll Pictures] Jeffrey Bernerd attempting to have a ‘common-looking’ cabby removed from the set of A Scandal in Bohemia, completely unaware that the insalubrious ‘cabby’ was none other than Norwood wearing one of Holmes’ many disguises. Bernerd’s embarrassment was compounded by his earlier claim that Norwood would never be able to alter his stature and physique to the extent this particular disguise demanded."


Like the original short stories when they first appearing in the Strand, Stoll’s Holmes films were a hit with the public. And with early Sherlockians as well. Vincent Starrett in The Private Life of Sherlock Holmes: “Needless to say, when Mr. Norwood made up as Sherlock Holmes, he looked like Sherlock Holmes. His pictures were a trifle slow, but in fidelity to theme and period they frequently surpassed their more elaborate successors. All of the more famous tales were filmed for Norwood, and one at least—the Hound—was serialized.” Daniel Stashower reports in Teller of Tales: The Life of Arthur Conan Doyle: “Conan Doyle heartily approved of Norwood’s performance. At a 1921 testimonial dinner, he enthused over the actor’s ‘extraordinarily clever personation,’ adding that he had ‘never seen anything more masterly’ than Norwood’s performance in The Hound.”

Almost all of Norwood’s films have survived as “preservation material” but are rarely seen. The 2009 DVD Sherlock Holmes: The Archive Collection Vol. One contains The Man with the Twisted Lip. Now, if you are in the San Francisco area from May 29 to June 1 you can experience Eille Norwood as Doyle did, on the big screen at the San Francisco Silent Film Festival 2014 at the historic Castro Theatre (429 Castro Street, San Francisco, California). The festival showcases 17 silent features including 1923’s The Sign of Four on Sunday, June 1 at 5:00 pm.

The early 20th century saw many actors take on the role of Sherlock Holmes and Norwood is considered one of the best impersonators. If you attend the San Francisco Silent Film Festival, let us know at I Hear of Sherlock Everywhere what you thought of The Sign of Four and Norwood performance.