"Behold the fruit of pensive nights and laborious days, when I watched the little working gangs as once I watched the criminal world of London." [LAST] 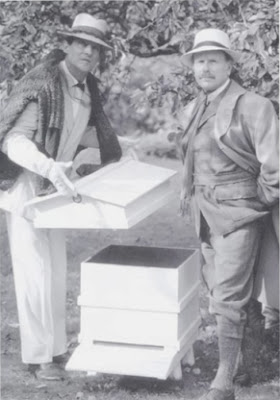 Trade Sherlockians like baseballs cards, the inaugural issue of the journal of the John H. Watson Society, the rebirth of an Ohio ACD/Holmes symposium, a review from 1924 of Conan Doyle's memoirs, the debate on whether Elementary is a force for good or for ill in the Sherlockian world continues, Jeremy Brett's 80th birthday, Ian McKellen talks bees in regards to an upcoming role, Sherlockian scion events past and future are reviewed and more in the latest Weekly Sherlock Links Compendium by Matt Laffey.

The Grand Game is an ambitious and exciting new project from Brian Rodgers whom has plans to release multiple sets of Sherlock-related trading cards: think baseball cards featuring the likeness of Sherlockian all-stars. There's a series of cards featuring various actors who have donned the deerstalker on the big and small screen as well as other Canonical items of interest. I'll be featuring some of the artwork on here over the next couple of weeks, though The Grand Game Facebook page already contains some preliminary art. Perhaps the most intriguing aspect to the project is the 60 card set dedicated to famous Sherlockians, past and present. Many of the names and faces are BSI Sherlockians you may be familiar including: Susan Rice (cf. below), Bob Katz, Peter Blau, Steve Rothman, Les Klinger, Steve Doyle, Jon Lellenberg, Mattias Boström, PJ Doyle, Joe Coppola and many more living Sherlockians whom, as well as being members of the BSI, also happen to be winners of the coveted Two Shilling Award, a distinction awarded to BSI members for "for continued prominent service".

Sherlockians adorning cards who have passed beyond the Reichenbach make up a virtual who's who of true Sherlockian All-Stars: Rex Stout (author of controversial 1941 paper "Watson Was a Woman" and Nero Wolfe literary agent), William Baring-Gould (creator of the original Annotated Sherlock Holmes) Vincent Starrett ("...where it is always 1895."), Jay Finley Christ (inventor of the 60 story abbreviation code), Julian Wolff, S. Tupper Bigelow, John Bennett Shaw (Sherlockian collector extraordinaire), Chris Steinbrunner (founder of one of my favorite scions The Priory Scholars of NYC), Michael Harrison (author of The Footsteps of Sherlock Holmes) and of course Christopher Morley and Edgar Smith. I'll keep everyone updated as this project progresses.

The John H. Watson Society showed the world just how serious this nascent group of Watson-centric enthusiasts really are by releasing Volume 1, Number 1 of The Watsonian, the journal of the JHWS, which will have reached the majority of subscribers/members this past week. Clocking in at just under 150 pages, The Watsonian is a publication which every Sherlockian will want on their shelf. "Aspiring to become a publication with some degree of the prestige of the Baker Street Journal or the Sherlock Holmes Journal of London, The Watsonian concerns itself with traditional and revisionist articles. Its purpose is simple: to illuminate the good doctor's life and accomplishment with regard to the many roles he takes, not only as Holmes's colleague, but also as physician, writer, man of the Victorian era and above all friend." (p. 7) Authors of note in this inaugural issue include: Bob Katz, Dan Andriacco, Don Yates, Don Libbey, Donald Pollock, Sandy Kozinn and many more. Also, make sure to read Dan Andriacco's short post on receiving his copy in the mail - and once your copy arrives make sure to read Mr Andriacco's essay entitled "Dr Watson, Detective?" in the current issue.

Dan Andriacco announced some rather exciting news on Baker Street Beat, particularly for Midwestern, USA-based Sherlockians with a penchant for Holmesian/Doylean conferences:


After a one-year absence, a seminar with a new name and a new sponsorship but much in the spirit of the original - exploring Victorian and Doylean topics as well as Sherlockian ones - is coming to Dayton [Ohio]. The Agra Treasurers, a scion society of the Baker Street Irregulars, for the first time will host 'Holmes, Doyle, & Friends' on March 14-15, 2014."

For a taste of what to expect, here's a review with photos of the 2009 Sherlock Holmes/Arthur Conan Doyle Symposium. For those familiar with Mr Andriacco's first McCabe/Cody novel No Police Like Holmes, rumor has it that the SH/ACD Colloquium (which was hosted by St. Benignus college in Erin, Ohio) portrayed in the novel was based on this long-running Ohio symposium.

Sidgwicks posted a couple of wonderful illustrations by A. Abramov for The Valley of Fear from a 1990 edition. I really love all the images Sidgwicks blog has been posting lately. Keep up the good work!

Times Literary Supplement contains 'Then and Now' review of Sir Arthur Conan Doyle's Memories and Adventures from 1924 by DL Murray: "A certain great man (it may not be forgotten) was very severe with the Doctor, his collaborator, for always bolting from the straight line of deduction in his record of a case, as soon as he caught sight of a bit of excitement or romance. “You have degraded what should have been a course of lectures”, he would say, “into a series of tales.” Perhaps he would have passed a similar criticism on the other Doctor whose life is told in this volume. If it is wisdom to map out a career and go forward on it with calculated steps, Sir Arthur Conan Doyle has not been wise. But that sort of rationality does not make lives which it is a pleasure to recall and fun for other people to hear about; just as detective stories worked out like Euclidean problems would not have made the books that we take care always to have somewhere in the house." (Thanks to Brenda for the tip!)


Sherlock Peoria in "A Report From the Front Lines" has this to say about Elementary:


And let's face it, as much as Elementary's supporters might strain to pull out Canonical detail from the show, would you rather encounter a new acquaintance who had never heard of Sherlock Holmes, or one that had only watched Elementary? Personally, I'd rather work with a blank slate than have to undo the web of weirdness that Elementary has laid over the top of our familiar story cycle."

In related Elementary news/controversy, Breitbart considers (thanks to IHOSE for the tip!) whether the show is "guilty of lowering the quality of its content because of politically-correct standards." Personally, I'm now completely caught up with the New York detective antics of Jonny Lee Miller and Lucy Liu and I'll admit two things: 1) I really don't think the show has much to do with Canonical (or otherwise) Sherlock Holmes and 2) I really enjoy watching 'Sherlock' and 'Joan' interact and am enjoying the show as a quirky TV 'procedural' (opposed to adaptation or pastiche).


Doyleockian remembers the birthday of perhaps the greatest of all actors to play the Great Detective, Mr. Jeremy Brett (1933-1995). This Sunday, November 3rd would be Brett's 80th birthday and though he departed this mortal coil almost 19 years ago, his memory and legacy live on with every new and repeat viewing of Granada's Sherlock Holmes. Alistair Duncan reminds his readers that: "for the 1980s and 90s Brett was the Holmes. Whether you liked his portrayal or not does not change this. His performance as Holmes crossed two decades and even the recent films of Robert Downey, Jr. were doing nothing to threaten his position in the Holmes pantheon." Remember to take a moment this weekend and raise a glass to one of the giants of Sherlockian culture. If you haven't read David Stuart Davies' terrific biography of Brett, now is the perfect time to track down a copy of Bending the Willow and spend and evening or two immersed in the time Brett spent becoming/being Sherlock Holmes.


Hypable reports on Ian McKellen's thoughts on playing a retired Sherlock Holmes in the upcoming adaptation of Bill Condon's A Slight Trick of the Mind (2014): "I’ve never had ambitions to play Sherlock Holmes, but this is Sherlock in a very particular place… he’s nearly 100 years old, and in retirement, and it’s more about being a beekeeper than it is being a detective." According to the Belfast Telegraph though, when McKellen was asked if movie-goers would see him donning a beekeeper's outfit, the 74-year-old actor said: "You certainly will! There will be plenty of nets too, because I am not going anywhere near any bees, I'll tell you that now. I have a healthy respect for bees. I love their honey, but that's about it." Read the complete interview with McKellen at Empire Online.


The Montague Street Lodgers of Brooklyn are having their 28th annual Autumn gathering on Saturday, November 23, 2013 at 6:30 pm at Caffe Buon Gusto on 151 Montague Street (of course). If you're in the NYC area, contact Peter Crupe for more information.

The (curious case of the) Watson Intelligence Playwrights Horizons’ upcoming production written by Madeleine George (The Zero Hour) and directed by Obie Award Winner Leigh Silverman (Chinglish, Golden Boy, The Call). "This new production features different Watsons from history, including Alexander Graham Bell’s Watson (as in, “Come here, I want you!”), IBM’s supercomputer Watson, and Dr. John Watson, assistant to you-know-who. It’s a time-jumping fantasy about the assistants and machines on whom we’ve come to depend." Click here for a video trailer of the play.


Sons of the Copper Beeches held their annual Autumn dinner last Friday, October 26, 2013 at The Racquet Club in Philadelphia (founded in 1889) where yours truly, after participating in a rather disastrous group rendition of 'The Musgrave Ritual', was elevated to 'Journeyman' status by Headmastiff Dr Bob Katz. A delightful evening was had by all as plans were hatched and drinks were drunk. As usual I missed the last Bolt bus of the night - always the mark of a fine evening - though I had more than enough to read while waiting for a train back to NYC thanks to Steve Rothman, editor of the Baker Street Journal, who had given me a healthy sized box of BSJ back issues to add to my growing collection.