A Textbook of Friendship 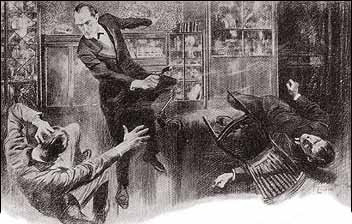 The Sherlock Holmes Canon is a textbook of friendship. With a relationship that spans at least 33 years - from their first meeting in A Study in Scarlet in 1881, to standing on the terrace with each other at the conclusion of "His Last Bow" in 1914 - the colleagues and erstwhile flatmates grew to appreciate each other's talents.

On Episode 28: Friendship, we discussed friendship, quoting from Christopher Morley's Sherlock Holmes and Doctor Watson: A Textbook of Friendship. It's one of our more intimate, thoughtful episodes and it bears another listen (or a first listen, if you haven't yet had the pleasure).


In the meantime, we'd like to show you how friendship might be expressed by Holmes and Watson today, as viewed through a YouTube fan's eyes. While this video is nearly two years old, YouTube user pokered44 manages to capture the fun and excitement that has become part of the fandom around Sherlock from the BBC.

Here we have Sherlock as it would appear if backed by the theme from Friends (which is "I'll Be There For You" by the Rembrandts).