Celebrating Movember with Mustaches in the Sherlock Holmes Stories

"Why, Watson, even your modest moustache would have been singed." [REDC] 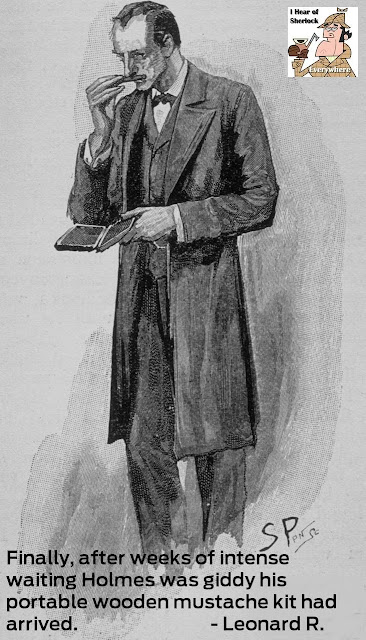 If you're not familiar with Movember, it's a social movement designed to bring awareness to and have an impact on men's health. This is accomplished by men growing mustaches for the month of November (hence "Movember") and getting the financial support of others. It's along the same lines as other charitable walks and marches, although this is less physically straining.

While there is no I Hear of Sherlock Everywhere Movember team this year (as a matter of fact, Burt, one of our podcast hosts, has gone the other direction of late), we thought it might be an appropriate time to pause and consider the many mustachioed men in the Canon.


Of course, the first person of whom we think when we consider mustaches in the Sherlock Holmes story is Dr. Watson himself. In "Charles Augustus Milverton" he was described as "a middle-sized, strongly-built man - square jaw, thick neck, moustache," and his schoolfellow Percy Phelps remarked in "The Naval Treaty" that he would not have recognized Watson "under that moustache." By the time we make it to "His Last Bow," Watson was "a heavily-built, elderly man with a gray moustache." Clearly, Watson kept his look over the years.

While mustaches in Victorian times were common - so common that an entirely new design of teacup had to be invented - they weren't completely ubiquitous throughout the Canon.There are no fewer than 17 mustaches mentioned in the stories (other than Watson's).

For the sake of brevity, I've listed all of the individuals here, along with the story in which they appeared, the type of role they played and any descriptors around each mustache:


If you'd like to learn more the blog Mustaches of the Nineteenth Century is as good a place to start as any. And the Gentlemen's Emporium has a wide array of mustaches for the whisker-challenged among you.

A note about the top image: this is the result of one of our Wacky Caption contests that we hold each Wednesday on our Facebook page. We'd be delighted if you joined us.