"I waited, filled with impatience for his return." [BRUC] 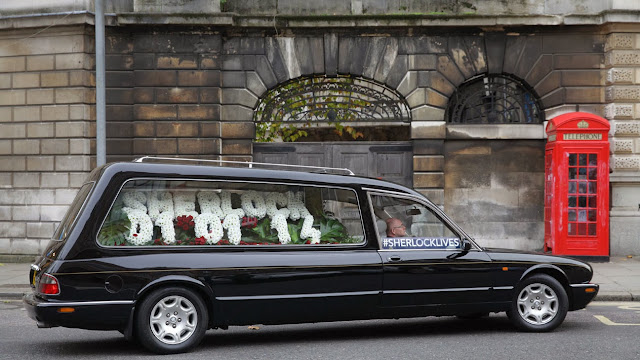 We've known for a while that Sherlock Series 3 would air on PBS Masterpiece on January 19. And we learned that the world premiere of Series 3 would take place during a special event at the British Film Institute on December 15. But the world has been waiting to discover the actual air date of BBC One's Sherlock in the United Kingdom.

Until now, that is.

Yesterday, a black hearse could be seen driving around London with a floral arrangement visible in the rear compartment that read: "Sherlock 01 01 14." The first episode, "The Empty Hearse," will make its way to television sets on January 1, 2014, followed by "The Sign of Three" on January 5, and concluding with "His Last Vow" on January 12. And just like that, Series 3 will be over.

The plot summary for "The Empty Hearse" is as follows:


"Two years after the devastating effects of [Series 2's finale] The Reichenbach Fall, Dr. John Watson has got on with his life. New horizons, romance and a comforting domestic future beckon. But, with London under threat of a huge terrorist attack, Sherlock Holmes is about to rise from the grave with all the theatricality that comes so naturally to him. It’s what his best friend wanted more than anything, but for John Watson it might well be a case of ‘be careful what you wish for’! If Sherlock thinks everything will be just as he left it though, he’s in for a very big surprise..."

So much for the UK and US. But what about air dates around the world? Our friends at Sherlockology have a  comprehensive guide for other countries, which at the time of publication included Poland, Denmark, Sweden and South Africa.

Wherever you view the new series, we hope you enjoy it and don't share any spoilers without warning people first!