"The Snow of the Day Before" [BERY] 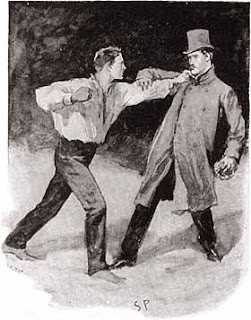 How's the weather where you are? Odds are that at some point this season, the fluctuating weather patterns have resulted in some extreme weather. And here in the United States at the moment, a good portion of the country is experiencing a fairly severe snowstorm working its way from the midwest to the northeast.

But how much of the Baker Street scene take place in the wintry months - or more pointedly, involve snow? Our searches show that "snow" or a variation on that word appear only 28 times in the entire canon of some 650,000 words. And the only story in which snow itself is featured is "The Adventure of the Beryl Coronet," with its very memorable opening:

It was a bright, crisp February morning, and the snow of the day before still lay deep upon the ground, shimmering brightly in the wintry sun. Down the centre of Baker Street it had been ploughed into a brown crumbly band by the traffic, but at either side and on the heaped-up edges of the foot-paths it still lay as white as when it fell. The gray pavement had been cleaned and scraped, but was still dangerously slippery, so that there were fewer passengers than usual. Indeed, from the direction of the Metropolitan Station no one was coming save the single gentleman whose eccentric conduct had drawn my attention.

In the Autumn 2010 issue (Vol. 60, No. 3) of The Baker Street Journal (you do subscribe, don't you?), the Editor's Gas-Lamp - the editorial that precedes each issue - Steve Rothman, BSI ("The Valley of Fear") mentioned Canonical weather conditions as part of some of his earliest memories of experiencing the Sherlock Holmes stories:

"As we dream by the fire"

Now that the autumnal equinox has passed and days are getting shorter, our thoughts turn - more than ever - to Baker Street. Something about the Canon gives off a greyish tone: a hint of clouds and cold, mixed with a desire to be indoors. Yet a quick leaf through Andrew Peck's and Leslie Klinger's invaluable compendium of chronological data "The Date Being --?"

shows that only about half of the stories in the Canon occur during the six darker months. We might just as well imagine Holmes shining forth in the most glorious summer, striding through sunny days, shedding light on the darkest of human events. Why don't we?

The most evocative scenes in the Canon are those that are set in the Baker Street sitting room. Watson draws us in by recounting his banter with Holmes and we, having entered 221B, are loathe to go out again. Also, we get to know Holmes best (not always first) in books and reading; and even sitting on a tree branch in midsummer is very much an interior activity.

Our fondest personal memory of reading the Canon for the first time is of a Saturday afternoon in early January. We had just checked out The Valley of Fear

from the library. As we opened the book, the skies went from brilliant, if weak, winter sunlight to dark grey clouds. Prone on the floor by the radiator, we learned of Porlock and the doings at Birlstone Manor. Slowly large snowflakes came down and continued to do so for the rest of the day and well into the night. But we cared not at all; we were upstate in the Vermissa Valley and needed to know just what evil the Scowerers were doing. The snow was shoveled late that Sunday; Bakerstreeting came first.

So for us, Baker Street is Holmes and Watson by their fireside discussing some hideous crime in the newspapers just before learning that a new unfortunate seeks their aid. Scholars have allowed mere facts to get in the way of truer perceptions. And that, of course, is the very core of Sherlockian scholarship: "Only those things the heart believes are true."

Whether the snow covers your landscape or the sun is shining today, we hope that Holmes is where the heart is. And please consider subscribing to the Baker Street Journal - it's the premier publication for Sherlockian scholarship, going strong since 1946. If not for yourself, consider it as a gift for the Sherlock Holmes enthusiast in your life.