"Really, Watson, You Excel Yourself" [HOUN] 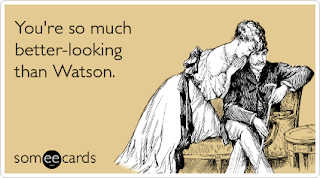 Earlier this week, an IBM computer named Watson beat two humans in a showdown on Jeopardy! amid a wave of publicity.

This was a huge step in the field of artificial intelligence (A.I.) and the ability for a computer to understand conversational language. The bonus is that it shared the same name as Sherlock Holmes's Boswell. In reality, it was named for T.J. Watson, the founder of of IBM, but it had more of the quality of Holmes, of whom Stamford said in A Study in Scarlet: "You seem to be a walking calendar of crime."

The future of this technology, appropriately enough, seems to lie partly in the field of medicine, as IBM said it will "collaborate with Columbia University and the University of Maryland to create a physician’s assistant service that will allow doctors to query a cybernetic assistant."

We wonder how Watson would have fared at the Battle of Maiwand, had his orderly Murray been an electronic assistant...

Please consider visiting our sponsors (in the right column and footer of the site) from time to time. It helps defray the costs associated with running this site.
--
2/19/2011 02:21:00 AM
blog, fun, News