"From the Dummy's Chair" [MAZA] 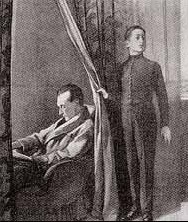 Editor's note: This is the first post of a new feature on the Baker Street Blog we're calling "From the Dummy's Chair." Joining us to guest post for this column is Steven Doyle, BSI ("The 'Western Morning News'") is the author of the Edgar-nominated Sherlock Holmes for Dummies

. Because of the limitations in the print world, he wasn't able to completely fit everything he wanted into the book. This series will become a real-time continuation of that labor of love. Steve is also half the team behind the Wessex Press.
The Deuterocanonical Adventures of Sherlock Holmes
When Sherlockians have worked their way through the entire Sherlock Holmes Canon, the inevitable emotion is a sort of sadness that the original tales are now finished. It’s out of this desire for more original Holmes stories that readers turn to what is commonly referred to as “The Apocrypha” — the deposit of Sherlockian writings not formally included in “The Canon” of sixty accepted Sherlockian tales. And no, I’m not talking about pastiche. The Apocrypha is comprised of actual Sherlockian writings by none other than Sir Arthur Conan Doyle — writings that relate events and information about Sherlock Holmes that aren’t in the Canon.
The fact that these writings are called “The Apocrypha” is interesting. It isn’t a term that was casually or accidentally applied. The term it reflects the very origins of the Great Game of Sherlockian scholarship which began as a spoof of Biblical deconstructionist scholarship. Father Ronald Knox’s essay “Studies in the Literature of Sherlock Holmes,” originally published in his 1911 and later collected in his book Essays in Satire, began a longstanding tradition of using Biblical terminology in reference to Sherlockian scholarship. Thus we have “Sacred Writings,” “The Master,” “The Canon,” and…“The Apocrypha.”
In considering the Sherlockian Apocrypha, the religious parallels continue to hold. Just as in Christianity, the nature of the apocryphal works is disputed, or at least there is disagreement. In Christendom, there are the “Protocanonical” works, those sacred writings that have always been received without dispute. In Sherlockiana, this would be the standard sixty tales.
But then there are the writings that are contested. In Christendom, Protestant denominations consider these works apocryphal. Catholics accept them and thus call them Deuterocanonical. So, if you are a Sherlockian that believes these extra writings should be brought into the Canon, then you should call them Deuterocanonical…if you think they don’t belong, then “Apocrypha” is the right term.
The word Apocrypha is derived from the Greek apokryphos, meaning “hidden.” In this recent era of Da Vinci Code

mania and interest in hidden gospels, the term is certainly appropriate.
So, just what are the Apocryphal Writings of Sherlock Holmes? Well, not only is there dispute about whether or not they should be in the Canon, there is disagreement about what should be considered the apocrypha. There are different schools of thought, with different philosophies.
Basically, it comes down to three camps:
You can find information on the internet about this material, but there are four published works that are authoritative. The first was Sherlock Holmes: The Published Apocrypha

, edited by Peter Haining; and The Apocrypha of Sherlock Holmes

, edited and annotated by Leslie S. Klinger, published by Gasogene Books.
Editor's note: Next week, Steve's column will feature the candidates for the Aporcrypha, in chronological order, with information about each.
Related items
2/03/2011 02:21:00 AM
blog, recurring feature, Sherlock Holmes for Dummies