A Clever Publicity Play for "The Creeping Man"

John Bennett Shaw, BSI ("The Hans Sloan of My Age") once said that the only requirement for a Sherlockian society meeting is "two Sherlockians and a bottle. In a pinch, dispense with the other Sherlockian." As a result, One would think that all we Sherlock Holmes enthusiasts do is drink.

Well, yes. But that's not all. We certainly enjoy the company of the people that Holmes brings together. And the food

as well. When it all comes together - food, drink and the company of kinspirts - it makes for a wonderful experience, as Brad Keefauver wrote about a few years back on Sherlock in Peoria.

But when you delve into the history of the Baker Street Irregulars, you'll find that the early leadership included such libation-inspired offices as the Tantalus and the Gasogene and that early meetings took place in a speakeasy. Not exactly what you'd call teetotalers. But probably inspired by a few mentions of adult beverages in the Canon:


"Between your brandy and your bandage, I feel a new man." [ENGR]

"...I found my collar-ends undone and the tingling aftertaste of brandy." [EMPT]

This recent bit of artwork provides a nice homage to some of the characters we've come to know in the stories, with cocktails concocted to represent their personalities (note: one or two may represent individuals active on the forum from which this graphic was posted).

But the one cocktail that intrigues us is one called the Monkey Gland.
It's made of gin, orange juice, grenadine and absinthe, and seems to promise something of vigor.
Created in Paris in early 1923 (as seen in the April 23, 1923 Washington Post article below), its origins seem to have something of a marketing ploy about them. Click through to read more about the history of the drink. 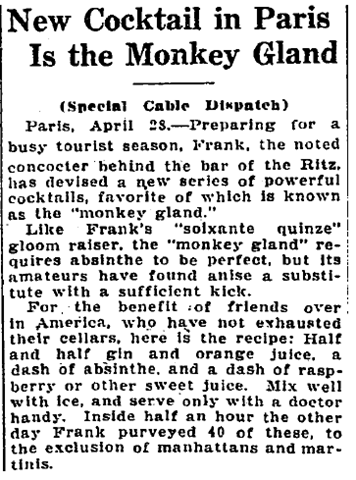 But for us, there's an interesting bit of timing involved. "The Adventure of the Creeping Man" was published in March 1923 and - without giving away too much - concerns an elderly professor who goes to extreme lengths to win the affections of a younger woman.
Let's just say he would have enjoyed the above drink.

Was Conan Doyle inspired by Frank's concoction? Perhaps he even visited the Parisian establishment and partook of the drink himself. Or perhaps the era of Prohibition inspired such outre innovations in the bartending world.
What do you think?