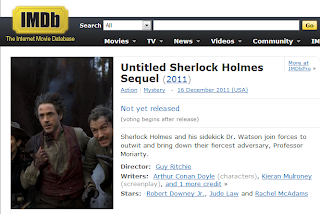 The sequel to Sherlock Holmes

Since it involves Professor Moriarty, one might conjecture that the title would be something along the lines of Sherlock Holmes: The Final Problem or Sherlock Holmes: Reichenbach Falls. Or something inspiring and thrilling, like some of the titles from the Rathbone-Bruce days in the 1940s: Sherlock Holmes - Dressed to Kill

Well, Warner Bros. are treating us to an explosive sequel, certain to continue the action-packed elements of the first. And they're backing that up with a title to match: Sherlock Holmes: a Game of Shadows.

Or perhaps better put by the sages at E! Online: By Jove, Sherlock Holmes Sequel Has a Lame Title! They even include a slideshow on the worst sequel titles, capped with Breakin' 2. Reminds us of when Wessex Press held the sequel to their Gillette to Brett conference in 2007. We joked that they should have called it Gillette to Brett II: Electric Boogaloo.


What are your thoughts on the name of the new sequel? Take the poll and let us know in the comments section.