Connoisseurs of Sherlockian sculpture have another city to visit if they care to indulge their artistic preferences. Interfax is reporting that a Sherlock Holmes statue will appear in Moscow. 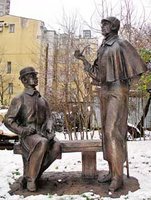 Sergei Petrov, the head of Moscow's Monuments Committee, says that the committee "has decided that there needs to be a monument of Sherlock Holmes and Doctor Watson in Moscow." According to the article,


"The statue is to open near the British Embassy on the banks of the Moscow River under the auspices of the Moscow-based non-profit foundation Cultural Dialogue/One World. The organisation has said it wants to unveil the monument later this year or early 2007.

"No design has yet been chosen, however, and Petrov, of the monuments committee, said a closed competition would determine the architect."

While it may seem a little odd that Holmes should appear in Moscow, it should come as no surprise to those attuned to the distant whine of the Russian television set. Vasily Livanov has made the character immensely popular again - and he himself is up for an Order of the British Empire.


Let's hope that the sculptor isn't too liberal in his approach. If he uses Livanov as a model, I'm sure many fans will be pleased.

For those of you who are able to understand it, here is an article about the statue in Russian.

If no design has been chosen and the statues haven't been unveiled yet, then who are these people?

Further reports from Moscow indicate that the statues have been completed and are just waiting for confirmation of the site. The photo is quite low resolution, but there certainly is a resemblance to Mr Livanov - and even more obviously to Vitaly Solomin.